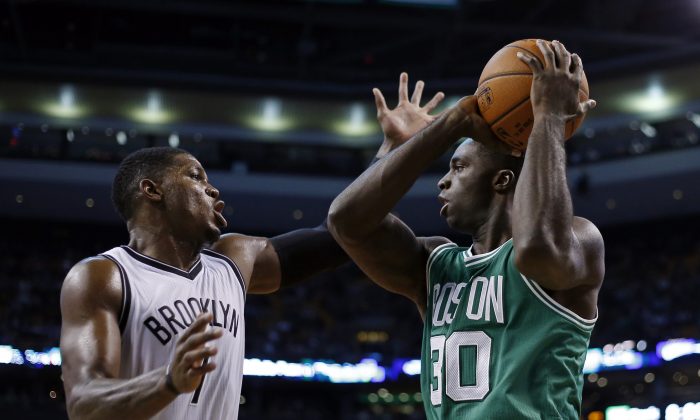 The NBA season is in full swing and the trade rumors are starting to heat up.

Bass Being Shopped by Celtics

Brandon Bass is playing well for the Boston Celtics, but that could easily mean he’ll be shipped out since the team is trying to acquire younger pieces and draft picks.

“Scouts and opposing front-office types have begun to speak and inquire about the 29-year-old forward, a practice that’s generally a precursor to discussing a trade. Danny Ainge could not be reached on whether teams have called about Bass — not that he would say anyway — but it certainly makes sense,” reported the Boston Herald.

Teammates said that they understand why teams are inquiring about Bass.

“If there’s a team competing for a championship and they could steal him, that’d be big,” said Rajon Rondo.

“He’s one of the best mid-range shooters in the league. “He’s a professional. That’s why he’s here. That’s why he’s getting paid the big bucks. He does what it takes to stay at this level, and he’s playing at a high level.”

Rondo himself has been subject to trade rumors, but CSN claimed, citing a league executive, that Jeff Green’s value is as strong if not stronger than the star point guard’s.

Andrei Kirilenko seems to be on his way out of Brooklyn, the question is what team will trade for him.

The Phildelphia 76ers were initially linked to the forward, but now it’s emerged that he may return to the Utah Jazz, where he played for a decade.

“Word is Brooklyn’s market for Andrei Kirilenko is expanding beyond merely dispatching AK-47 to Philly,” said Marc Stein of ESPN.

“One intriguing option, if Nets wait ’til Dec. 15 when trade market expands, is said to be AK-47 back to Utah for Jeremy Evans/Toure Murry.”

Ohm Youngmisuk of ESPN had said previously that the Nets had preliminary talks about moving both Kirilenko and Sergey Karasev. The Sixers would “likely waive Kirilenko,” he said.

The Cleveland Cavaliers have also been linked to Kirilenko, but to a much lesser extent.

The Cavs have a number of other players on the radar as well, as the team looks for a swingman and a rim protector.

Timofey Mozgov of the Denver Nuggets is one target, but sources told Sam Amico of Fox Sports that the team hasn’t been able to put together a satisfactory deal for him.

“While the Cavs like having Shawn Marion in the starting lineup, they would also love to find a viable wing so Marion can move back to his intended role off the bench. Marion adds defense to a second unit in dire need of it — and as a backup small forward, would greatly assist in the area of preserving LeBron James,” he said.

“Nothing is close on rumored trades involving the Cavs and swingmen Corey Brewer (Timberwolves) or Andrei Kirlenko (Nets).”

The 76ers have stacked up in the last two drafts, nabbing Nerlens Noel and Joel Embiid, but either one could go if they get one of the top draft picks in the upcoming draft and get Jahil Okafor.

“They will probably trade one of the bigs they currently have instead of Okafor,” one NBA source told Zags Blog.

“Or the Sixers could trade the pick itself for more assets. After all, they need just about everything,” the blog said.

“Or the Sixers could miss out on landing the No. 1 pick and Okafor could be chosen by someone else — even the Knicks.”