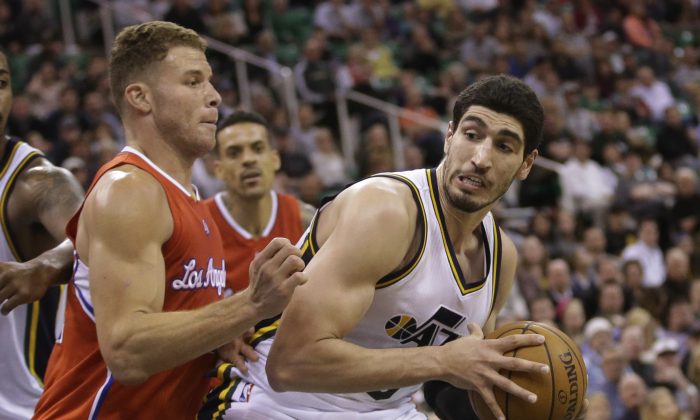 The NBA trade deadline is coming up fast, and a new series of moves is set to happen soon as a new deal went down on Tuesday.

The Charlotte Hornets acquired Mo Williams and Troy Daniels from the Minnesota Timberwolves for Gary Neal and a second-round pick. It’s certainly not a huge deal, but could easily signal another series of trades, as we saw earlier in the season. Indeed, just after the deal was reported, the Timberwolves acquired rookie Adreian Payne from the Atlanta Hawks for a first-round pick.

The latest buzz includes another player from the Timberwolves–Kevin Martin–as well as a slew of other players on struggling teams, such as the Denver Nuggets.

Enes Kanter is perhaps the most interesting name to crop up lately, and there’s new information on that front. Check out the latest buzz below.

Kanter Could be Dealt

The quick emergence of Rudy Gobert has lowered Enes Kanter’s value on the Jazz, and could prompt the team to deal him.

The 6’11” big man is only 22, but will be a restricted free agent this summer. He’ll likely draw lots of interest. Gobert, on the other hand, is signed to the Jazz for two more season after this one.

“The argument to trade Kanter is a convincing one, citing his lack of defensive presence and inconsistent effort and contribution. Kanter provides Jazz fans with headaches they are all too familiar with, having watched Carlos Boozer and Al Jefferson dominate the ball offensively without providing equal effort on defense,” noted KSL.

“In addition, Kanter could sign a lucrative contract offer this season, similar to the one Gordon Hayward signed this past summer, averaging over $16 million a year. Outlandish as that may seem, a desperate team with unspent money may feel obligated to make a splash in free agency, and Kanter could be the benefactor. If the Jazz found this offer too large to match, they could lose the former lottery pick for nothing in return.”

Still, the outlet notes that Kanter’s ceiling has yet to be realized due to his young age and the fact that this is his first full season as a starter. Gobert is flourishing, but still largely unproven. It could be worth it for Utah to keep Kanter, Gobert, and Derrick Favors for now.

Martin, the 32-year-old scorer, is rumored to be on the block as well.

“He is owed $14 million over the next two seasons but could be a valuable asset to a team looking for scoring punch off the bench. Dallas and Washington are among the possibilities,” reported Chris Mannix of Sports Illustrated.

However, reports later noted that the Wizards have not been targeting Martin. Washington was wrongly linked to Nate Robinson recently as well.

Martin does provide a scoring punch, having a career average of 18 points a game on 45 percent shooting, and 38 percent shooting from behind the arc. He’s shooting a nice 40 percent in Minnesota this season.

Injuries are a concern, as Martin has only played in 17 game so far this season. Martin also costs a lot–he’s set to make over $7 million in each of the next two seasons.

The Boston Celtics have been one of the most active teams on the market, dealing veterans Rajon Rondo and Jeff Green and also helping facilitate another deal.

League executives told the Boston Herald that Tayshaun Prince is the most valuable player in terms of trade value. He can still contribute to a team and he also has an expiring contract of $7 million.

“He knows how to play, and he’s played in big games. Someone hoping to make a playoff run is going to want him, even if it’s just for depth or insurance,” said one source. However, the asking price is likely lower than usual since teams expect Prince to be bought out if he isn’t traded.

Marcus Thornton, also with an expiring contract ($8.6 million), could also be nabbed. He brings outside shooting and okay defense.

The other veteran on the block is Brandon Bass, although no one has offered anything for him as of yet.

“It’s crazy,” said one Western Conference source. “People have seen how well he’s played in Boston, but it’s as if they’ve backed off him because of how he played in Dallas or Orlando. I don’t get it. We don’t have a need for him right now, but whoever gets him is going to like what he can do, even if it’s just in limited minutes.”

The Portland Trail Blazers have seen most of the other West contenders make at least one deal, and are looking into possible trades.

“When you look at a lot of the trades that have happened to this point, they’ve brought in impact players, with the exception of probably one situation all of those players went into the receiving team as starters. And (those) teams conveyed significant assets and they ended up with a starter. We aren’t trading anyone in our starting lineup. That is our starting lineup. It’s one of the best starting lineups in the league. It’s our core. We’re committed to not only having them this year but in the future. We’re not touching that,” vice president of basketball operations Neil Olshey told Oregon Live.

“We’re in a different situation because if were we to do something we’re going to need to find an impact player that not only fits contractually, not only fits culturally and skill-wise but is somebody that’s going to be able to come in and play a role that we don’t think the guys that are here currently are capable of filling.”

The Blazers biggest needs right now are a backup big man with Joel Freeland still out, and a wing player.