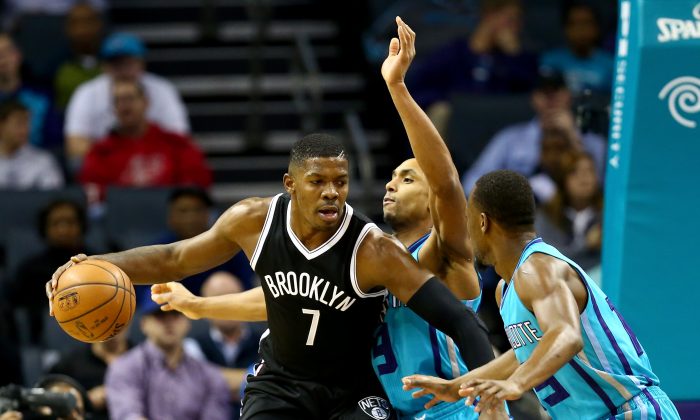 Joe Johnson #7 of the Brooklyn Nets during their game at Time Warner Cable Arena on December 13, 2014 in Charlotte, North Carolina. (Photo by Streeter Lecka/Getty Images)
NBA

The latest NBA trade rumors feature Eastern Conference teams in the playoff race, with just a few weeks before the deadline.

The biggest rumor is the Charlotte Hornets contemplating sending Lance Stephenson and two other players to Brooklyn for Joe Johnson.

The trade would be somewhat risky for both teams, but could also provide what both are looking for.

The Nets have been trying to unload Johnson, Brook Lopez, and/or Deron Williams for a while now, seeking at least something in return. They don’t want to just jettison players, as they’re still in the playoff race.

The Hornets, just ahead in the race, now need a proven scorer to help carry the team while Kemba Walker recovers from injury.

Sources told Yahoo that the teams have restarted trade discussions, eyeing a deal that would see Stephenson, Gerald Henderson, and Marvin Williams go to Brooklyn for Johnson.

Everyone’s thinking the Nets will trade at least one of their “big three” before the deadline, and it appears Johnson could be the first out.

The New York Knicks are shopping their veterans, including point guards Jose Calderon and Pablo Prigioni.

The latter has gotten little playing time as the Knicks try to develop younger players such as Langston Galloway, leaving Prigioni as an obvious player on the block.

“Hearing the #Knicks would like to deal Pablo Prigioni for a 2nd-round pick. He’s not playing now & not part of the future,” noted SNY.tv’s Adam Zagoria.

Two teams have been linked to the vet–the Cleveland Cavaliers, who are seeking a relatively cheap backup point guard, and the Detroit Pistons.

Detroit lost starter Brandon Jennings for the season to injury, and their backup D.J. Augustin is now the starter, so they need a backup.

Expect one of the teams to move soon.