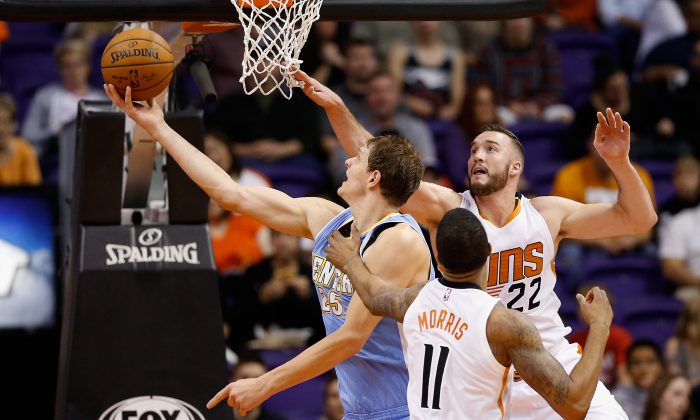 Timofey Mozgov #25 of the Denver Nuggets lays up a shot past Miles Plumlee #22 and Markieff Morris #11 of the Phoenix Suns during the second half of the NBA game at US Airways Center on November 26, 2014 in Phoenix, Arizona. (Photo by Christian Petersen/Getty Images)
NBA

A stunning three-way trade was pulled off on Monday night, which only fueled the nonstop NBA trade rumor mill.

The Cleveland Cavaliers acquired their highly-sought after defensive swingman in Iman Shumpert, but failed to snag a rim protector, leaving them as the top team in most rumors.

The Cavs are desparately trying to find a big man after Anderson Varejao went down for the season. Even before the injury the team was looking for upgrades in the frontcourt.

Thea team has been linked to Timofey Mozgov of the Denver Nuggets, and sources told Adrian Wojnarowski of Yahoo that the Cavs are still pursuing him.

“Denver still reluctant to deal him,” he added.

Mozgov is playing 25.9 minutes a game and starting for the Nuggets, but as the team increasingly looks to have no chance of getting to the playoffs, some have posited that Denver will start moving players to try to revamp the team.

Mozgov addressed the speculation, telling the Denver Post: “My friends talk about it, but I just say, ‘If you’re talking, don’t invite me, OK?’ It’s simple. They can talk about it with each other, but I know nothing about it.”

Sam Amico of Fox Sports Ohio confirmed that along with Mozgov, the Cavs are still trying to snag Grizzlies big man Kosta Koufos.

The Cavs could also pick up Samuel Dalembert, who the Knicks are reportedly going to waive if they can’t find a trade partner.

Calderon Could be Next

The New York Knicks have completely given up on this season, sending two of their best players away in the three-way deal and getting virtually no one in return.

Now talk is turning to the team getting rid of veteran guard Jose Calderon to open up even more cap space.

“Yes, Calderon is 33 with his best years behind him and $15 million remaining on his contract beyond this season. But he is not done — he shot 42 percent from downtown for Dallas in the playoffs last season as they took the eventual champion Spurs to seven games in the first round,” Chris Sheridan wrote.

The Sacramento Kings could offer Derrick Williams, who will be a restricted free agent after this season, for Calderon. Jackson would be attracted to the expiring contract and the potential upside in Williams if he plays well for the Knicks. Calderon would likely come off the bench for the Kings.

The Houston Rockets are the other team Sheridan says should pursue Calderon. “If you are Rockets general manager Daryl Morey, watching your team become more and more dependent on James Harden while watching Dwight Howard’s production plummet, do you make a run at a player who would be an upgrade offensively over Patrick Beverley?” Sheridan wondered.

“With Jackson apparently looking for little more than a second-round draft pick, do you offer the Knicks back the second-round pick that you stole from them a couple years ago in the Marcus Camby trade? That pick, along with Jason Terry and his expiring contract, might get a Calderon deal done.”

One young prospect being shopped is Glen Rice Jr. of the Washington Wizards.

Rice was the MVP of the Summer League in 2014, but wasn’t able to get a spot in the Wizards rotation. Paul Pierce and Bradley Beal have the starting positions locked down, and Rasual Butler and Otto Porter Jr. have solidified spots behind them. Martell Webster and Garrett Temple are also ahead of Rice.

The Washington Post said that the team wants to move Rice before his contract becomes guaranteed on January 10.

Rice has been playing for the D-League since late November, although he hasn’t played much there lately either.

The Wizards will likely waive Rice if they can’t find a partner, the source told the Post.

Rice, 24, averaged 12.7 points in 14 games for the Fort Wayne Mad Ants in the D-League. He was dismissed from the basketball team at Georgia Tech in March 2012, and got drafted into the D-League that November. The Philadelphia 76ers picked him in the second round of the NBA Draft in 2013, and immediately traded him to the Wizards.