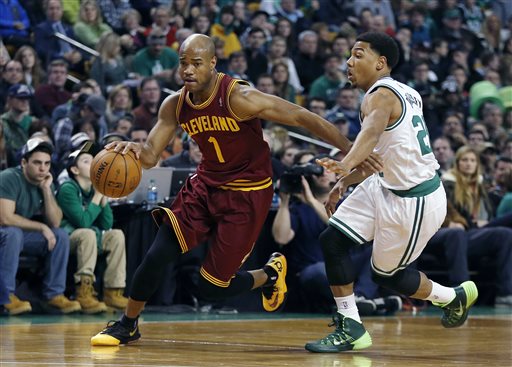 In this Dec. 28, 2013 file photo, Cleveland Cavaliers' Jarrett Jack (1) drives past Boston Celtics' Phil Pressey (26) in the second quarter of an NBA basketball game in Boston. A person familiar with the deals says the Cavaliers have agreed to trade Jack, swingman Sergey Karasev and center Tyler Zeller, moves that can help their pursuit of LeBron James by clearing salary cap space. (AP Photo/Michael Dwyer, File)
NBA

The NBA trade rumors keep flying as a number of teams are looking to make deals. Several trades took place on Wednesday and Thursday.

The Cavs and Boston Celtics confirmed the deal on Thursday when the NBA moratorium on signings ended.

Cleveland sent guard Jarrett Jack and swingman Sergey Karasev to Brooklyn and center Tyler Zeller and a first-round draft pick to Boston. Cleveland acquired a future conditional second-round pick from the Celtics and the draft rights to forwards Ilkan Karaman and Edin Bavcic from the Nets. The Celtics will get guard Marcus Thornton — and his expiring $8 million contract — from the Nets.

The deal, first reported on Wednesday, is designed to give the Cavs enough room under the salary cap to offer James, the four-time league MVP, a maximum contract ($20.7 million).

James, who met in Las Vegas with Miami president Pat Riley, has not announced where he will play next season. He is scheduled to attend the World Cup final in Brazil this weekend.

Jack, who signed with Cleveland as a free agent last season, was scheduled to make $6.3 million, Zeller will make $1.6 million and Karasev $1.4 million.

In trading those salaries, the Cavs have enough to give James the max deal — if he decides to sign with Cleveland. James played seven seasons with the Cavs before leaving as a free agent in 2010.

Amare Stoudemire’s stock has dipped in the past few years and the Knicks would much rather have Carmelo Anthony back then retain Stoudemire.

The big man has a $23.4 million contract, which the team wants to move.

New Knicks president Phil Jackson has talked to multiple teams recently–including the Philadelphia 76ers–about moving Stoudemire so more cap space will be freed up. The Sixers are known now for being willing to take on contracts most other teams wouldn’t want as part of their rebuilding phase.

“Moving Stoudemire and his $23.4 million contract would allow the Knicks to take back players in a sign-and-trade and could give them more money to offer free agents such as Pau Gasol,” reported ESPN.

Anthony reportedly reached out to Gasol to see if the center would be interested in playing for the Knicks if Anthony signs with them.

The trade may happen but the Sixers want an extra piece in the trade, according to the New York Post. “The Sixers have $30 million in cap space and have made it known they’d be willing to accept an undesirable expiring contract if a pawn is thrown in. That extra pawn likely would be Iman Shumpert — something the Knicks prefer not to do.”

The Kevin Love talk has died down some as many teams became more interested in Anthony, LeBron James, and Chris Bosh, but there is still some interest in the Minnesota Timberwolves forward.

Love reportedly told the team that he wants out. He only has one year left on his contract. Minnesota has been shopping him around but the price will be high. The Golden State Warriors have frequently been named as a frontrunner.

“Ainge is attempting to gather assets to acquire Kevin Love, convinced he can devise a package that would entice Minnesota Timberwolves president Flip Saunders to move the three-time All-Star,” it said.

“You never know what to expect,” Ainge said Monday. “When you have conversations, I have a great deal of respect in the league and what they’re all trying to accomplish. I don’t know what’s going to shake out when it’s all said and done.”

Among the pieces Ainge may offer is rookie James Young but may also have to acquire another piece with a draft pick or two then move that piece in the trade.

An option is a sign-and-trade for Lance Stephenson, who the Celtics would then move to Minnesota.

The Jazz also received the rights to New York’s second-round draft pick in 2017 as part of the deal, which was struck last Friday but formally announced by Utah on Thursday per league rules.

The 6-foot-10 Novak has a .432 3-point percentage over his eight-year career, second only to Golden State’s Stephen Curry (.440) among active players.

Novak, the 32nd overall pick in the 2006 draft out of Marquette, has averaged 5 points and 1.4 rebounds in 13 minutes over 414 career games, playing with Houston, the Clippers, Dallas, San Antonio, New York and Chicago.

Last season he averaged 3.3 points, 1.1 rebounds and 10 minutes per game over 54 games with the Raptors.

Novak was acquired by Toronto in a deal last July that sent forward Andrea Bargnani to the Knicks in exchange for Novak, Quentin Richardson, Marcus Camby, and future draft picks.