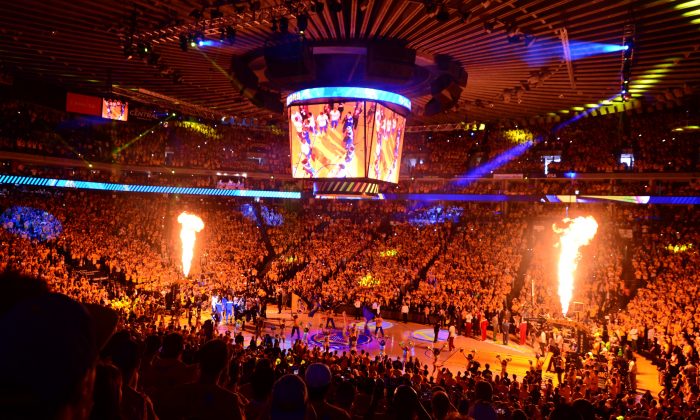 Players from the Golden State Warriors and Cleveland Cavaliers are introduced prior to the start of Game 5 of the 2015 NBA Finals at the Oracle Arena in Oakland, Calif., on June 14, 2015. (Frederic J. Brown/AFP/Getty Images)
Opinion

Billboards must be living creatures, for they appear to propagate like breeding rabbits.

They spread everywhere, growing to enormous sizes while shouting corporate messages at us. Some even watch and track us with their digital eyes.

Now, though, rather than billboards becoming human, we humans are becoming billboards. Literally.

For the love of money, the National Basketball Association is transforming its chief human asset—basketball players—into advertising placards that run, dribble, leap, twist, and dunk.

While individual golfers and racecar drivers have long splattered themselves with their sponsors’ logos, NBA teams are now planning to become the first major U.S. sports crews to sell ad space on their players’ game-day jerseys.

Chintzy? Well, yes—but not cheap. Team owners expect brand-name corporations to pay $10 million or more to have their logo plastered on the chests of basketball stars.

Calling this a “stylistic move,” the mammon-worshipping owners say the ads will be modest—just a two-and-a-half inch patch displaying the corporate logo of, say, Budweiser, Bank of America, Hooters, or Viagra.

The logos may seem small, but ESPN’s high-def TV cameras will focus on them and show them to viewers hundreds of times each game. And, of course, to squeeze ever-more cash out of each human billboard, both the owners and advertisers will steadily expand the commercial space to cover the entire uniform.

Actually, I’m not 100 percent opposed to ads on uniforms. I’ve been saying since the Clinton administration that presidents and Congress critters should have to slap the corporate logos of their big funders on their suits. At least then we’ll know who they’re working for.

It’s my truth-in-politics proposal, and I hope you’ll push it, too.