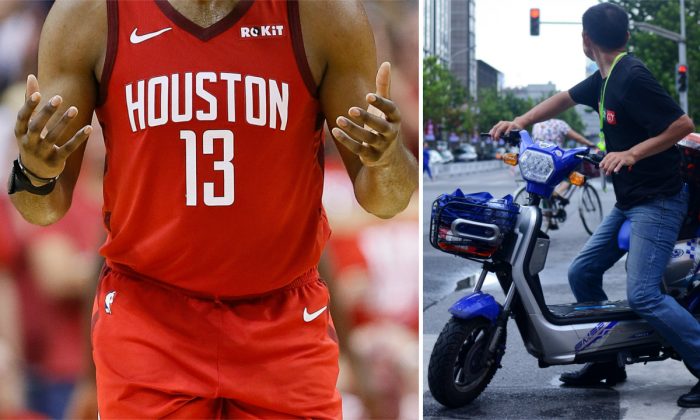 NBA Superstar James Harden on Moped Pulled Over in Shanghai

NBA star James Harden was pulled over by police while joyriding on electric mopeds with a group of his friends, according to multiple Chinese media outlets.

Photos and videos show the Houston Rockets point guard riding with a group of friends on electric mopeds, and subsequently being stopped by a police officer.

Local media reported that he and his entourage were stopped for breaking local regulations, including riding with multiple people on one vehicle, and going the wrong way down the road. Reports did not include if he was given a citation or a fine. Harden was stopped at about 3:00 p.m. on June 29.

Harden is touring China on a promotional event for Adidas, and had already visited Beijing and Guangzhou according to the South China Morning Post.

Harden is immensely popular in China, and many fans quickly pulled out their phones upon seeing the star ride by, while some even took a chance at greeting him in English.

After the incident, Harden took to Weibo, China’s version of Twitter, to make an apology. He explained that he was trying to enjoy the city, and appreciated everyone’s understanding.

Chinese memes quickly started popping up. One of the most popular ones in response to his apology says, “Now, a handsome young man, quietly passes by on his electric moped.”

Other users joked online that the police may not even know who Harden was, while everyone else wanted his autograph. One user named “Eddie Is Occupied” wrote: “Harden is a man who gets a whistle wherever he goes.”

Some of Harden’s warm welcome in China may also come from him playing for the Rockets, the team which once had Yao Ming on their roster.