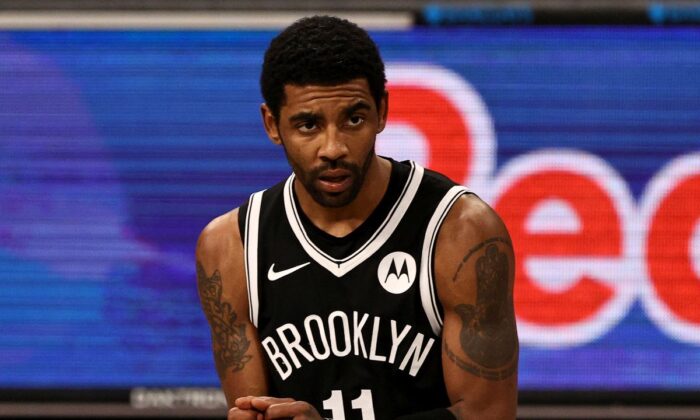 Kyrie Irving #11 of the Brooklyn Nets reacts in the second half against the Miami Heat at Barclays Center in New York City on Jan. 23, 2021. (Elsa/Getty Images)
NBA

Brooklyn Nets star Kyrie Irving was not able to enter the Barclays Center in Brooklyn and missed the team’s media day amid the citywide mandate that forces anyone entering a sports venue to show proof of COVID-19 vaccination.

Irving, who appeared in a Zoom call on Monday, requested privacy when asked about his COVID-19 vaccination status. His other teammates appeared in person in the Barclays Center.

“I appreciate your question, bro,” Irving said in response to a question about the vaccine. “Honestly, I like to keep that stuff private, man.” He said he would “handle it the right way with my team and go forward together with a plan. So, you know, obviously, I’m not able to be present there today. But that doesn’t mean that I’m putting any limits on the future of me being able to join the team.”

When a reporter pressed further, Irving said, “Please respect my privacy … Next question.”

New York City’s mandate, which was unveiled in early August, requires that every Nets player or employee have had at least one vaccine dose before entering the arena or practice facility. The same mandate also applies to gyms, theaters, and restaurants, triggering protests in recent days.

Nets general manager Sean Marks told reporters several days ago that several people on the team won’t be able to enter the Barclays Center due to the COVID-19 mandate that was handed down by New York City. He didn’t say who.

“I won’t get into who it is,” Marks said, “but we feel confident in the following several days before camp everybody would be allowed to participate.”

It came after Irving’s aunt, Tyki, suggested to Rolling Stone that her nephew isn’t vaccinated.

“He is going to try to figure that out as it comes, because it’s not religious-based, it’s moral-based,” she told Rolling Stone. “You may have to sit on the sideline, you might not have to be in the arena during this. If it’s that freaking important to get a vaccine that, hell, it’s still not preventing the COVID, then I’d rather them working it out that way than to say, ‘Hey, if you don’t get the vaccine, then you can’t be a part of the franchise that you [expletive] helped build.'”

Last week, the NBA announced that it had declined a vaccine exemption request from Golden State Warriors forward Andrew Wiggins amid similar laws in the Bay Area, California.

A number of other NBA players, in recent days, have revealed that they aren’t vaccinated.

“I don’t think you can pressure anybody into doing things, or putting things in their body,” Washington Wizards guard Bradley Beal said Monday. “I would ask the question to those who are getting vaccinated, ‘why are you still getting COVID?,” he asked, adding: “You can still get COVID and still pass it along it vaccinated.”

The Nets’ first preseason game in Brooklyn is on Oct. 8.

The Epoch Times has contacted the Nets and NBA for comment.