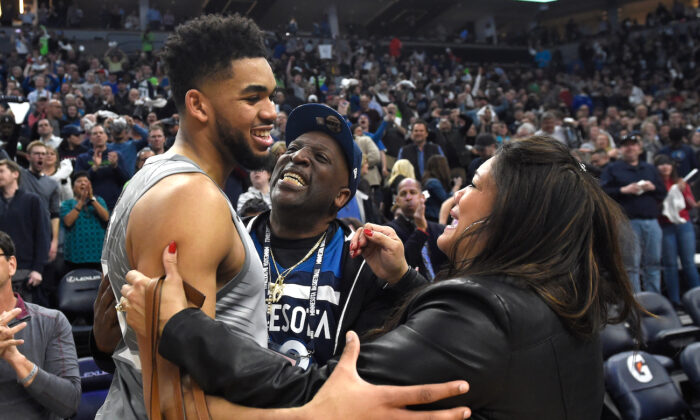 Karl-Anthony Towns of the Minnesota Timberwolves hugs his parents, Karl and Jacqueline Towns, after winning the game against the Denver Nuggets at the Target Center in Minneapolis, Minnesota, on April 11, 2018. (Hannah Foslien/Getty Images)
High-profile cases

“The Towns family is heartbroken by the untimely passing of Jacqueline Towns due complications as a result of COVID-19,” the family announced in a statement shared by the team.

“Jackie, as she was affectionately known among family and friends, had been battling the virus for more than a month when she succumbed on April 13th,” the statement read.

“Jackie was many things to many people—a wife, mother, daughter, grandmother, sister, aunt and friend. The matriarch of the Towns family, she was an incredible source of strength; a fiery, caring, and extremely loving person, who touched everyone she met.

“Her passion was palpable and her energy will never be replaced.”

“The Towns family is extremely grateful for the outpouring of love and support they have received during this very difficult time. They would like to thank the medical warriors at Penn Presbyterian Medical Center and JFK Medical Center, who fought for Jackie day in and day out, and helped Karl Sr. from the same virus that took Jackie’s life,” the family’s statement continued.

“The family is devastated by their tremendous loss, and respectfully requests privacy in this time of great mourning.”

The Timberwolves released a statement dedicated to Jacqueline Towns upon her death.

“In the four-plus years we were fortunate to know Jackie, she became part of our family. Her passion for life and for her family was palpable,” the team’s statement read. “As Karl’s number one fan, Jackie provided constant and positive energy for him and was beloved by our entire organization and staff at Target Center as she supported her son and the Timberwolves.”

NEWS: Statement from the Minnesota Timberwolves on Jacqueline Towns: pic.twitter.com/j6iSoaZvo0

The NBA player announced earlier on March 24 that his mother had been placed in a medically-induced coma.

“She’s been in a medically induced coma,” he said at the time. “Since that day, I haven’t talked to her, haven’t been able to obviously communicate with her. I’ve just been getting updates on her condition.”

On March 25, the Timberwolves confirmed to ESPN that Jacqueline was diagnosed with the CCP virus. Towns also told ESPN that his father, Karl Sr., had contracted the CCP virus but was “recovering well” while finishing his self-quarantine.

Towns told ESPN in an interview in 2017 that his mother had worked for the medical department at Rutgers University for over 20 years.

About a week before his mother tested positive for COVID-19, Towns announced that he was donating $100,000 to the Mayo Clinic to help fund testing for the CCP virus.