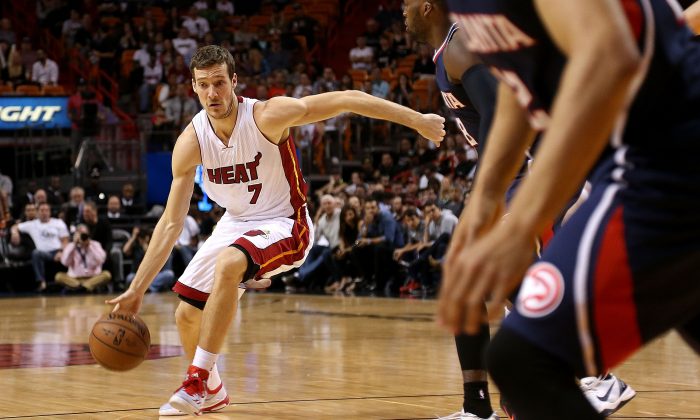 Goran Dragic #7 of the Miami Heat drives to the basket during a game against the Atlanta Hawks at American Airlines Arena on February 28, 2015 in Miami, Florida. (Photo by Mike Ehrmann/Getty Images)
NBA

It’s a new week and that means a fresh slate of NBA games to enjoy as the 2014-15 regular season nears the end.

Every game counts for different reasons. Some teams are vying just to make the playoffs; others need more wins to ensure homecourt advantage; while still others would like to finish the season strong, despite being out of the playoff battle.

With the Knicks, Lakers, 76ers, Kings, and Timberwolves all grabbing upset wins recently, the play has truly picked up league-wide.

This week features a number of exciting matchups, including Goran Dragic facing his former teammates in Miami. Check out the top games to watch below.

Game of the night: Suns vs. Heat

Dragic demanded to be traded and put the Heat as one of the few teams he would confirm ahead of time that he’d re-sign with after this season. Phoenix also dealt Isaiah Thomas and brought in Brandon Knight, drastically altering the backcourt rotation and severely regressing afterward.

However, over the past few games it looks like Eric Bledsoe is starting to step into the role of new team leader, and Knight has been getting accustomed to his new teammates. The Heat, meanwhile, are trying to fit Dragic in with Dwyane Wade, Hassan Whiteside, and the rest of the team, but lost two tough games recently by two points each.

Both teams need every win they can get as they’re battling for one of the last playoff spots in their respective conferences. And Phoenix would surely like a win against Dragic, while he would certainly enjoy a win against the Suns if only to stick it to management.

Another Good Game: Pelicans vs. Mavericks

New Orleans will try to continue its improbable run without three of its best players. Jrue Holiday has been out for weeks but the loss of both Anthony Davis and Ryan Anderson prompted many to count the Pelicans out of the West playoff race. Alas, five straight wins have put them only 0.5 games behind the Oklahoma City Thunder for the eighth spot.

Dallas stayed pat at the trade deadline, although the team previously acquired Rajon Rondo for its starting point guard position. New Orleans snagged Quincy Pondexter as a key rotation piece and later got Norris Cole, who provides defense and playmaking at backup point.

Game of the Night: Wizards vs. Bulls

Washington and Chicago do not like each other. That makes for a great game each time the two teams face off.

The Wizards shocked many by ousting the Bulls in last year’s playoffs, and the animosity has carried over into this season. The rivalry is particularly intense among the big men, with Nene and Marcin Gortat emphasizing that they believe they’re better than the Bulls big men. It’s easier this time around since Taj Gibson is injured.

Another storyline: how both teams are struggling lately and could end up right back where they were last season, at the four and five seeds. Washington’s recent string of losses included one to the lowly Sixers, while Chicago barely beat the Timberwolves and lost to the Clippers and Hornets lately.

Another Good Game: Rockets vs. Hawks

Houston and Golden State are both facing some of the best teams in the East recently, a scheduling trend that continues when the Rockets visit Atlanta on Tuesday.

James Harden has been propelling Houston to wins despite not having Dwight Howard, while Atlanta has regressed lately but has built another four-game winning streak. Houston needs the win more than Atlanta to keep pace in the tough West.

Game of the Night: Trail Blazers vs. Clippers

Los Angeles has become even more fun to watch with DeAndre Jordan’s explosion, while Portland’s addition of Arron Afflalo at the deadline boosted an already potent attack.

Jordan will likely draw the misfortune of trying to slow down LaMarcus Aldridge, but the real matchup to watch is Chris Paul against Damian Lillard.

Another Good Game: Nets vs. Hornets

Brooklyn became watchable by adding Thaddeus Young at the deadline, combined with coach Lionel Hollins adding the energetic Cory Jefferson and athletic Markel Brown to the rotation. Plus, Joe Johnson is always pretty fun to watch.

Charlotte grinds it out every game but there’s beauty in tough defense, too. The game gets better considering both teams need wins badly in the race for eighth (and seventh), so competition should be fierce.