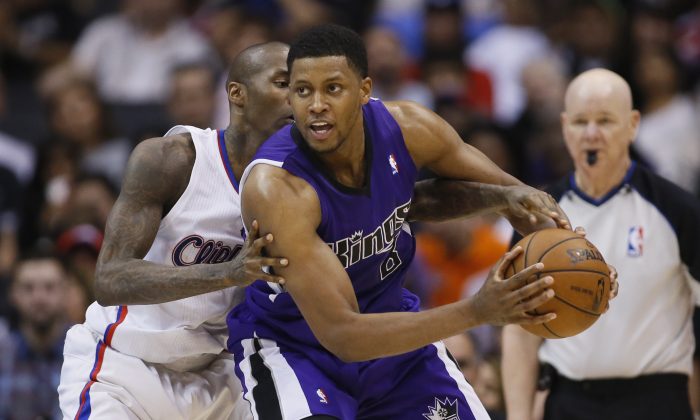 The NBA rumors and news keep coming, especially regarding LeBron James and the Cleveland Cavaliers, Team USA, the Kevin Love trade, and the schedule.

The New York Knicks are trading Wayne Ellington and Jeremy Tyler to the Kings for Travis Outlaw and Quincy Acy.

The New York Daily News broke the report on Friday.

“One of our goals was to find ways to balance the roster out from a position standpoint a little better and then also to provide us depth across all positions,” GM Steve Mills said in a cal.

Kevin Durant dropped out off the Team USA roster for the FIBA World Cup, which starts on August 30, leaving a big hole.

With no clear starting small forward, the team has brought up Rudy Gay of the Sacramento Kings onto the roster, according to multiple reports. 16 players are in contention for 12 roster spots. The final roster will be chosen by August 29, after more training and several exhibition games, including against Brazil on August 16.

Gay joins Kings teammate DeMarcus Cousins on the roster, and will likely be vying with Chandler Parsons and Gordon Hayward at the small forward position.

With Durant and Paul George gone, Team USA will also likely go smaller in most of the games, and may start James Harden at small forward with Stephen Curry and Derrick Rose in the backcourt.

Gay was part of the 2010 Team USA team, which won the FIBA World Cup.

The Philadelphia 76ers may enter the Kevin Love trade as a third team.

Yahoo reported this week that the Minnesota Timberwolves and Cavs have agreed to a trade that would send Love to Cleveland in exchange for Andrew Wiggins, Anthony Bennett, and a protected 2015 first-round pick.

The deal has to wait until August 23 because Wiggins signed his rookie contract in late July, triggering a 30-day delay due to league rules.

Some reports indicate that the Sixers may enter the fold in time for the final deal.

Jake Fischer of the Boston Globe said that the Wolves and Sixers have not stopped talking a deal for Thaddeus Young, for instance.

Some reports indicate that the Sixers want Bennett, although they already have several big men.

The official NBA schedule won’t be released until next week but the Cleveland Cavaliers and Miami Heat will reportedly play four times.

The South Florida Sun-Sentinel says that the current iteration of the schedule features four matchups between LeBron James’ new team and his old team.

A source said that the first meeting will be on Christmas in Miami at night.

The Cavaliers will also play in Miami on March 16.

The Heat are scheduled to travel to Quicken Loans Arena in Cleveland on February 11 and April 2.

The source cautioned that the current schedule remains fluid, although there generally are only subtle changes once teams are forwarded their preliminary schedules.

The Heat will also open the season at home on October 30 against the Washington Wizards in a matchup that may happen again deep in the playoffs.

The team’s first road game is currently scheduled for November 1 in Philadelphia.

Matchups with the San Antonio Spurs, whom the Heat lost to in the finals, are listed for February 6 in San Antonio and March 31 in Miami.

CLEVELAND—LeBron James will play his first preseason game with the Cavaliers at home before he faces his former team, the Miami Heat, in Brazil.

The Cavs will open their exhibition season Oct. 5 against Maccabi Tel Aviv, the Israeli club formerly led by new Cleveland coach David Blatt. It will be James’ first game with the Cavs since re-signing with them last month as a free agent.

On Oct. 12, James and the Cavs will play the Heat in Rio De Janiero. James won two NBA titles and went to the NBA Finals four straight seasons with the Heat.

The Cavs will also play in Cincinnati on Oct. 15 against Indiana and against Chicago in Columbus on Oct. 20 on Ohio State’s campus.

INDIANAPOLIS—Police arrested former NBA No. 1 draft pick Greg Oden on battery charges early Thursday, alleging that he punched his ex-girlfriend in the face during a fight.

The free agent center, who played for the Miami Heat last season, was arrested early Thursday at his mother’s suburban home in Lawrence on two preliminary counts of misdemeanor battery.

According to a Lawrence police report, officers were called to the home at around 3:30 a.m. and found a 24-year-old woman on a sofa with a swollen, bloody face. A friend of the woman told officers that Oden had “punched her in the face.”

The report says the injured woman was uncooperative and told officers she had fallen, but was unable to say when and where that occurred.

Oden told officers he and the woman had dated for about two years but split up two months ago. According to the report, he said he was arguing with his ex-girlfriend when “things got out of control” and he struck her as he swung his arms to try to break free of two people who were trying to hold him back.

One of Oden’s relatives, who said she was awoken by the argument, told police that “every time the two visit and go out, there is an argument to follow.”

Oden’s agent, Michael Conley Sr., directed all questions to Oden’s attorney, James Bell. In a statement, Bell said: “It would be inappropriate to comment at such an early stage of this case. The court will schedule a hearing and we will allow that process to play out.”

The 7-foot Oden was a star at Lawrence North High School in Indianapolis and then played a season at Ohio State before the Portland Trail Blazers made him the top pick in the 2007 NBA draft.

Knee injuries have derailed Oden’s professional career, and he didn’t play from December 2009 until last season, when he averaged 2.9 points in 23 games for the Heat. He is currently without a team.