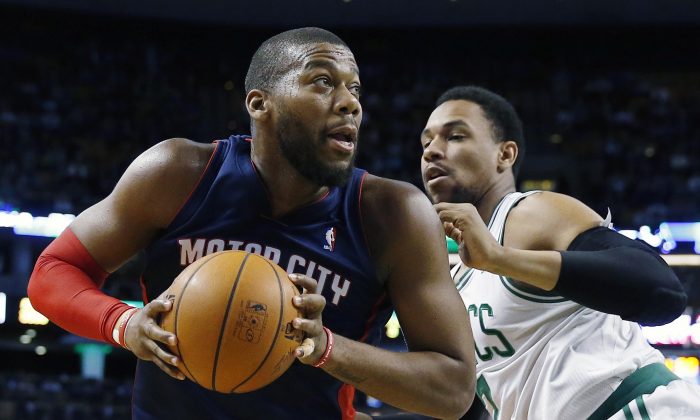 The NBA rumors keep flying as signings and trade talks are still happening.

Lots of rumors are going around about Durant following LeBron James example and returning to Washington D.C. when he becomes a free agent in 2016.

“I’m going to do what is best for me,” Durant told reporters at the Team USA basketball camp. “It’s hard to talk about that right now. I have two years left with Oklahoma City. I’m just focusing on that. I’m not going to make a decision based on what somebody else does.”

“To be with one of the top two best players in the league, in my opinion, who can score at will and do whatever he wants (would be great),” Wall said. “You could have a Big Three with me, him and Brad (Beal), and I feel like that’s what you need to win a championship now is a Big Three. It’d be great to have him back home.”

Detroit Pistons big man Greg Monroe has found himself without serious suitors, leaving him in limbo for now.

Monroe doesn’t want to re-sign with the Pistons for a long deal. He wants to sign a short-term deal so he can hit the unrestricted market soon, reported Basketball Insiders.

There’s been some sign-and-trade proposals but they haven’t really gotten anywhere.

Not Much Interest in Bledsoe

The restricted free agent may have to re-sign with the Phoenix Suns, even if just for a year, per Basketball Insiders.

The few teams that could have the space to offer him bigger deals–the Philadelphia 76ers and Milwaukee Bucks–don’t seem very interested.

Chris Haynes of Comcast Sportsnet added that there’s been an “ominous development,” according to sources, and the two sides remain “very far apart” in contract negotiations. It has even escalated to the point where the “relationship is on the express lane to being ruined,” a source with knowledge of the situation said.

Scott played well for the Atlanta Hawks last year but hasn’t been re-signed as of yet. He averaged 9.6 points and 3.6 points and played especially strong during the playoffs.

Now Adrian Wojnarowski of Yahoo reports that while Scott would prefer to play in the NBA, he may depart elsewhere.

The 6’10” forward provided a presence in the paint, and gained support from Kings center DeMarcus Cousins.

Several other teams had interest in Moreland, who played at Oregon State University.

The Dallas Mavericks have signed forward Ivan Johnson after he started all five games for their summer league team.

Johnson averaged 7.8 points and 3.8 rebounds in the Las Vegas league. The contract was announced on Tuesday.

The 6-foot-8 Johnson played last season with Zhejiang Chouzhou in China. He averaged 26 points and 9.9 rebounds in 24 games.

Johnson played 125 games over two seasons with Atlanta ending in 2013. He has career averages of 6.5 points and 3.9 rebounds.

The 30-year-old Johnson started his pro career in the NBA Development League with Rio Grande Valley and Anaheim.

Grizzlies controlling owner Robert Pera has removed the interim tag and named Chris Wallace as Memphis’ general manager, signing him to a multi-year contract keeping him with the franchise.

Pera announced the deal Tuesday but did not disclose any terms. Wallace had been serving as interim general manager since a front office shake-up May 19.

“Chris has been at the forefront and a stable presence throughout some of the Grizzlies’ greatest successes,” Pera said in a statement. “His strong bonds and experience, not only within the organization and NBA but also within the Memphis and Mid-South communities, make him the ideal fit to lead our basketball operations. We believe Chris’ skills and expertise to be vital in our continued success of our franchise.”

Wallace originally was hired as general manager and vice president of basketball operations in June 2007, and he put together the core that has gone to a team-record four straight playoff berths and reached the Grizzlies’ first Western Conference final in 2013. He drafted Mike Conley, brought in Zach Randolph who has been a two-time All Star in Memphis, traded for Marc Gasol and signed Tony Allen as a free agent.

As the interim general manager, Wallace helped since Vince Carter as a free agent earlier this month and oversaw the June draft that brought in Jordan Adams and Jarnell Stokes.

“Robert Pera is strongly committed to the success of the Grizzlies, and I am excited to continue working in tandem with Robert, our front office and our coaching staff in helping realize his vision for the franchise,” Wallace said.

Memphis is the seventh NBA franchise Wallace has worked with in his career. He spent 10 seasons as general manager of the Boston Celtics, was director of player personnel in the last of his four seasons with Miami and also has worked for the Knicks, Clippers, Nuggets and Trail Blazers.

The Grizzlies later announced that Ed Stefanski also is joining the team as executive vice president of player personnel. Wallace said on radio that Stefanski, a former general manager of the Philadelphia 76ers whose last job was with Toronto, will be based in Philadelphia where he has a home.