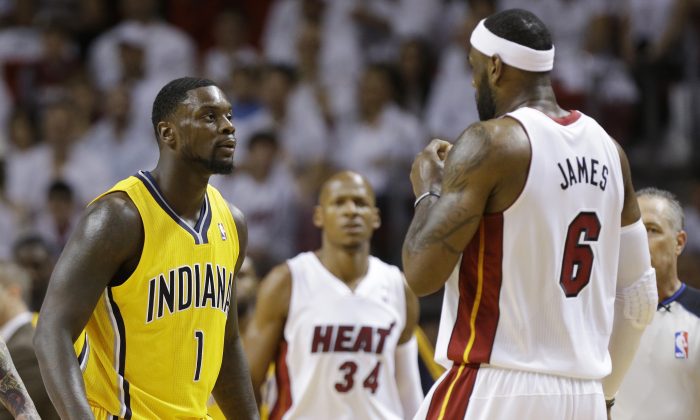 CHARLOTTE, N.C. (AP) — Lance Stephenson doesn’t want to be known as the guy who blew in LeBron James’ ear.

Stephenson said during his introductory news conference Friday in Charlotte he’s “a little upset” that the ear-blowing incident in Game 5 of the Eastern Conference finals against Miami is how some people have defined him as a player.

“I feel like it overshadowed my play on the court,” Stephenson said. “I bring more to the table than just blowing in someone’s ear. I’m a great player.”

Hornets general manager Rich Cho agrees, which is why the club signed Stephenson to a three-year, $27 million contract Friday. The deal includes a team option for the third season.

Cho says the 23-year-old Stephenson brings competitiveness, scoring ability, a defensive presence and a wealth of playoff experience — all things the Hornets need to take the next step and become a perennial playoff contender.

The Hornets, who ranked near the bottom of the NBA in 3-point field goal percentage last season, expect Stephenson will help them in that area. Stephenson shot 35 percent from beyond the arc last season. He also proved versatile in other ways.

Napier’s deal got finalized Friday, hours before Miami’s final game of its summer league schedule. The point guard will make about $1.2 million this season after being selected with the No. 24 overall pick in last month’s draft.

Obviously, it was never a question that Napier was going to get a deal, but he said actually signing the contract was a significant moment. He’ll return to Miami on Saturday to begin getting ready for training camp that starts in about two months.

“Growing up, this is what you want to do,” said Napier, who sat out the summer finale against Cleveland. “You want to be part of a great organization. It’s always great to have that extra feeling of relief. I told my family about it and it’s something we all will cherish.”

Wizards get C Blair in deal with Dallas

WASHINGTON (AP) — The Washington Wizards have acquired center DeJuan Blair in a sign-and-trade deal with the Dallas Mavericks.

The 6-foot-7 Blair averaged 6.4 points and 4.7 rebounds in 78 games in his only season with Dallas. He spent his first four seasons with San Antonio and has career averages of 7.5 points and 5.6 rebounds.

Dallas obtained the rights to Emir Preldzic in Tuesday’s trade. The 6-9 Preldzic was selected by Phoenix with the 57th overall pick in the 2009 draft.