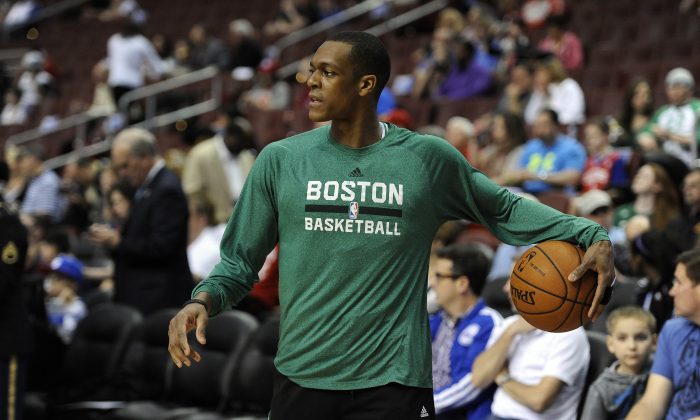 Rajon Rondo, in a file photo, reportedly said that he "wants out" and could be traded. (AP Photo/Michael Perez)
US

The NBA rumors and news keep coming, with Rajon Rondo the most prominent player the subject of trade rumors.

Rajon Rondo ‘Wants Out’ of Boston

Star point guard Rajon Rondo apparently “wants out” of Boston, according to the latest report on him.

The Celtics and Rondo have said publicly that the fit still works, but during a behind-the-scenes clip of ESPN’s Around the Horn, which the show posted Wednesday on YouTube, the Jackie MacMullan suggested Rondo has already made it clear he will not stay after his contract expires next summer.

And there’s been rumors about him going to the Knicks.

Frank Isola mentioned possible trades for Rondo, prompting MacMullan to say: “Oh, I hope so. Just get it done. And it will happen because he’s told them he wants out. And no one believes me, but that’s the truth.”

MacMullan doesn’t see great possibilities for the Celtics to get much in return.

Spurs Jump in Race to Try to Snag Allen

Ray Allen is still one of the best sharpshooters in the league and is highly sought after this offseason.

The free agent might retire but if not he has multiple teams to choose from, including the Cleveland Cavaliers.

“Clippers in the mix as well. Dallas has also pursued Ray Allen this summer. LeBron’s Cavs, of course, still badly want the sharpshooter, too,” he noted.

“Ray Allen himself, mind you, has been saying for weeks that he’s still deciding whether or not to play next season, let alone choose where.”

Allen told ESPN’s Brian Windhorst after the NBA finals loss earlier this year that retirement is a definite possibility.

“I’ve had a great career, I’m content with what I’ve done,” Allen said. “It’s hard to think past this moment. In the next couple of days I’ll think about it and see where my true heart lies.”

The Miami Heat are looking to add another veteran backup center and met with 34-year-old Nazr Mohammed.

The meeting included a workout and a discussion with team executives, reported the Miami Herald.

Mohammed, who has career averages of 5.9 points and 4.8 rebounds, played in 80 games for the Bulls last season.

The Heat want to sign Emeka Okafor, but he’s reportedly going to wait to sign with a team until midseason after he’s fully recovered from his injury. The Heat have also inquired about Andray Blatche, who played for the Brooklyn nets last season and is currently playing for the Philippines national team.

Ian Mahinmi, the Indiana Pacers backup center, suffered an injury while playing for the French national team in the FIBA World Cup.

A team doctor said he’ll be out for two to three months.

“The injury prevents me from playing. The shoulder is dislocated, is resocketed … The risks are high. My health is better to stop.”

He added that it’s an old injury. “The injury was incurred before the playoffs. But it did not stop me from playing. I have not missed a practice or a game.”

The Dragic brothers are continuing to lead Slovenia to wins in FIBA play.

Goran plays for the NBA’s Phoenix Suns while Zoran, the younger brother, currently plays in Europe.

Zoran was a perfect 6-6 with 22 points in the win on Sunday over Mexico.

Goran was perfect from 2-point range (6-6) and 1-2 from three-point range with 18 points and six assists.

There’s been talk before about NBA teams eyeing Zoran, but that might turn into the guard finally getting to the NBA after this tournament is over.

MINNEAPOLIS—The Minnesota Timberwolves haven’t made the playoffs in 10 years and just traded the face of their franchise so he can go chase a championship with LeBron James in Cleveland.

Kevin Love is gone now, and yet somehow the Timberwolves have parlayed that into a record-setting week at the box office.

After completing the long-rumored trade that sent Love to the Cavaliers and brought Andrew Wiggins, Anthony Bennett and Thaddeus Young to Minnesota, the Timberwolves have sold more than 300 full season-ticket packages in the last week.

That beats the previous record in 2011 that was set when Ricky Rubio announced that he was coming over from Spain to play for the team.

“The organization, from president-level on down has just been re-energized,” Timberwolves senior vice president and chief revenue officer Ryan Tanke said. “Part of it is hope, and you have this great new hope.

“But then there’s also the reality, which is it was a long, tough summer. For it to come to the head that it came to and have it be the outcome that we had, I think it creates this perfect storm environment for us.”

The front office and players weren’t the only ones stuck in limbo this summer because of an NBA rule that prevented the blockbuster trade from being consummated until 30 days after Wiggins signed his contract.

The Timberwolves’ sales staff had to sit on its collective hands and wait for the official announcement to come before reaching out to fans to beef up a season-ticket base that dropped from 7,400 for the 2013-14 season to fewer than 6,000 this summer.

Sales representatives were barred from discussing the trade with inquiring fans and the team certainly could not advertise the wholesale changes that were coming.

“I’d be lying if I said it wasn’t a really challenging summer for our sales staff,” Tanke said. “When you don’t have the story to tell, you have to go to painstaking lengths to make sure they don’t tell a story and stay off of rumors. We’re unable to talk about that stuff so your challenge is compounded when you can’t even talk about it.”

As last Saturday — the first day that Wiggins was allowed to be traded — got closer and closer, more reports started to come out that the deal was going to happen.

Still unable to confirm anything officially, the Wolves still did start to see some momentum build. They sold 200 full season-ticket packages in the three weeks leading up to the announcement, with fans growing more and more confident that the deal was a matter of when, not if.

And when the announcement finally did come down, well, the staff Wigged out. An army of 50 sales representatives wore brightly colored wigs to the office on Saturday morning to celebrate, and they started hitting the phones.

The players were unveiled at the Minnesota State Fair on Tuesday, drawing large crowds wherever they went. The Wolves also set a new five-day record with 500,000 page views and 200,000 visitors to timberwolves.com.

“I can’t hardly get 20 steps without someone stopping me and saying, ‘Hey Mr. Taylor, we’re really excited about your team,'” owner Glen Taylor said at the fair. “So I see the enthusiasm among our fans to watch these players. Now, maybe it will be a dunk contest here for a while, but, we certainly have some athletic young men.”

And even though the second-best player in franchise history was departing, the deal has been met warmly by fans thanks to the promise of Wiggins, a sensation since his high school days who spent one season at Kansas.

Bennett was the No. 1 overall pick in 2013 and Young is a well-regarded veteran forward that has given some the impression that this isn’t just the latest in a long line of restarts that have come since Kevin Garnett was traded in 2007.

“We’ve been talking about it this week. Why does this feel so much different?” Tanke said. “You hope another deal works out or a trade for Kevin Garnett, you hope it works out. For this one, for whatever reason, both internally and externally with the sentiment of the fans, everybody truly believes this one is going to work out.”

BILBAO, Spain—The Basketball World Cup started Saturday with a record 45 current NBAplayers on the rosters of the 24 teams.

There were 75 players in the tournament who have played in the NBA, along with 17 more who have been drafted and whose rights are owned by NBA teams.

All 12 players on the U.S. roster are on NBA teams. Host Spain is next with six current NBA players.

Only three teams in the tournament have no players who have either played or been drafted byNBA clubs. Cleveland and Houston both have a league-high four players in the field.

The previous record was 44 active NBA players in the 2010 tournament.

The team made the move on Friday after having traded forward Jared Dudley and a protected 2017 first-round draft pick to Milwaukee for Delfino and Raduljica.