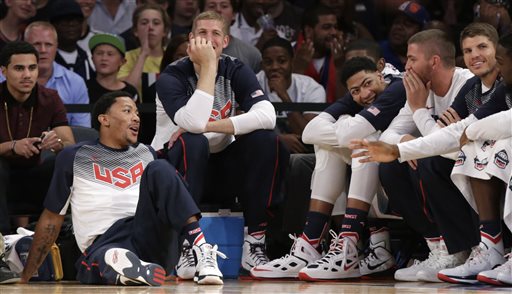 The NBA rumors and news keep flying, particularly about potential trades and the Team USA. U.S. guard Derrick Rose, left, sits on the floor, next to forward Mason Plumlee and other teammates sitting on the bench during the second half of an exhibition basketball game at Madison Square Garden in New York, Wednesday, Aug. 20, 2014. Rose didn't play as the United States defeated the Dominican Republic 105-62. (AP Photo/Kathy Willens)
US

The NBA rumors and news keep flying, particularly about potential trades and the Team USA.

Derrick Rose Injury Serious or Not?

The injury that prevented Derrick Rose from playing in Team USA’s exhibition on Wednesday night is not considered serious and won’t keep him out of Friday’s game against Puerto Rico, team coaches are insisting.

Fans of the Chicago Bulls have grown increasingly worried about Rose’s participation with the national team as he tries to come back from two injury-ridden seasons, including a surgery on his knee.

Rose said that he’s trying to take the return slowly and accepted the decision to rest him.

“Just trying to protect myself, just knowing that this is a long, long schedule and this is the most basketball I’ll be playing in two years,” Rose said.

“I want to be out there, but at the same time my health is the No. 1 issue right now.”

“He’s feeling a lot better, he was probably feeling good enough to play tonight, but because he hasn’t played and he’s trying to shake off some rust, the best thing to do was to give him the day off,” added Bulls coach and USA assistant Tom Thibodeau.

“We went in with the idea that, as long as he’s feeling good, he’s gonna play [for Team USA],” Thibodeau added, reported ESPN. “He’s gotta play at some point. He’s basically been out for three years, so he’s gotta play, and I think this is a great setting for him — as I’ve mentioned many times — because of the depth of the team.”

The problem was described as “general soreness” by Thibodeau.

It’s been good for him. This is why I thought it would be a good way for him to come back. He had a good week in Vegas, then we had practices in Chicago. It was a good build-up. And now we’re giving him a chance to recover and then we’ll go from there. He’s feeling a lot better,” he said.

“He was probably feeling good enough to play tonight, but we thought because he hasn’t played and he’s still trying to shake off some rust, that the best thing to do would be to give him another day of rest.”

The Americans leave Saturday for Spain, where they will finish their preparations with a final exhibition against Slovenia. The World Cup opens on Aug. 30.

The Phoenix Suns may be trying to trade guard Eric Bledsoe.

Local sportscaster Jude LaCava said on Fox Sports radio that the Suns have shifted gears and are trying to trade Bledsoe.

“I do believe in my NBA sources. You can take this to the bank, so to speak, the Suns are now discussing trade possibilities for Eric Bledsoe,” he said.

“That’s the new chapter to this and I wouldn’t back off of that information. I think it’s 100% correct.”

“It’s to the point that if they can accommodate Bledsoe and get something they want in return, trade possibilities are very, very real and they have been discussed,” he added.

Bledsoe, a restricted free agent, is one of the top free agents left on the market and easily the best guard left.

Another trade being talked about is between the New York Knicks and Philadelphia 76ers.

Reports indicated earlier this offseason that the teams were in discussions for a trade that would include Amare Stoudemire.

While the trade doesn’t appear to make a lot of sense at first glance, Steve Kyler of Basketball Insiders says that there’s a good reason the Sixers should make the deal–the NBA salary floor, which is what NBA teams are required to meet by the end of the season.

“What’s far more likely is that the long rumored Amar’e Stoudemire to Philadelphia deal gets done at the deadline. The Sixers take on Stoudemire’s $23 million salary cap number, which pushes them way over the minimum. They would only owe him roughly 30 percent of his remaining contract, so they’d end up paying him $7 million in cash and likely extract a draft pick or a rookie scale player for their troubles,” Kyler said.

“Flexibility in the NBA is currency – both figuratively and literally. The 76ers will likely meet the floor; they just are not incentivized in any way to do it before the trade deadline.”

The Miami Heat have been working out a number of players, looking for a shooting guard and a big man.

The team recently worked out Jordan Hamilton before he signed with the Raptors, as well as Chris-Douglas Roberts.

The Heat have also inquired about Leandro Barbosa and Jordan Crawford.

As for the big man, the team has shown interest in Emeka Okafor and considered Ekpe Udoh, according to the Miami Herald.

Other players on the radar include Andray Blatche, Jason Maxiell, and Elton Brand.

Rajon Rondo, the best Boston Celtics player, was reportedly part of a deal that the Celtics and Sacramento Kings were discussing.

But sources close to the process in both teams told Basketball Insiders that they’re adamantly denying that a Rondo deal is being discussed.

Rondo will be an unrestricted free agent next summer, and his name has been included in many trade rumors.

Police say 18- and 19-year-olds were attending a party next door when they entered throughout the front door of the unlocked Coral Gables home last week. Shannon Allen said she woke up and heard male voices with large flashlights loudly discussing their personal property. The terrified mother screamed, the intruders ran and she called police, according to a statement from the couple.

The group told police they thought the Allens had moved and wanted to see how a professional basketball player lives. Police initially released the teens because there was no forced entry, no intent and nothing was taken. At the time, the Allens’ attorney said the couple was upset that charges weren’t filed because a crime had been committed that left the family feeling scared and vulnerable.

Shannon Allen gave sworn testimony to the state prosecutors to support the filing of charges, her attorney Gregory Victor said. The couple could have declined to press charges.

He said the Allens did not have a position on what specific charges should be filed, saying that decision was left to state prosecutors. If convicted, the seven could each face up to a year in prison for the first-degree misdemeanor trespassing charge. Victor said none lived in the Allens’ neighborhood and the couple did not know them.

“Nobody’s upset with the police and we’re satisfied that charges have been filed and there will be consequences for the actions,” Victor said.

In a team release, the Grizzlies announced they would be training from Sept. 30 to Oct. 3.

This is the first time the Grizzlies have conducted their training camp in San Diego. Since the franchise moved from Vancouver to Memphis in 2001, the Grizzlies have held camp in Memphis nine times and also have traveled to Nashville (2013), Birmingham, Alabama (2009) plus Malaga, Spain (2007), and Barcelona (2003) as part of the NBA Europe Live Tour.

The Grizzlies went 50-32 last year and made their fourth straight playoff appearance, losing in seven games to Oklahoma City in the first round.

The 6-foot-9 forward played last season for Trabzonspor in the Turkish Basketball League, averaging 12.6 points and 6.9 rebounds in 28 games.

Cooley was undrafted after four years at Notre Dame, where he averaged 13.1 points and 10.1 rebounds in the 2012-13 season as a senior. He finished his career with 1,017 points, 792 rebounds and 32 double-doubles for the Fighting Irish.

Blatt will have Drew, Jim Boylan, Bret Brielmaier and James Posey on the bench with him along with Tyronn Lue, named an associate head coach in June.

Drew went 15-67 in his only season in Milwaukee. He was expected to get a second year but was fired so the Bucks could hire Jason Kidd. A former NBA player, Drew also coached Atlanta.

A long-time NBA assistant, Boylan is back for his second season with Cleveland as is Brielmaier.