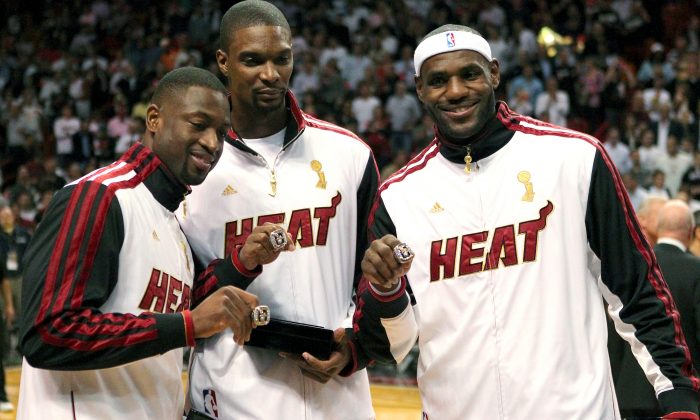 LeBron James and Dwayne Wade reportedly had dinner last night before going out to a night club.

He told his followers via Twitter that it was “great” having James and Wade at his establishments.

James is currently trying to decide whether to return to the Heat after opting out of his contract.

Wade and fellow star Chris Bosh also opted out of theirs. Bosh and James are considered fairly likely to leave but many believe that Wade will stay even if the other two leave.

Talk is heating up for both James and Bosh, though neither have made any statements publicly lately. Bosh is reportedly strongly considering a big offer from the Houston Rockets while the Cleveland Cavaliers have a “serious chance to convince James to return home,” reported the Cleveland Plain Dealer.

James reportedly wants a maximum contract of $22 million a year, which would eliminate other options such as the Chicago Bulls and Dallas Mavericks.

The Dealer points out that the Cavs can give James the deal and also that James still enjoys northeast Ohio. And the Cavs just snagged Andrew Wiggins with the top pick in the draft and also have Kyrie Irving, among other players.

Then again, a source told Sam Amico of Fox Sports that “he thinks LeBron James is leaning toward Heat.”

Over on Cleveland.com, a commentor believes that Heat fans would be fine with James and Bosh leaving.

“I have a bunch of customers in Broward and Dade Counties. Four are Heat season ticket holders, since the beginning. In all of this, their allegiance starts and ends with Wade. If Lebron leaves, they are OK with Wade ‘opting back in’ and taking the $42 million over 2 years. Understanding he will only play 50 games. Understanding that if LeBron goes, Bosh probably follows. Understanding that paying Wade this much will set the franchise back 5 years,” he said.

“They truly believes he is OWED a lifetime achievement contract with the Heat. Three titles and his health. With both Lebron and Bosh leaving, it will give them lots of cap space to retool after the next CBA in 2 years. So all in all either way their fan base will be fine. Either way it will be interesting, and good for business for the NBA.”