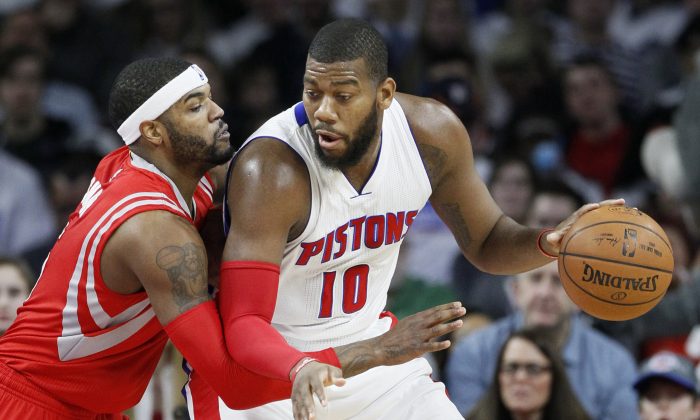 NBA Rumors: 2015 Free Agents Who Will Actually be Available

A number of NBA teams are already looking forward to the draft and free agency, as well as fans of those teams. While many free agents have been linked to certain teams, the truth is a fair number of the top free agents will almost certainly stay with the teams they’re on now.

LeBron James, Marc Gasol, and Kawhi Leonard are among the players expected to stay with their current teams. Other players who would be huge targets if they left, but most likely won’t, include DeAndre Jordan, Tim Duncan, and Tyson Chandler.

On the other side, though, there are some players who are currently thought more likely than not to hit free agency and end up with a different team.

Check out the top players in this category below.

The Pistons have two big free agents—Monroe and Reggie Jackson. As of right now, Jackson will likely be back but Monroe will not. Monroe took a qualifying offer this past offseason just so he can be an unrestricted free agent this offseason. Plus, in Stan Van Gundy’s system he doesn’t get as many touches as he could in other places.

Steve Kyler of Basketball Insiders said that Monroe is willing to meet with Los Angeles this summer, while Boston’s second target behind Kevin Love will be Monroe. Despite playing fewer minutes this season, 30.8, Monroe is averaging 15.7 points on 49 percent shooting as well as 10.5 rebounds.

Butler is going to get a big offer sheet from some team, whether it’s the Knicks or another team. And Chicago may not match it. Butler hasn’t voiced displeasure with the team, but has been at the top of the league in terms of minutes played over the past several seasons, which probably hasn’t been the best plan.

A number of teams will look very hard at Butler, who is known for his defense but has been producing on the other end this season as well. Butler is averaging 20.2 points in 38.9 minutes a game this season, shooting 46 percent from the field and 35 percent from long range.

Harris could very well stay in Orlando, especially because the Magic have the right to match any offers since he’s a restricted free agent. But the 22-year-old small forward will likely get a big offer sheet, likely from the Knicks, and the Magic could opt to go a different direction.

Harris will probably not get a max deal but it should be significantly more than the $2.5 million he’s set to earn this season, also the final of his rookie contract.

Atlanta, Detroit, and Philadelphia are other potential landing spots for Harris, whose stock has increased significantly this season due to his bigger production, and much better 3-point touch (37 percent this season versus 25 percent last season).

Unless the Mavericks make a deep playoff run with improved play from the current roster, Rondo could very well be seeking a new home this summer, especially with the Mavs looking to re-sign Monta Ellis and Tyson Chandler.

Dallas executed a deal to bring Rondo in midseason, but things have not worked out as expected so fa—the latest sign of trouble being Rondo shouting at coach Rick Carlisle.

Rondo, 29, will reportedly be seeking a max contract as an unrestricted free agent, but analysts are having trouble pinpointing a team that would give him that kind of money. Rondo is slated to make $12.9 million in 2014−2015.

The Hawks don’t need upgrades in very many places, but small forward might be one of them. “The Hawks have had eyes on an elite small forward type and there is a sense that Carroll might be out in July for economic reasons, meaning the Hawks may have his cap hold out of the way and maybe $15 million in space to play with,” Kyler said.

Carroll, a lockdown defender, doesn’t need many shots as a starter but can still play his role as a glue guy. He’s making $2.5 million this season.

Despite his success in Atlanta, the 28-year-old could serve in a bench role for a team deeper at the wing. He fulfills the 3-and-D requirement since he has a clean 36 career percentage from long range, including 40 percent this season.