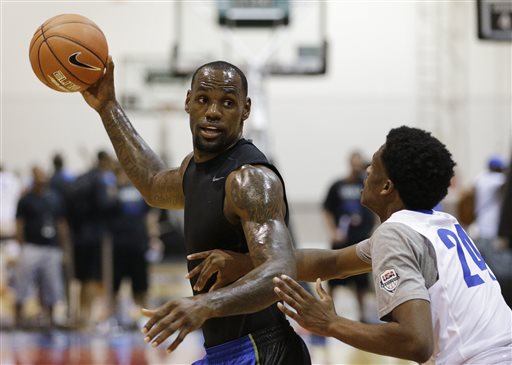 NBA free agency opened and already a number of deals have been announced.

However, the big stars–LeBron James, Carmelo Anthony, Chris Bosh, and Pau Gasol–have not announced their intentions yet.

It appears that the latter two are waiting for the former two.

James is reportedly trying to decide between returning to the Cleveland Cavaliers or Miami Heat, while Anthony is deciding between the New York Knicks, Los Angeles Lakers, and Chicago Bulls.

Bosh is believed to be up to return to the Heat if James does but will depart for the Houston Rockets if he doesn’t.

Gasol is deciding between the Lakers, Knicks, Heat, Bulls, San Antonio Spurs, and Oklahoma City Thunder. Knicks president Phil Jackson said on Thursday that he hopes to woo Gasol even if Anthony doesn’t return while Gasol met with Lakers officials on Wednesday night.

The Rockets and Dallas Mavericks, two teams in contention for James and/or Anthony initially, have appeared to drop back to pursue Bosh and other players.

The Mavericks signed Rockets restricted free agent Chandler Parsons to a three-year, $46 million. The Rockets are considering matching the offer but may instead turn to other small forward options such as Luol Deng, Trevor Ariza, and Paul Pierce, with whom they’ve already spoken.

See the latest hits below:

Phil Jackson hasn’t heard from Anthony as of 4 p.m. EDT but told Al Innazzone of Newsday that he expects to hear from him sometime today.

“Phil says he’s texted Carmelo since their meeting, but hasn’t gotten responses back from him,” the Wall Street Journal added.

Reports of James announcing his decision at 3:30 p.m. turned out to be false and the Cavaliers haven’t been informed of a decision, reported Sam Amick of USA Today.

Chris Mannix of Sports Illustrated added that the Miami Heat haven’t been informed of a decision either.

There are conflicting reports about the latest on Bosh’s situation.

While most agree that Bosh is still waiting for James to decide, ESPN reported that Bosh will definitely sign with the Rockets if James doesn’t return to the Heat. But NBA.com called that report false.

Pierce is one of the strongest options at small forward after James and Anthony and was contacted by former coach and current Los Angeles Clippers coach on Thursday.

Pierce is considering going to the Clippers but is also fielding offers from other teams, and could return to the Brooklyn Nets.

The deal signed Thursday would pay the small forward $63 million over the next four years. The Jazz have until 11:59 p.m. Sunday to match the offer and retain Hayward.

Marcin Gortat has signed his five-year, $60 million contract to remain with the Washington Wizards.

The Wizards announced Thursday that the Polish center had signed the deal on the first day permitted under NBA free agency rules.

The Toronto Raptors have re-signed Kyle Lowry to a multiyear contract.

The deal was agreed to last week but couldn’t be made official until Thursday, when the NBA’s moratorium on free-agent signings ended. Terms weren’t disclosed, but Yahoo Sports had reported it was for $48 million over four years.

Steve Blake is coming back to the Trail Blazers. A source said that a contract was signed that is worth a reported $4.2 million with a player option for the second year.

Blake has had two previous stints with the Blazers, most recently from 2007-09, becoming a fan favorite before going on to play for the Lakers, Clippers and Golden State Warriors.

The deal with the burly 7-footer was first reported on July 3, but it could not be formally announced by the team until Thursday per NBA rules. The contract is worth a reported $9.8 million.

The Cavs and Boston Celtics confirmed the deal on Thursday when the NBA moratorium on signings ended.

Cleveland sent guard Jarrett Jack and swingman Sergey Karasev to Brooklyn and center Tyler Zeller and a first-round draft pick to Boston. Cleveland acquired a future conditional second-round pick from the Celtics and the draft rights to forwards Ilkan Karaman and Edin Bavcic from the Nets. The Celtics will get guard Marcus Thornton — and his expiring $8 million contract — from the Nets.

The deal, first reported on Wednesday, is designed to give the Cavs enough room under the salary cap to offer James, the four-time league MVP, a maximum contract ($20.7 million).

The Jazz also received the rights to New York’s second-round draft pick in 2017 as part of the deal, which was struck last Friday but formally announced by Utah on Thursday per league rules.