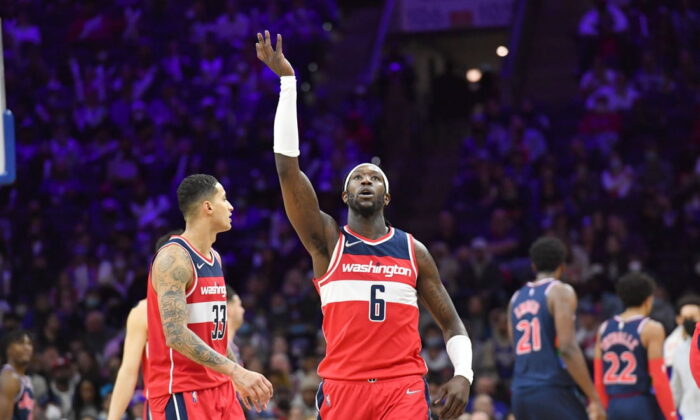 Washington Wizards Montrezl Harrell (6) blows a kiss to the crowd after making a basket against the Philadelphia 76ers late in the fourth quarter at Wells Fargo Center in Philadelphia on Feb. 2, 2022. (Eric Hartline/USA TODAY Sports via Field Level Media)
NBA

Harrell’s clutch runner in the lane with 52.5 seconds remaining gave the Wizards a 102–98 lead. After the 76ers trimmed the margin to a single point, Dinwiddie hit two free throws in the final second to seal it.

Franz Wagner’s three-point play with 1:17 remaining put Orlando ahead for good as the Magic posted their largest comeback of the season, overcoming a 17-point, second-half deficit to win at Indianapolis.

Gary Harris’ sixth trey of the game tied the score at 108 with 1:51 remaining, part of an 11–0 Orlando run. Wagner’s three-point play made it 113–110, and the Magic stayed ahead as Cole Anthony sank four free throws inside the final 10.9 seconds.

Harris finished with a team-high 22 points off the bench. Indiana got 26 points from Caris LeVert, 24 points and 16 rebounds from Terry Taylor (both career highs) and 22 from Torrey Craig.

Russell Westbrook amassed nine points, 13 assists and 10 rebounds as the Lakers won after going 2–4 on their just-concluded road trip.

Norman Powell scored 30 points and Anfernee Simons added 19 as the Trail Blazers lost their third consecutive game and fell for the fifth time in six contests.

Josh Richardson scored 23 points off the bench to propel host Boston past Charlotte. The Celtics moved three games above the .500 mark for the first time this season following their third straight win and fifth in the past six. The loss was Charlotte’s second straight.

Christian Wood scored 21 points and Kevin Porter Jr. added a late 3-pointer plus an alley-oop against his former team as Houston snapped an 11-game home losing skid with a win over Cleveland.

With the Rockets’ lead have been cut to three, Wood sank a 10-footer and a 3-pointer to key a 10–2 closing run. Porter, who totaled 16 points and seven assists, helped seal the Rockets’ first home win since Dec. 8.

Houston rookie Jalen Green, picked second overall in the 2021 NBA Draft and one spot ahead of Cleveland’s Evan Mobley, tallied 21 points, five rebounds, and five assists to emerge from a slump. Mobley paced the Cavaliers with a career-high 29 points.

The Grizzlies won for the 17th time in 21 games on a night when Morant’s shot was not consistently falling. Morant shot 9 of 27 from the field and missed 12 straight shots at one point but hit two clutch baskets down the stretch.

Jaren Jackson Jr. led Memphis with 26 points and added 10 rebounds while rookie Ziaire Williams added a career-best 21. Evan Fournier hit eight 3-pointers and led all scorers with 30 points, but the Knicks lost for the seventh time in nine games.

Luguentz Dort scored 14 of his 30 points in overtime to lift visiting Oklahoma City to a win over Dallas.

Rookie Tre Mann added a season-high 29 points for the Thunder, who have won back-to-back games for the first time since late December. Dort took over in the extra period, scoring 14 consecutive Oklahoma City points to help the Thunder overcome a big night by Luka Doncic, who logged 40 points and 10 assists.

The Mavericks also got 23 points from Reggie Bullock and 20 from Jalen Brunson.

Buddy Hield and Tyrese Haliburton combined for the first nine points of the fourth quarter, allowing Sacramento to overtake visiting Brooklyn en route to a victory in a duel of two teams on losing streaks.

Harrison Barnes had a team-high 19 points, while Hield and Davion Mitchell chipped in 18 apiece for the Kings, who snapped a seven-game skid. Sacramento was playing at home for the first time since getting swept on a five-game Eastern trip.

Nic Claxton paced the Nets, losers of six straight, with 23 points and 11 rebounds. Kyrie Irving and James Harden combined to shoot 7–for–26 and totaled just 18 points.

Six Jazz players scored in double figures as they held off a Nuggets team that shot 53.2 percent on the second night of a back-to-back set. Mike Conley scored 17 points with five assists and four steals as Utah won for just the third time in 14 games.

Bryn Forbes came off the bench to lead the Nuggets with 26 points.