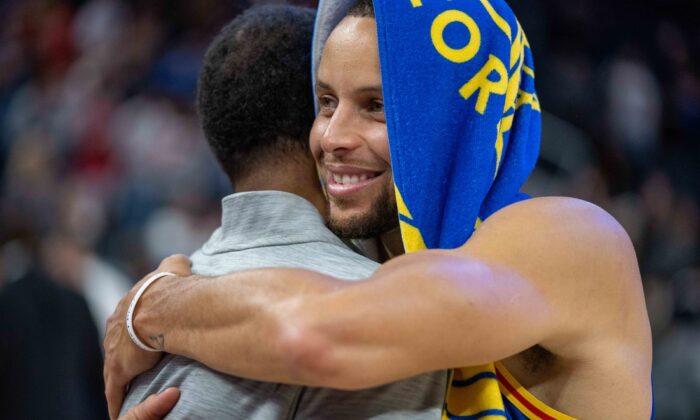 Jordan Poole had a game-high 25 points and Stephen Curry 20 as the Golden State Warriors gradually pulled away from the visiting Houston Rockets in the second half for a 120–107 victory Sunday night.

Jae’Sean Tate finished with 21 points and 10 rebounds for the Rockets, who fell for the second time in two days and have lost eight straight games.

After putting up 69 points in the first half, the Warriors led just 83–80 after a Christian Wood dunk with 5:06 remaining in the third quarter. But Nemanja Bjelica nailed a pair of 3-pointers and Payton chipped in with two hoops during a 15–0 flurry that broke the game open.

It was Durant’s 10th straight game with 20 or more points as the Nets won their fifth in a row, including the first two of a six-game road trip.

Beal made 14 of 22 shots and added eight assists, while Kyle Kuzma and Montrezl Harrell each scored 15 points, with Harrell adding 10 rebounds.

Giannis Antetokounmpo led the Bucks with 29 points and 18 rebounds. Grayson Allen added 19 points for the Bucks, who opened a five-game road trip with their fifth loss in their past six games. Bobby Portis had 13 points and 13 rebounds.

Cole Anthony scored 24 of his season-high 33 points in the second half and Wendell Carter Jr. had a season-high 22 points to go along with 15 rebounds and six assists, helping Orlando past Utah for its first home win of the season.

Anthony hit two clutch jumpers in the final 90 seconds, and R.J. Hampton sank a 3-pointer with 21.5 seconds to go and the shot clock running down. Anthony made his only two free-throw attempts with 18.2 seconds left as Orlando ended a two-game losing streak.

Franz Wagner contributed 10 points for Orlando, which improved to 1–4 at home. Mo Bamba added nine points, seven rebounds and four blocks, and Gary Harris and Hampton each scored eight points off the bench.

Caris LeVert scored a season-high 22 points and T.J. McConnell added 18 as Indiana won at Sacramento for its first road victory in six tries.

Domantas Sabonis had 17 points and 10 rebounds, Chris Duarte added 15 points, and Myles Turner tallied 12 points and 15 rebounds for the Pacers, who were 1–6 to open the season but have won three of their last four games.

Tyrese Haliburton hit a 3-pointer to pull Sacramento within 93-91 with 1:28 remaining but missed a 3-point attempt with 2.5 seconds left, and McConnell hit one of two free throws for the final margin.

With the Thunder up 97-94, the Spurs’ Lonnie Walker IV missed a wild 3-point attempt when up against the shot clock with 7.5 seconds left, and Muscala hit his two free throws to cap the Thunder’s third win of the season.

Shai Gilgeous-Alexander added 14 points and nine assists for the Thunder, with Jeremiah Robinson-Earl and Luguentz Dort scoring 13 points each, and Darius Bazley getting 11 points and 11 rebounds.

Ricky Rubio had the most prolific game of his 11-year career, draining eight 3-pointers, scoring 37 points and adding 10 assists in a win over host New York.

The Cavaliers have won four in a row to move three games over .500 (7–4) for just the second time since LeBron James left for the Lakers following the 2017–18 season. The Knicks have lost three of four.

Jarrett Allen had 18 points and 17 rebounds for the Cavaliers while Evan Mobley finished with 26 points and nine rebounds. Darius Garland added 16 points for Cleveland. Julius Randle led the Knicks with 19 points, while Derrick Rose had 17 points and Evan Fournier finished with 15 points.

Buoyed by the energetic play of swingman Terance Mann off the bench, Los Angeles rode a 22-0 run in the fourth quarter to outlast visiting Charlotte for its fourth straight victory.

Mann finished with a double-double of 17 points and 10 rebounds in 34 minutes. Paul George led Los Angeles in scoring with 20 points and added nine rebounds and eight assists.

Playing back home in front of family and friends, Southern California native LaMelo Ball impressed with 21 points (13 of those in the first quarter) to go with seven rebounds and three assists. Miles Bridges also scored 21 points for Charlotte.