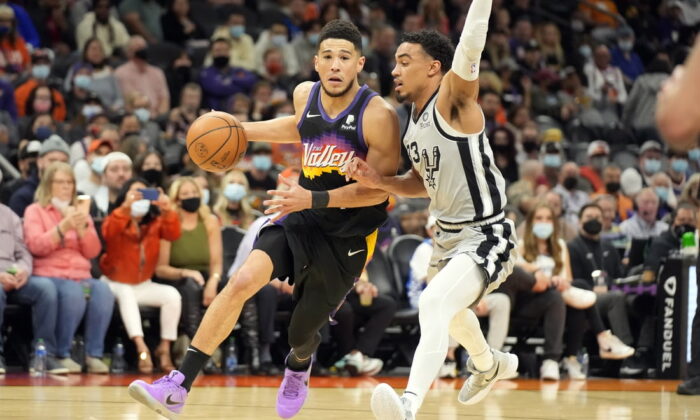 Devin Booker had a 28-point effort that included decisive, back-to-back 3-pointers in the final two minutes as the Phoenix Suns came from behind to beat the visiting San Antonio Spurs 115–110 Sunday to win their 10th straight game.

The Suns trailed by 12 points heading into the fourth quarter but rallied to take the lead. San Antonio, playing without three of its usual starters, fought back and had a 108–106 advantage before Booker hit his two tough baskets from beyond the arc to put Phoenix in front for good.

Mikal Bridges added a season-high 26 points for the Suns, who at 40–9 have the best record in the NBA. Chris Paul had 20 points and a season-high 19 assists, with Cameron Johnson scoring 11, and Bismack Biyombo and Ish Wainright contributing 10 each. Biyombo also took a game-high 11 rebounds.

Franz Wagner scored 18 points, including a go-ahead driving layup with 54 seconds remaining, and host Orlando finished a successful five-game homestand with a comeback win over Dallas.

Dallas superstar Luka Doncic (13-for-22 shooting) posted 34 points, 12 rebounds and 11 assists for his seventh triple-double this season and fifth in January. Doncic also notched his 26th game of the season with at least 20 points, five rebounds and five assists.

Karl-Anthony Towns posted a triple-double with 31 points, 11 rebounds and 10 assists, and Minnesota pulled away for a win over Utah in Minneapolis.

Jaden McDaniels added 22 points on a perfect 9-for-9 shooting performance for Minnesota, which snapped a two-game skid. Anthony Edwards scored 15 points and Jordan McLaughlin had 12.

Bojan Bogdanovic scored 23 points on 7-for-11 shooting to lead Utah, which has lost a season-worst five games in a row. Mike Conley scored 22, and Jordan Clarkson had 17 off the bench.

Nikola Jokic came one rebound shy of posting his sixth triple-double in the past nine games as Denver blew out host Milwaukee to win its fifth consecutive game, matching its longest winning streak of the season.

Jokic had 18 points, nine rebounds and 15 assists as his team ended Milwaukee’s four-game home winning streak. Aaron Gordon added 24 points and seven rebounds and shot 10-of-17 from the field, and the Nuggets were lethal from 3-point range, shooting 53.5 percent (23 of 43).

Giannis Antetokounmpo paced the Bucks with 29 points and nine rebounds and hit 9-of-19 from the field. Jrue Holiday contributed 14 points and eight assists.

Trae Young scored 36 points, sparking Atlanta to a seventh consecutive victory by overcoming an 11-point fourth-quarter deficit. Young was 12 of 22 from the floor and hit four 3-pointers including a decisive long-range bomb with 53.1 seconds left.

Malik Monk scored 33 for Los Angeles, including a 3-pointer that gave the Lakers a 104–93 lead with 7:27 remaining, but Atlanta answered with a 14–2 run, taking the lead on a 3-pointer from Lou Williams with 7:27 remaining. The game was tied at 121 with 1:52 remaining but the Hawks scored the final eight points of the game.

The Lakers played without LeBron James, who missed his third consecutive game (all defeats) because of left knee soreness.

Reggie Jackson and Brandon Boston Jr. each scored 19 points as Los Angeles pulled away with a strong fourth quarter to defeat host Charlotte.

LaMelo Ball poured in 23 points to go with 10 assists and Miles Bridges had 18 points for Charlotte, which shot just 8 of 34 on 3-pointers. The Clippers are 4–3 on their long road trip, which concludes Monday in Indiana.

Nikola Vucevic had 24 points and 14 rebounds to lead a balanced attack as Chicago cruised to a win over visiting Portland.

DeMar DeRozan had 23 points and 10 assists, Zach LaVine scored 20 points, Coby White added 18 and Javonte Green scored a season-high 16 for Chicago, which led by as many as 19 in the third quarter. At 31–18, the Bulls matched their win total from last season.