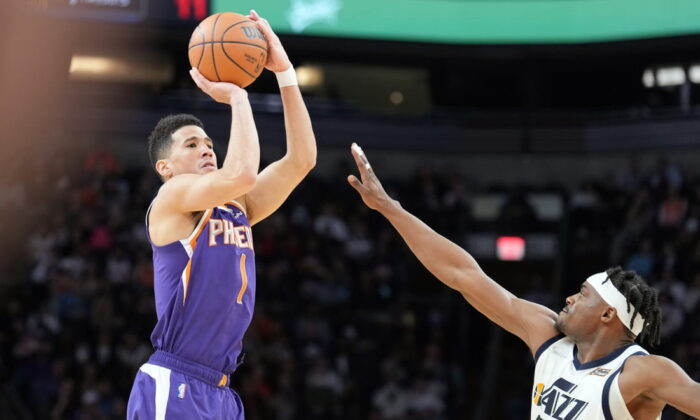 Devin Booker scored 33 points while Chris Paul added 27 points and 14 assists to lead the Phoenix Suns to a 115–109 victory over the Utah Jazz on Monday night.

Paul poured in 15 points in the fourth quarter as Phoenix came back from a five-point deficit early in the period. He also had nine rebounds in the game plus an uncharacteristic seven turnovers.

Bismack Biyombo chipped in 16 points and 13 rebounds off the Phoenix bench. Cameron Johnson finished with 20 points as the Suns won their seventh straight game.

Jordan Clarkson scored 22 points to lead the Jazz, who lost for the eighth time in their past 10 games. Utah’s Trent Forrest added a career-high 17 points, the first time in his 67 career NBA games that he scored in double figures.

Darius Garland posted one of three double-doubles for Cleveland, which frittered away all of a 15-point fourth-quarter lead before Garland’s 3-pointer with 1:23 left gave the hosts the lead for good in a win over New York.

The 3-pointer was the only one of the game for Garland, who finished with 13 points and 12 assists as the surging Cavaliers won for the seventh time in eight games. Kevin Love had 20 points and 11 rebounds off the Cleveland bench, and Evan Mobley added 15 points and 12 boards.

RJ Barrett scored 24 points for the Knicks, who have lost four of their past five. Julius Randle had 18 points but missed a turnaround desperation 3-point attempt from near half-court at the buzzer.

Shai Gilgeous-Alexander (31 points, 10 assists) missed a potential game-tying 3-pointer with 2.3 seconds left. The Thunder have lost six consecutive games and 13 of their past 15.

Devonte’ Graham scored 25 points and host New Orleans held off a 3-point barrage by Indiana. Graham made 5 of 9 3-point attempts while his teammates made just 1 of 21. The Pacers made 19 of 46, matching their season high for made 3-pointers.

Josh Hart added 22 points with 10 rebounds while Jonas Valanciunas had 16 points, 12 rebounds, and six assists for New Orleans, which has won two straight and four of its past six games.

Indiana rookie Duane Washington Jr. scored a season-high 21 points by sinking 7 of 12 from deep. Caris LeVert added 19, but Indiana fell for the 12th time in 15 games.