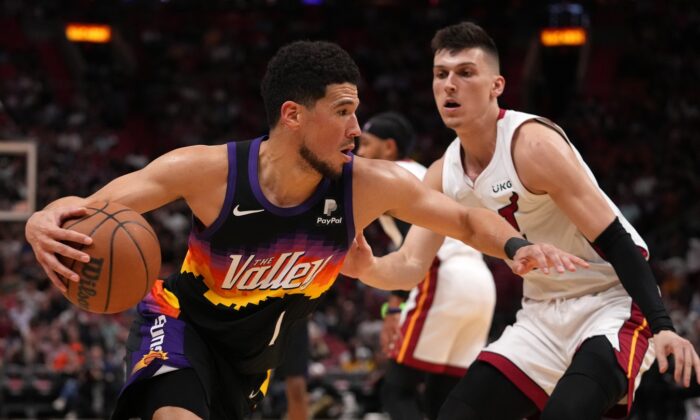 Devin Booker returned from a four-game COVID-protocol absence and had a near triple-double, helping the Phoenix Suns clinch the NBA’s first playoff spot with a 111–90 win over the Miami Heat on Wednesday night.

Booker finished with 23 points, nine assists and eight rebounds, while Phoenix also got 21 points from Mikal Bridges and 19 points and 10 rebounds from Deandre Ayton. JaVale McGee added 11 points and a season-high 15 rebounds off the bench.

Miami, which has won 12 of its past 15 contests, was led by Duncan Robinson (22 points), Tyler Herro (17 points) and Bam Adebayo (17 points). Kyle Lowry added five points and a game-high 10 assists.

Fred VanVleet poured in 26 points in his return after a five-game absence because of injury and Scottie Barnes added 20 points, 18 of them in the second half, as visiting Toronto rolled to a win over San Antonio.

Pascal Siakam also scored 20 points for the Raptors, with Gary Trent Jr. hitting for 17 and Precious Achiuwa adding 13 points as Toronto snapped a three-game losing streak. The Spurs’ Keldon Johnson led all scorers with 27 points while Dejounte Murray racked up 25 points and 12 assists.

Rookie Jalen Green scored 13 consecutive Houston points bridging the fourth quarter and overtime, and the Rockets pulled away for a win over visiting Los Angeles.

LeBron James posted his fifth triple-double of the season with 23 points, 14 rebounds and 12 assists for Los Angeles. Russell Westbrook added 30 points, eight rebounds and six assists, but the Lakers allowed the Rockets to shoot 51 percent from the floor, including 17 of 40 (42.5 percent) from 3-point range.

Austin Rivers gave Denver the lead for good on a 3-pointer with 3:52 remaining and Nikola Jokic capped a 38-point, 18-rebound performance with a key three-point play as the visiting Nuggets recorded a victory over Sacramento.

In winning, Denver took advantage of the suspension of Sacramento standout Domantas Sabonis, who was banned for one game after being cited for charging aggressively at an official during an ejection in Monday’s home loss to the New York Knicks. Monte Morris saved seven of his 20 points for the final 5:25, helping the Nuggets sweep the season series from Sacramento for the second time in the last four years.

De’Aaron Fox had a team-high 32 points for the Kings. Harrison Barnes backed Fox with 17 and Trey Lyles chipped in with 14 to complement a team-high nine rebounds.

Luke Kennard scored 19 points for the Clippers, who won after trailing by as many as 10 points. It was mere shades of Los Angeles’ 35-point comeback victory Jan. 25 at Washington, which tied for the second-largest rally in NBA history. Kennard scored seven points in the final nine seconds of that one.

Kristaps Porzingis scored 19 points and Rui Hachimura added 18 as Washington lost for the fourth time in its last six games. The Wizards fell short in their bid to win consecutive games for the first time in nearly two months and lost on the road against the Clippers for the 14th consecutive time.

Giannis Antetokounmpo poured in 43 points to lead Milwaukee to a victory over visiting Atlanta to extend the Bucks’ winning streak to six games.

The Hawks had no answer for the two-time MVP, who went 15-for-22 from the field and grabbed 12 rebounds. Bobby Portis chipped in with 23 points and 15 rebounds, and Khris Middleton supplied 23 points and eight assists.

Jayson Tatum pumped in 44 points as visiting Boston recovered from a midgame slide to run away from Charlotte.

Tatum shot 16-for-24 from the field, making 6 of 9 3-point attempts. He was 6-for-6 on free throws. Jaylen Brown racked up 15 points and Marcus Smart had 12 points and nine assists for the Celtics, who won their fourth game in a row.

Julius Randle scored 26 points for New York, which extended its winning streak to three games by leading wire-to-wire at Dallas.

Luka Doncic scored 31 points for the Mavericks, who struggled badly from outside as their five-game winning streak ended. Dallas missed its first 19 3-point attempts and finished 6-for-44 (13.6 percent) from beyond the arc.

DeMar DeRozan pumped in 36 points as visiting Chicago ended a five-game losing streak and continued its dominance over Detroit.

DeRozan made 12 of 25 field goal attempts and 12 of 13 free throws. He added eight rebounds, four assists and two steals as the Bulls defeated the Pistons for the 11th consecutive time and swept the four-game season series.

Cade Cunningham led the Pistons, who had their three-game winning streak snapped, with 22 points and six assists.

Beasley sank 11 of his 17 field-goal attempts—all of them from beyond the arc. Karl-Anthony Towns registered 13 points and 11 rebounds for the Timberwolves. Taurean Prince scored 17 points off the bench, and Anthony Edwards contributed 16.

Aaron Wiggins led the Thunder with 25 points on 9-for-19 shooting, including 5-for-8 success from long distance, and he grabbed nine rebounds. Isaiah Roby finished with 15 points and Darius Bazley scored 14 for Oklahoma City, which lost its fourth game in a row.

Cole Anthony scored 19 points and Terrence Ross had 12 of his 14 points in the fourth quarter as visiting Orlando held off New Orleans.

Bojan Bogdanovic continued his hot streak, scoring 27 points with six 3-pointers, to lead Utah to a thumping of Portland in Salt Lake City.

Bogdanovic, who sat out the fourth quarter with the rest of the Jazz starters, sizzled the nets with four treys and 14 points in the third quarter. The forward has averaged 27.7 points on 61.4 percent shooting with 21 3-pointers in the past three games.

Trendon Watford scored a team-high 22 points off the bench for the Blazers, who dropped their sixth consecutive game. Five of those losses have been by 30 or more points.