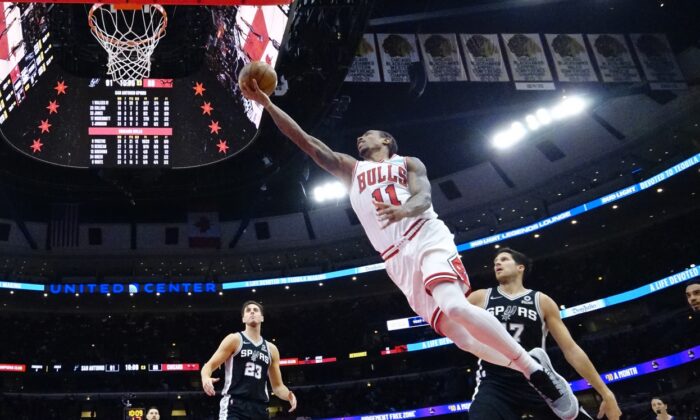 DeMar DeRozan poured in 40 points and continued his historic scoring run as the Chicago Bulls outlasted the visiting San Antonio Spurs 120–109 on Monday to win their fourth straight game.

The Bulls trailed by six points entering the fourth quarter but then DeRozan took charge, scoring 13 of Chicago’s next 15 points to give the Bulls the lead. The Bulls never trailed again, as DeRozan and Nikola Vucevic dominated down the stretch.

DeRozan has scored 30 or more points in seven consecutive games (improving on a career-high) and established a franchise record with his sixth straight game of at least 35 points, supplanting the mark set by Michael Jordan in the 1996–97 campaign. Vucevic added 25 points and 16 rebounds, with Coby White scoring 24 points.

Terance Mann scored a season-high 25 points and Reggie Jackson added 19 points, nine assists and eight rebounds as host Los Angeles pulled away in the second half to hand Golden State its third loss in four games.

Ivica Zubac finished with 18 points and eight rebounds as the Clippers won consecutive games for just the second time since mid-January.

Stephen Curry scored 26 of his 33 points in the first half for Golden State. Andrew Wiggins had 13 points, and Klay Thompson managed just seven points while going 3 of 14 from the field and 1 of 5 from 3-point range.

Donovan Mitchell scored 30 points and Rudy Gobert played well after a nine-game absence but then was ejected as Utah pummeled Houston in Salt Lake City for its sixth win in a row.

Gobert, who had been out due to a left calf strain, recorded 14 points and seven rebounds. He played 22 minutes before his night ended when he was tossed midway through the fourth quarter after getting whistled for his second technical foul.

Houston’s Kenyon Martin Jr. scored 16 points, while Eric Gordon, who had missed three games with a left heel injury, and Jae’Sean Tate each added 14. The Rockets lost their fifth straight game and fell for the ninth time in the past 10.

Seth Curry scored 23 points in his debut for Brooklyn, which shot 51.2 percent in ending an 11-game losing streak by beating Sacramento in New York.

Jeff Green and Will Barton added 17 points apiece for the Nuggets.

Franz Wagner scored 26 points to pace the Magic, who fell for the third game in a row and the fifth time in six contests. Wendell Carter Jr. had 25 points and 12 rebounds, and Jalen Suggs scored 16 points.

Kyle Kuzma scored 17 of his 23 points in the third quarter as Washington notched a win over visiting Detroit.

Kentavious Caldwell-Pope had 16 points and Deni Avdija recorded his second double-double of the season with 12 points and a career-high 15 rebounds for Washington, which has won its first two meetings against Detroit this season.

Giddey scored a season-high 28 points to go along with 12 assists and 11 rebounds. Darius Bazley collected 23 points and eight rebounds for the Thunder, who snapped a five-game losing skid.

New York’s Julius Randle collected 30 points, 13 rebounds and 10 assists for his first triple-double of the season and the 13th of his career. Evan Fournier had 29 points and Quentin Grimes added 19 for the Knicks, who have lost 12 of their past 15 games.

Simons poured in 31 points on 12-of-24 shooting to hand the Bucks just their second loss over the last six games. Josh Hart contributed 27 points, seven rebounds and five assists, and Jusuf Nurkic totaled 23 points and 16 rebounds to notch his seventh straight double-double.

With Giannis Antetokounmpo sidelined due to an ankle injury, Jrue Holiday paced Milwaukee with 23 points and six assists.

Jonas Valanciunas added 18 points, Jaxson Hayes scored 14, and Herbert Jones and Garrett Temple had 11 each. Brandon Ingram had 10 points, 11 rebounds and eight assists, falling two assists shy of what would have been his first career double-double after sitting out the fourth quarter.

Fred VanVleet scored 20, Pascal Siakam added 18 and Chris Boucher had 15 to lead the Raptors, who lost their second straight game after an eight-game winning streak.