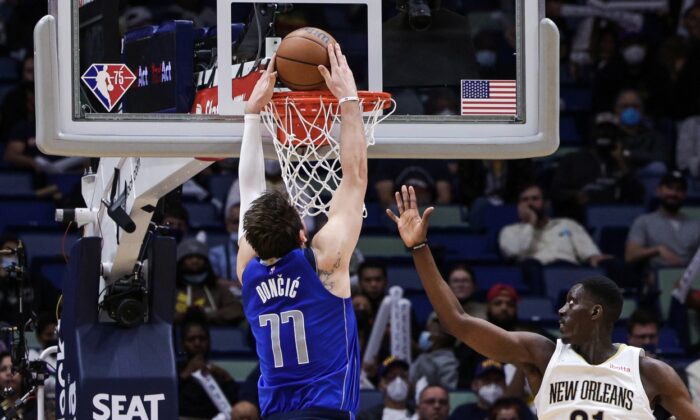 Luka Doncic recorded 49 points and 15 rebounds and the visiting Dallas Mavericks never trailed in a 125–118 victory over the New Orleans Pelicans on Thursday.

Doncic fell two assists short of a triple-double and two points short of his season high.

Jalen Brunson added 23 points, Maxi Kleber scored 20 and Dorian Finney-Smith had 14 as the Mavericks won for the sixth time in their final seven games before the All-Star break.

CJ McCollum scored 38, Jaxson Hayes had 18, Jonas Valanciunas added 16 points and 18 rebounds, Devonte’ Graham and Brandon Ingram scored 12 each and Tony Snell had 11 for the Pelicans. New Orleans finished 2–4 on its longest homestand of the season.

Joel Embiid scored 42 points and visiting Philadelphia survived Milwaukee’s second-half comeback. The 76ers snapped a six-game losing streak against their Eastern Conference rivals that dated back to the 2019–20 season.

Embiid hit 14 of 21 shots and added 14 rebounds to help the 76ers get back on track after a 48-point loss to the Boston Celtics on Tuesday. Tobias Harris chipped in 19 points, eight rebounds and four assists. Tyrese Maxey also had 19 points, and Georges Niang tallied 18.

Giannis Antetokounmpo paced Milwaukee with 32 points (on 13-of-23 shooting) plus 11 rebounds and nine assists. Jrue Holiday added 24 points and Khris Middleton contributed 19, but he missed a potential game-tying 3-pointer at the final buzzer.

Jimmy Butler hit a pair of jumpers in the final 66 seconds of the second overtime as Miami beat Charlotte in the last game for each team prior to the All-Star break.

Kyle Lowry scored 25 points, Duncan Robinson tallied 21 and P.J. Tucker, Bam Adebayo and Butler all had 15 for the Heat. Adebayo had 13 rebounds, and Tucker and Butler both pulled in 10 boards.

Miles Bridges racked up 29 points and Montrezl Harrell posted 24 for the Hornets. Kelly Oubre Jr. and P.J. Washington both had 15 points, and LaMelo Ball notched 14 points, 14 assists and 10 rebounds.

Marcus Morris Sr. scored 27 points and Luke Kennard added 25 as Los Angeles went into the All-Star break with a rout of visiting Houston.

Terance Mann scored 20 points as the Clippers won for the third time in their past four games. Their only setback in that stretch came on the road against the Phoenix Suns, the team with the best record in the NBA.

Rui Hachimura scored 13 of his season-high 20 points in the fourth quarter as Washington recorded a victory over Brooklyn in New York.

Rookie Corey Kispert added 16 points and sank four of Washington’s 12 3-pointers as the Wizards beat the Nets for the second time in eight days. Ish Smith added 15 points and Deni Avdija contributed 13 for the Wizards, who shot 55.4 percent.

Patty Mills scored 17 of his 22 in the first half and rookie Cam Thomas added 20 overall, but the Nets shot 40.4 percent and were outscored 54–28 in the paint.