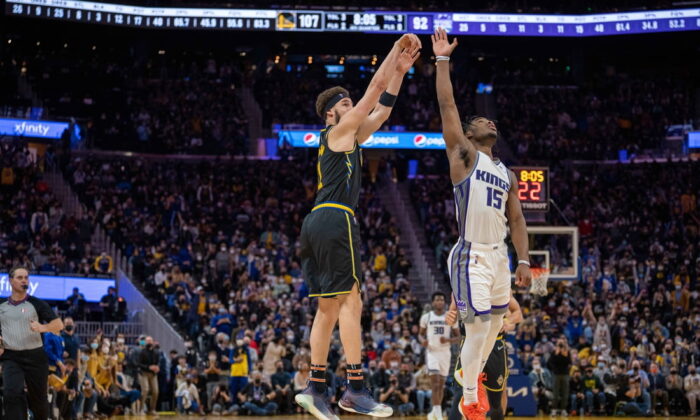 Klay Thompson passed Kobe Bryant on the all-time list with the sixth of his seven 3-pointers Thursday night as the Golden State Warriors used a long-distance assault to thump the Sacramento Kings 126–114 in San Francisco.

Thompson finished with a team-high 23 points, Stephen Curry had 20 and Jonathan Kuminga 18 for Golden State, which won its league-best eighth in a row en route to becoming the NBA’s second 40-game winner. The Warriors trail only the Phoenix Suns in the Western Conference and league standings.

Rookie Davion Mitchell had a season-best 26 points and Harrison Barnes scored 25 for the Kings, who were playing for the second consecutive night. Sacramento beat the visiting Brooklyn Nets 112–101 on Wednesday to snap a seven-game losing streak.

Marcus Morris Sr. scored 29 points and Reggie Jackson added 25, including the go-ahead score with 4.1 seconds remaining, as the Los Angeles Clippers enjoyed their long-awaited return home with a victory over the visiting Los Angeles Lakers.

Serge Ibaka added 20 points and eight rebounds as the Clippers won after going 4–4 on a road trip.

The Lakers’ Anthony Davis scored 30 points and secured 17 rebounds, but he missed a running jumper for the win at the buzzer. The Lakers lost Carmelo Anthony late in the first half due to a right hamstring ailment.

Scottie Barnes tied the game with a layup in the final second of regulation and scored the go-ahead jumper in overtime as Toronto defeated visiting Chicago.

Nikola Vucevic had 30 points and 18 rebounds for the Bulls. DeMar DeRozan added 28 points, Coby White scored 16 and Zach LaVine had 15.

Young made 16 of 25 shots—6 of 11 from 3-point range—in his return from a one-game absence caused by a right shoulder contusion. Kevin Huerter sank five 3-pointers and joined John Collins in finishing with 19 points. Collins, however, left late in the fourth quarter with an apparent right arm injury.

The Heat were up six two minutes into the third quarter before running off a 15–3 spurt that all but decided the game. Bam Adebayo had 18 points and 11 rebounds for Miami, while Jimmy Butler and Duncan Robinson scored 17 points each.

Karl-Anthony Towns had 21 points and 14 rebounds for Minnesota, while Malik Beasley contributed 18 points.