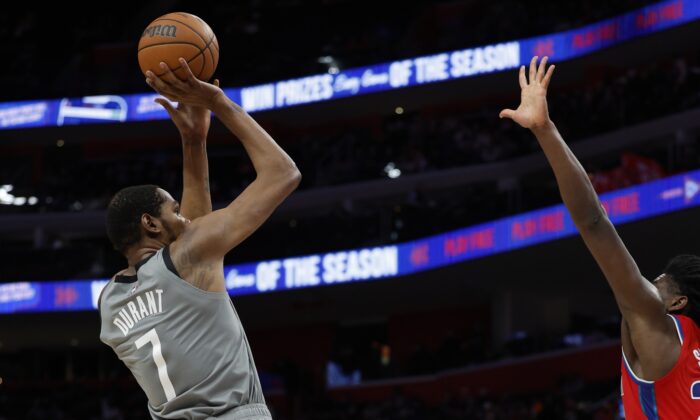 Patty Mills added 18 points and five assists for the Nets, while LaMarcus Aldridge had 15 points and Cam Thomas tossed in 13 for Brooklyn, which outscored Detroit 30–13 in the fourth quarter. The Nets rested perennial All-Star guard James Harden.

LeBron James had 30 points, 11 rebounds and 10 assists to help Los Angeles to a win against visiting Orlando.

James has 101 triple-doubles in his NBA career. Talen Horton-Tucker and Russell Westbrook scored 19 points each, and Carmelo Anthony scored 13 off the bench for the Lakers, who have won three of four.

Cole Anthony scored 21 points, Franz Wagner had 20 points, Wendell Carter Jr. scored 16, and Terrence Ross finished with 15 points off the bench for the Magic, who have lost five in a row and 12 of 13.

It was just the fourth win in the last 13 games for the Mavericks and just the second time in six games Dallas has scored 100 or more points. Maxi Kleber added 16 points and Moses Brown 15 off the bench, both season highs. Kleber was 5-for-6 from inside the arc.

For the Thunder, it was the 12th loss in 15 games and the fifth consecutive loss at home. Shai Gilgeous-Alexander led the Thunder with 18 points, but was just 6-for-15 from the floor, making just 1 of 5 from beyond the arc. No other player scored more than 11 for Oklahoma City.

Jakob Poeltl and Derrick White scored 24 points each, while Dejounte Murray added a triple double, as San Antonio was at its best in the fourth quarter in a win over visiting New Orleans.

Murray had 10 points, 12 rebounds and 10 assists, while Keldon Johnson added 17 points for San Antonio, Doug McDermott scored 13 and Lonnie Walker IV had 11 points. Poeltl also had 12 rebounds, with seven of those on the offensive end.

Karl-Anthony Towns had 23 points and 10 rebounds for the Wolves while D’Angelo Russell made two key 3-pointers late in the fourth quarter and finished with 18 points following a three-game absence due to a hamstring injury.

Anfernee Simons made six 3-pointers and scored a season-high 26 points to lead Portland, which has lost five in a row and eight of its last nine. Portland star Damian Lillard returned after missing the last five games due to an abdomen injury and tallied 24 points, 11 rebounds and six assists in 37 minutes.

Antetokounmpo earned his first triple-double since March 15. Portis recorded 19 points and 10 rebounds for the Bucks, who have won two in a row and 12 of their last 14 games. Jrue Holiday had 13 points and five assists and Grayson Allen added 12 points to the Bucks’ balanced attack.

Quentin Grimes made seven 3-pointers to finish with 27 points for the Knicks. Kevin Knox II drained five shots from beyond the arc to highlight his 18-point performance.