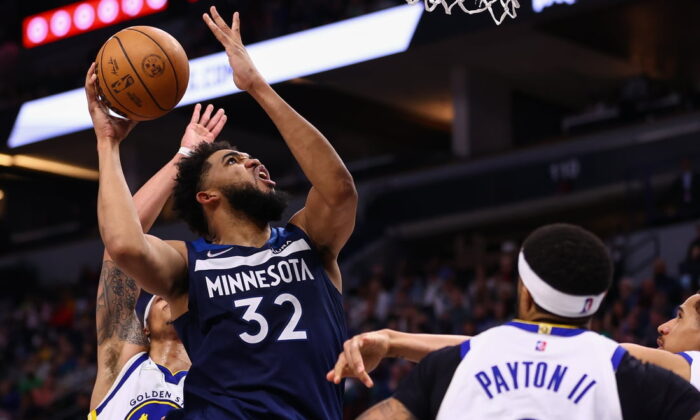 Karl-Anthony Towns scored 39 points and grabbed nine rebounds, D’Angelo Russell added 22 points and seven assists and the Minnesota Timberwolves cruised to a 129–114 win over the Golden State Warriors on Tuesday in Minneapolis.

The Timberwolves went on a 12–1 run to close the first quarter and take a lead they never relinquished. Minnesota’s advantage swelled to as many as 21 points through a combination of efficient offense and stingy defense.

Minnesota held Golden State to 41-of-90 shooting on the other end, including 13-of-45 from deep.

Gary Trent Jr. scored 12 of his 24 points in the fourth quarter as Toronto defeated visiting Brooklyn to complete a home-and-home sweep of the Nets.

Scottie Barnes added 18 points and 10 rebounds for the Raptors, who defeated the Nets 133–97 on Monday in New York. Toronto’s Pascal Siakam had 18 points before fouling out late in the fourth quarter. Malachi Flynn added 15 points.

Boston overcame a 17-point deficit in the first half to defeat visiting Atlanta.

Jayson Tatum led the Celtics with 33 points on 12-for-25 shooting to go along with eight rebounds and seven assists. The Celtics held a 56–33 scoring edge in the second half.

Atlanta’s Trae Young scored 31 points but shot just 2 of 7 from the 3-point arc and was held to nine points in the second half. Bogdan Bogdanovic scored 15 of his 25 after halftime.

Zubac paired 22 points with 12 rebounds to lead the Clippers to their sixth win in seven games—with the past two coming against the Rockets. Jackson had 17 points, six assists and five rebounds while Morris chipped in 18 points while shooting 4 of 6 from 3-point range.

Kyle Kuzma collected 21 points and nine rebounds to fuel host Washington to a victory over Detroit.

Thomas Bryant had 16 points off the bench and Kentavious Caldwell-Pope added 15 for the Wizards, who had eight players score in double figures. Washington shot 50 percent from both the floor (41 of 82) and 3-point range (13 of 26) en route to snapping a modest two-game losing skid.

LeBron James registered 26 points and 12 rebounds and Carmelo Anthony added 20 points for the Lakers, who have lost 10 of their past 13 games and 15 of 21.