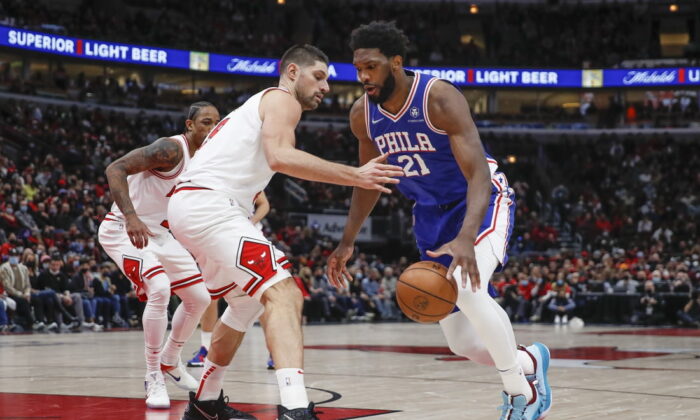 Joel Embiid had 40 points, 10 rebounds and two blocked shots to lift the Philadelphia 76ers past the host Chicago Bulls 119–108 on Sunday.

It was the seventh game that Embiid scored at least 40 points this season.

Kyrie Irving finished with 27 points and 11 assists, Cam Thomas had 20 points, Blake Griffin finished with 19, Patty Mills scored 14, and Bruce Brown had 10 for Brooklyn, which has lost eight consecutive games.

Norman Powell scored 28 points in his Clippers debut and Marcus Morris Sr. added 20 as Los Angeles lost for the third time in its last five games. Robert Covington, who also was making his Clippers debut, added 13 points. Powell and Covington were acquired in a trade Friday from the Portland Trail Blazers.

Karl-Anthony Towns had 24 points and 12 rebounds and Minnesota extended its winning streak to four games by topping Detroit in Minneapolis.

D’Angelo Russell, who missed the previous four games with a shin contusion, contributed 22 points and eight assists, and Malik Beasley supplied 20 points off the bench. Anthony Edwards added 17 points and five assists for the Timberwolves, who won 128–117 in Detroit on Thursday.

Saddiq Bey led Detroit with 24 points and eight rebounds. Trey Lyles had 16 points and seven rebounds, and the Pistons have lost four straight, and eight of their last nine games.

Jaylen Brown scored 26 points, Dennis Schroder contributed 22 off the bench and visiting Boston extended its season-best win streak to five games with a victory over Orlando.

Boston easily overcame an uneven shooting performance by All-Star Jayson Tatum, who had 15 points on 6-for-18 shooting from the floor, including 2-for-8 from 3-point range, to defeat Orlando for the ninth straight time dating back to January 2020. Tatum also collected nine rebounds and seven assists.

Jalen Suggs paced Orlando with 17 points, but the Magic shot 35.8 percent (29-for-81) from the floor and made only five triples (5-for-26) against one of the league’s top defensive clubs.

Despite being limited to 28 minutes because of foul trouble, Luka Doncic recorded his 45th career triple-double and led Dallas to a win over visiting Atlanta.

Doncic finished with 18 points, 10 rebounds and 11 assists for his ninth triple-double of the season and second of his career against Atlanta. The Mavericks also got 22 points from Reggie Bullock, who had six 3-pointers, and 22 points from Jalen Brunson.

Trae Young scored 17 points and had 11 assists for Atlanta, but he missed all six of his attempts from 3-point range. John Collins scored 22 points and had a season-high 18 rebounds, and De’Andre Hunter scored 14.

Cedi Osman led the way with 22 points and Cleveland came back from a 20-point deficit to blow out visiting Indiana.

The Cavaliers blew the game open by starting the fourth quarter with a 19–0 run, turning a 68–61 deficit into an 80–68 lead. Eighteen of Osman’s points came in the fourth quarter, when Cleveland outscored Indiana 37–17.

Kevin Love finished with 19 points and seven rebounds, while Jarrett Allen had 15 points and a game-high 17 rebounds. Allen has grabbed 39 rebounds in his last two games. Guard Chris Duarte led the Pacers with 22 points, and Duane Washington scored 17.

Brandon Ingram scored 33 points and had 12 assists as New Orleans rode a third-quarter surge to a road win over Houston.

Jaxson Hayes came off the bench to contribute 21 points and seven rebounds to help the Pelicans to their third consecutive victory, their longest winning streak since a four-game run from Dec. 15–23.

Christian Wood led the Rockets with 22 points and eight rebounds. Jalen Green and Garrison Mathews scored 18 apiece, and Josh Christopher (12) and Kenyon Martin Jr. (nine) combined for 21 off the bench.