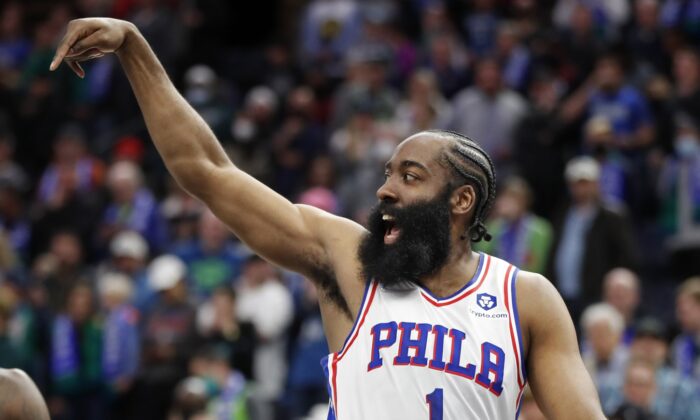 Joel Embiid finished with 34 points and 10 rebounds, and James Harden added 27 points, 12 assists, and eight rebounds in his debut to lift the Philadelphia 76ers past the host Minnesota Timberwolves 133–102 on Friday.

It was Harden’s first game with the Sixers since being acquired with Paul Millsap from the Brooklyn Nets for Ben Simmons, Seth Curry, Andre Drummond, and two first-round draft picks. Harden was sidelined with a strained hamstring for his first four games with the Sixers.

Tyrese Maxey contributed 28 points and four steals, and Matisse Thybulle chipped in with 11 points for the Sixers.

Marcus Morris Sr. hit a go-ahead jumper with 39.4 seconds remaining and the Clippers benefitted from a key call reversal 13 seconds later in a battle of Los Angeles teams, with the Lakers playing as the home team.

The wild finish featured two flipped calls, one that followed a Russell Westbrook miss with 26.3 seconds left and gave the Clippers possession. A second replay reversed a foul call on the Lakers, who missed multiple chances to tie in the closing seconds.

Terance Mann led seven players in double figures with 19 points for the Clippers, who beat the Lakers for a third straight time this season. LeBron James was held to a team-high 21 points for the Lakers, ending his run of 23 straight games with 25 or more points.

Jonas Valanciunas added 18 points and 17 rebounds and the Pelicans took control by outscoring Phoenix 42–31 in the third quarter. New Orleans finished with a 53–37 rebounding advantage.

Devin Booker scored 30 points, Deandre Ayton had 20, and Cam Johnson added 15 to lead the Suns, who lost for just the second time in 21 games. It was Western Conference-leading Phoenix’s second game since losing Chris Paul to a fractured thumb.

Tyler Herro scored a team-high 25 points off the bench for visiting Miami, which overcame a 46-point effort by RJ Barrett to beat New York.

Bam Adebayo finished with 16 points, 16 rebounds, and four blocked shots, Jimmy Butler scored 23 points, and Kyle Lowry added 19 points and nine rebounds for the Heat, who won for the seventh time in eight games and moved back into a tie with the Chicago Bulls atop the Eastern Conference at 39–21.

Barrett, who missed the final four games before the All-Star break due to a sprained left ankle, showed no signs of rust in his first action since Feb. 8. The 21-year-old scored 30 points in the first half—just six shy of his career high entering the night—and ended up with the most points by a Knicks player since Carmelo Anthony scored 46 points against the Utah Jazz on Nov. 14, 2014.

Luka Doncic scored 23 points on 8-of-24 shooting and dished out 11 assists with seven rebounds for the Mavericks. Dwight Powell totaled 22 points and seven boards, and Spencer Dinwiddie fired in 20 points for Dallas, which had won two in a row prior to the All-Star break.

Keldon Johnson and Jakob Poeltl had career-high scoring games, Dejounte Murray produced his 12th triple-double, and San Antonio needed all of it to beat host Washington in double overtime.

Johnson led the Spurs with 32 points, Poeltl added 28 points, 11 rebounds, and eight assists, and Murray—fresh off his first All-Star Game appearance—racked up 31 points, 14 assists, and 13 rebounds.

Kyle Kuzma tied his season high with 36 points and added eight rebounds and seven assists. Kentavious Caldwell-Pope added 24 points, Raul Neto scored 22, and Daniel Gafford hit for 17 points for Washington, which has dropped two of its past three games.

Terry Rozier had 23 points, nine assists, and four rebounds and Charlotte led all the way to rout visiting Toronto.

Kelly Oubre Jr. also scored 23 points for the Hornets, who had lost their three previous games and nine of the past 10.

The Thunder won for just the second time in nine games, while the Pacers have dropped eight of their last nine.

After Indiana shot 53.9 percent in regulation, it cooled off in overtime, making just 1 of 11 from the floor as the Thunder pulled off a split of the season series. Both games between the teams went to overtime.

Chuma Okeke scored 10 of his career-high 26 points in the fourth quarter, Wendell Carter Jr. finished with 24 points and 12 rebounds, and host Orlando ended a four-game losing streak at the expense of Houston.

Orlando fell behind by 14 points during the opening quarter before rallying to earn its sixth victory in 27 home games. The Magic also overcame a double-digit deficit to win for the seventh time this season. Okeke made 9 of 13 shots, including five 3-pointers, grabbed nine rebounds, and had three steals.