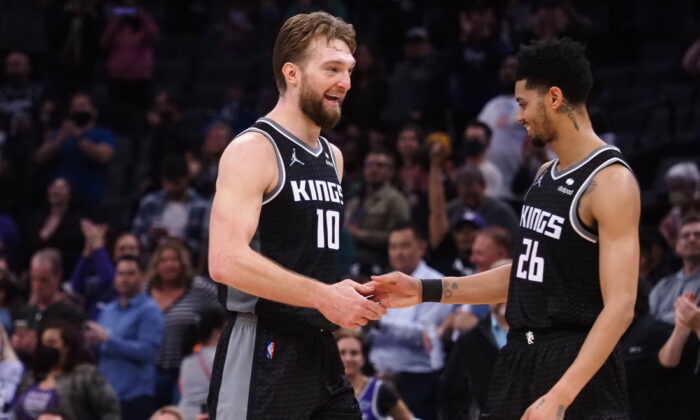 Sacramento Kings center Domantas Sabonis (10) celebrates with guard Jeremy Lamb (26) in the final seconds of the game against the Minnesota Timberwolves during the fourth quarter at Golden 1 Center in Sacramento, Calif., on Feb. 9, 2022. (Kelley L Cox/USA TODAY Sports via Field Level Media)
NBA

Domantas Sabonis recorded 22 points and 14 rebounds in his Sacramento debut and Damion Mitchell broke the game’s final tie with a dunk with 4:13 remaining as the host Kings avenged a blowout loss the day before with a 132–119 victory over the Minnesota Timberwolves on Wednesday night.

Acquired on Tuesday but unavailable when the Kings were drubbed 134–114 by the Timberwolves that night in the opener of a two-day, two-game sequence, Sabonis arrived in time to help Sacramento win for the third time in its past five games.

Jeremy Lamb and Justin Holiday, also acquired in the six-player trade with the Indiana Pacers, combined for 20 points and nine assists for Sacramento. The Kings avoided a season-series sweep with their first win in three tries against Minnesota this season.

Golden State’s Jordan Poole scored 18 points and Steph Curry added 16 points, but they shot a combined 10-for-27 from the field on a night the Warriors made just 35.9 percent of their shots.

Zach LaVine racked up 27 points in his second game since returning from a back injury, hitting five 3-point shots.Nikola Vucevic supplied 18 points, 15 rebounds, and eight assists and Coby White notched 15 points for the Bulls, who won for just the second time in their last five games.

The Hornets endured their season-high sixth consecutive loss, with the last four of those coming in home games. Charlotte’s LaMelo Ball notched 33 points, but it took a 12-for-25 outing from the field.

All-Star guard Darius Garland made a triumphant return to the lineup with a game-high 27 points in host Cleveland’s victory over San Antonio.

Garland had missed the previous four games with soreness in his lower back. Guard Caris LeVert, acquired Monday from the Indiana Pacers, made his Cavs debut and finished with 11 points in Cleveland’s seventh consecutive win at home and 13th of their last 15.

Pascal Siakam had 27 points and 16 rebounds to lead Toronto past host Oklahoma.

The Raptors have won a season-high seven in a row, while the Thunder lost for the third consecutive game and the 15th time in their last 19 games. Siakam was 13 of 17 from the floor, improving to 64.8 percent from the field against the Thunder in his career.

All five starters for the Raptors had at least 15 points, with Scottie Barnes adding 17, Gary Trent Jr. 16 and OG Anunoby 15 points to go with 10 rebounds.

Anfernee Simons scored 29 points and Jusuf Nurkic added 19 points with 12 rebounds as Portland found something to celebrate during a time of roster upheaval, ending a six-game losing streak with a victory over visiting Los Angeles.

Justise Winslow and Greg Brown III each had 11 points as the Trail Blazers won after the team made three trades in a span of six days in order to shape the roster for the future. Portland won for the first time since Jan. 28.

LeBron James scored 30 points and Anthony Davis added 17 for the Lakers, who lost for the sixth time in their last eight games. Los Angeles had just defeated Portland 99–94 at home last Wednesday.