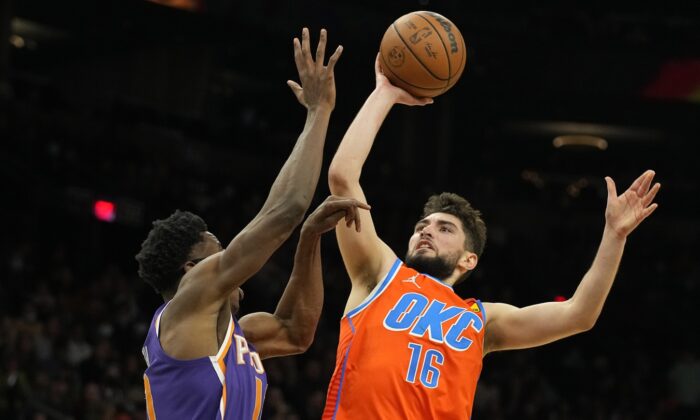 Devin Booker matched his season-high of 38 points while reaching a milestone as the Phoenix Suns earned a 115–97 victory over the visiting Oklahoma City Thunder on Wednesday night.

Chimezie Metu connected on a buzzer-beating 3-pointer on an inbounds play that began with 3.8 seconds remaining, giving Sacramento a win over visiting Dallas.

De’Aaron Fox paced a balanced Sacramento attack with 16 points. Barnes and Davion Mitchell followed with 14 each, Tyrese Haliburton had 12 to go with a game-high 10 assists, and Metu and Marvin Bagley III scored 11 apiece.

Jalen Brunson had a game-high 25 points to go with a team-high six assists and Kristaps Porzingis chipped in with 24 points to complement a team-high seven rebounds for the Mavericks, who will stay in Sacramento, and get a rematch Friday night.

Alec Burks poured in a season-high 34 points off the bench as visiting New York rallied in the fourth quarter to defeat depleted Detroit.

Immanuel Quickly had 18 points and RJ Barrett tossed in 15 for New York.

Detroit’s Saddiq Bey had a career-high 32 points and Hamidou Diallo supplied 31 points and 13 rebounds for the Pistons, who had 12 players listed as out, including eight in league protocols. They used six players who were signed to 10-day contracts in the past week.

Six Jazz players scored 15 or more points and the team shot 52.9 percent from the field to win its fifth straight game overall and its eighth in a row on the road.

Damian Lillard and Norman Powell each fired in 32 points for the Trail Blazers, who have dropped three games in a row. Portland, which never led and trailed by as many as 22 points, was without two coaches, including head coach Chauncey Billups, and seven players who are all in the NBA’s health and safety protocols.

Terry Rozier poured in 35 points, including a hot stretch late in the game, as Charlotte Hornets defeated Indiana at Indianapolis.

Three times in the last six minutes when the Pacers made runs, Rozier answered with jumpers. His 3-pointer stretched the edge to 111–103 with 2:33 to play. He had 13 points in the fourth quarter.

Charlotte has a three-game winning streak. Caris LeVert led the Pacers in scoring for the sixth time in the last eight games, racking up 27 points.

A 12-point winner at Atlanta on Monday, the Bulls swept the home-and-home series while sending the short-handed Hawks to their third straight defeat and fifth loss in six games. Vucevic contributed 16 points and 20 rebounds for his third straight double-double and fourth in five games. White added 17 points and 12 of Chicago’s season-best 38 assists.

Trae Young scored a game-high 26 points to go with 11 assists for Atlanta in the opener of a six-game road trip. Beset by numerous absences due to the NBA’s health and safety protocols for COVID-19, the Hawks fielded a roster that included just four regular rotation players, and had numerous additions who signed 10-day hardship contracts.

Desmond Bane scored 20 points and Jaren Jackson Jr. had 15 for Memphis, which trailed for nearly all of the first three quarters before outscoring the Lakers 26–16 in the final period.

LeBron James tied his career-high with eight 3-pointers and finished with 37 points, 13 rebounds, and seven assists for the Lakers. Russell Westbrook recorded his eighth triple-double of the season with 16 points, 10 rebounds, and 12 assists.

Marcus Morris Sr. finished with 23 points and 10 rebounds against his former team to lead short-handed Los Angeles past host Boston.

Luke Kennard, Eric Bledsoe, and Terance Mann added 17 points apiece for the Clippers, which had lost two straight, and five of its previous six games.