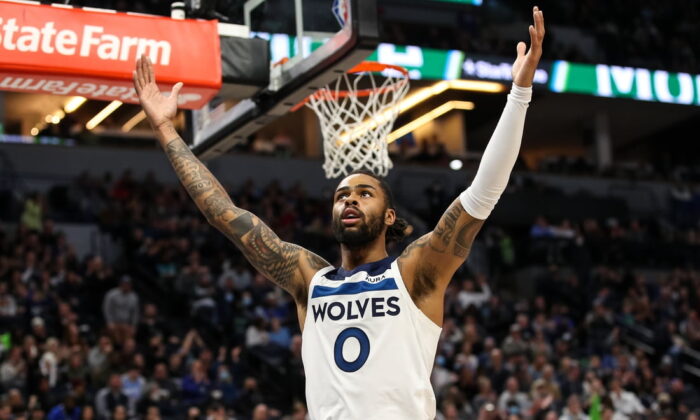 Timberwolves guard D'Angelo Russell (0) pumps up the crowd against the Memphis Grizzlies in the third quarter at Target Center in Minneapolis, Minn., on Feb 24, 2022. ( David Berding/USA TODAY Sports via Field Level Media)
NBA

NBA Roundup: D’Angelo Russell Scores 37 as Wolves Get by Grizzlies

D’Angelo Russell scored 23 of his season-high 37 points in the fourth quarter, including a go-ahead 3-pointer with 1:23 remaining, as the Minnesota Timberwolves edged the Memphis Grizzlies 119–114 on Thursday in Minneapolis.

Karl-Anthony Towns had 22 points and 11 rebounds for Minnesota, which has won eight of its past 11 games. Malik Beasley finished with 17 points and Patrick Beverley added 13. Russell dished out a game-high nine assists.

DeMar DeRozan converted the go-ahead three-point play with 15.1 seconds remaining as part of a 37-point scoring effort to give Chicago a win over visiting Atlanta.

DeRozan was 15 of 21 to extend his NBA record of scoring at least 35 points and shooting 50 percent or better to eight consecutive games. He also hit 30 points for the ninth straight game, moving within two of the franchise mark set by Michael Jordan during the 1986–87 season. Zach LaVine scored 20 points as Chicago won its sixth straight game.

Stephen Curry complemented his 18 points with a season-best 14 assists as Golden State came out of the All-Star break at Portland with one of its best offensive performances of the season.

Klay Thompson tied Curry for team-high scoring honors with 18 points and Jonathan Kuminga came off the bench for 17 more as the Warriors, who had lost four of five, put up their second-highest point total of the season.

Anfernee Simons poured in a game-high 24 points for the Trail Blazers, who went into the break on a four-game winning streak.

Devin Booker recorded 25 points and 12 assists as visiting Phoenix pulled away from Oklahoma City to win an eighth straight game.

Cameron Johnson and Mikal Bridges each scored 21 points for the Suns, who have won 19 of their past 20. They played without Chris Paul, who fractured his right thumb in Phoenix’s final game before the All-Star break.

In his first game since Jan. 28, Oklahoma City’s Shai Gilgeous-Alexander scored 32 points on 13-of-22 shooting. But the Thunder lost for the seventh time in eight games. Oklahoma City also got 15 points, nine rebounds and six assists from Josh Giddey.

Jokic amassed 25 points, 12 rebounds, nine assists and four steals as the Nuggets prevailed for the sixth time in seven games. Denver led almost throughout, trailing only by a basket early into the first quarter.

Despite playing from behind most of the way, Sacramento remained within striking distance behind game highs of 33 points and 14 rebounds from Domantas Sabonis. The double-double was Sabonis’ fourth in five games since joining the Kings in a trade from Indiana before the All-Star break.

Tatum hit 30 points for the 18th time this season by making 10 of 20 shots. Jaylen Brown added 18 points and six assists before appearing to injure his wrist with about 5 1/2 minutes left. Marcus Smart hit five of the Celtics’ 17 3-pointers and contributed 15 points.

Seth Curry scored 22 points for the Nets, who lost for the 13th time in 15 games. Bruce Brown added 15 points.

Cunningham finished with 17 points, six rebounds, and six assists. Marvin Bagley III and Jerami Grant had 16 points apiece for Detroit, which won its second game in a row after an eight-game skid.

Lauri Markkanen led the Cavaliers, who have lost three straight, with 22 points. Brandon Goodwin had 15 points while Evan Mobley and Rajon Rondo tossed in 12 points apiece.