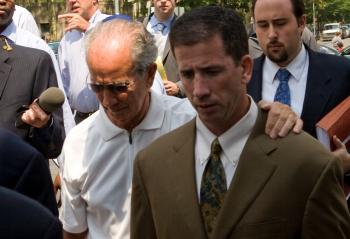 NEW YORK—Ex-NBA Ref Tim Donaghy was sentenced to 15 months in prison on Tuesday, a year after pleading guilty to felony charges of gambling on basketball games he refereed.

The sentence, issued by U.S. District Judge Carol Amon at about noon at the Brooklyn Federal Courthouse, also included about $200,000 in restitution to the NBA and counseling for his gambling addiction.

“I’m very sorry,” Donaghy told the courtroom. “I brought shame on myself, my family, and to the profession that I love.”

Donaghy resigned from the NBA in July of last year, a month after the FBI started investigating him and the NBA on gambling allegations. Donaghy later admitted to supplying two co-conspirators, who used to be classmates of Donaghy, with information on specific games he called. He was paid up to $5,000 per tip.

“He always understood he would be punished, and this is part of the punishment,” he told a crowd of reporters outside the courthouse after the sentencing.

Lauro, despite being “thrilled with the outcome,” blasted the NBA and the federal officials regarding their ignoring Donaghy’s allegations that the gambling problem in NBA officiating was expansive and prevalent.

“I think from Day One, the strategy of the NBA was to demonize and ostracize Mr. Donaghy and to ignore the substantial cooperation that he has provided as well as the honest insight and input he has provided in this case…The NBA has done nothing except criticize the messenger,” Lauro said.

“…I’m hopeful that at some point the true facts of this story will be told… This story has not ended,” Lauro added.

Lauro pointed to what he said was the hypocritical nature of government prosecutors.

When asked what would happen to Donaghy, Lauro was optimistic.

“I think he’ll serve his time, I think he’s been responsible, he’s treated this matter with integrity, he’s done everything asked of him, and he’s going to become a Tim Donaghy again.”