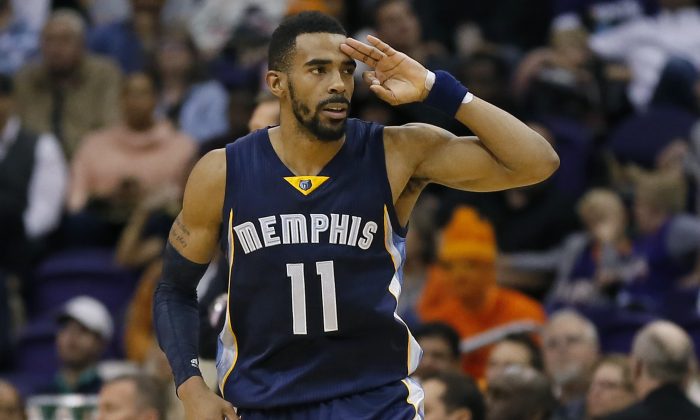 Memphis Grizzlies' Mike Conley (11) signals three after making a 3-pointer against the Phoenix Suns during the second half of an NBA basketball game, Monday, Feb. 2, 2015, in Phoenix. The Grizzlies won 102-101. (AP Photo/Matt York)
NBA

The newest NBA power rankings are out, counting games through February 3.

Sure the Hawks finally lost, but the Pelicans and Anthony Davis put on a performance that would have likely bested any team in the league. The Hawks will attempt to start a new winning streak against the Wizards on Wednesday night.

The Jeff Green deal has been the best trade in the league this season, with Memphis going 10-1 since Green was acquired. The forward has scored double figures in most of the games, and is also rebounding and passing well.

The Warriors surprisingly dropped a game to the re-energized Jazz, but are still blowing most teams out. The wins this week were 106-87 over the Suns and 121-96 over the Kings.

The Raptors took care of a string of weaker opponents, and also bested the Wizards, before dropping a close game to the Bucks. They’re now in second place in the Eastern Conference.

The Rockets took down the Mavericks and beat the Celtics but were upset by the Pistons, who have regained their streaking form. Dwight Howard will be out for a couple of weeks, at least, meaning others have to step up.

After a loss to the Rockets, the Mavericks took care of business by downing three weaker teams. Rajon Rondo will be out for at least another couple games, forcing J.J. Barea, Devin Harris, and even Raymond Felton into more action. All three have been playing well since Rondo went down.

The Cavaliers winning streak, which became the longest in the NBA after the Hawks loss, is now at 11 games. Second place in the East is in sight for Cleveland, thanks to slumps from the Raptors, Wizards, and Bulls. The Cavs have allowed less than 93 points per 100 possessions in the time that LeBron James and new addition Timofey Mozgov have shared the floor, noted NBA.com.

LaMarcus Aldridge gave the team a boost when he decided to delay thumb surgery, but despite his transcendent play (28.2 points, 11 rebounds over the last 5 games) the Blazers lost three games this week and barely beat the Jazz.

Injuries to Jabari Parker and Kendall Marshall, and Larry Sanders’ suspension, hasn’t slowed this team down. The Bucks are gaining more and more momentum, and took down the Blazers and the Raptors this week.

The Clippers routed the Spurs on the road but lost close games to the Pelicans and Nets. Only 2.5 games separate them from the seventh-seeded Spurs in the Western Conference.

The Spurs are quickly gaining ground in the West, and could nab a top four spot in the coming weeks, as coach Gregg Popovich discussed his and Tim Duncan’s retirement plans.

The Pelicans continued their odd tendency to lose to weaker teams (the Nuggets), while beating some of the teams with better records (Clippers and Hawks). Anthony Davis was unstoppable against the Hawks, recording 29 points and 13 rebounds, and playing terrific defense as usual.

With one of the worst records against teams over .500, questions about the Wizards being a serious contender won’t go away as fans push for a midseason trade to bolster the weak bench. The All-Star break should help Washington, which has most of its starters claiming to be banged up, including John Wall. Bradley Beal called the team “soft” after its most recent loss.

Another close loss–to the Grizzlies in the final minutes–has the Suns with the same number of losses as the Pelicans, with the Thunder also close behind. Could Phoenix try to pull off another trade before the deadline?

A scheduling quirk had the Bulls off for four days after back-to-back losses to the Lakers and Suns. A rough stretch of three back-to-backs is coming up, with opponents including the Pelicans, Cavs, and Pistons. The Bulls could find themselves in sixth place in the East if they’re not careful.

The Hornets took down the Wizards, and easily beat the Nuggets, but couldn’t handle the Spurs. Charlotte is 7-3 in its last 10, and has moved into seventh place in the East, despite losing Kemba Walker to injury. Al Jefferson has averaged 16 points, 10.4 rebounds, and 2.4 blocks in the last five games.

An inexplicable loss to the 76ers has sparked the Pistons, who took down the Rockets before stomping the Heat. Since Brandon Jennings went down with the season-ending injury, D.J. Augustin has scored at least 19 points in four of the five games, and is also averaging 9.2 assists.

The biggest news in Thunderland this week was the extension of role player Nick Collison, which earned praise from many players including Kevin Durant. Meanwhile, the team lost to the Knicks, and has seen the Pelicans blossom into a serious contender for the eighth seed in the West, decreasing its own chances of making the postseason even more.

With all the trade rumors, Brooklyn still hasn’t unloaded one of its overpaid stars. With Deron Williams finally returning from injury, the team nearly pulled off an upset over the Raptors–losing 127-122 in overtime–and did pull off a 102-11 upset over the Clippers. With all the struggles, the team is still only 1.5 games out of playoff position.

Hassan Whiteside is making a huge impact, but the problem is he can’t seem to stay on the floor for long enough to propel the team to wins. Miami dropped a game to the Mavericks despite Whiteside notching 16 points and 24 rebounds, and Whiteside complained that coach Erik Spoelstra didn’t let him play through foul trouble in the loss to the Pistons on Tuesday.

The Jazz are one of the young teams looking good lately, pushing the Clippers and Blazers and becoming one of only eight teams to beat the Warriors. Gordon Hayward had 26 points, 15 rebounds, and 6 assists that game.

A starting lineup change sparked a win over the Knicks, but it’s hard to see Boston making the playoffs even in the weaker East. The youth movement does show promise, including Marcus Smart, who played 37 minutes in the win.

Once among the undisputed worst teams in the league, Philadelphia is actually competing with almost every team it players–and winning some games. The Sixers knocked off the Pistons, Timberwolves, and Nuggets, and nearly beat the Hawks and Cavs.

After the first handful of games this season, Sacramento was in the playoff conversation. Similar to Denver, the Kings are not just trying to compete every night as they try to figure out what went wrong. Bad highlights of DeMarcus Cousins keep adding up.

Seriously, this is why coaches don’t give you All-Star votes when you’re averaging 24 &12. https://t.co/wTP5QOOyzs

The Knicks are improving, but still mostly looking to next season. Phil Jackson revealed this week that he will likely target multiple second-tier free agents (such as Tobias Harris, Paul Millsap, and Reggie Jackson) as opposed to top free agents such as Aldridge and Marc Gasol.

Paul George could be back this season. The news could be enough to spark a run by the Pacers, one of the top Eastern Conference teams last season.

The Nuggets started off the week strong by beating the Pelicans but promptly reverted and lost the other three games, including one to Philly that seemed to be over by halftime. The biggest question about Denver is now who will be traded, with prime candidates including Wilson Chandler and Ty Lawson.

In the wake of Kobe Bryant’s injury, the team is staying competitive, even knocking off the Bulls in overtime this week. But fans and analysts are increasingly looking to next season, when the team should get a top prospect to team up with Kobe and Julius Randle, and whatever free agents the Lakers can lure.

The young team continues to play hard but is still on track for a top pick in the next draft. Ricky Rubio’s return did nearly boost the team to a win over the Mavericks, and the crafty point guard should enable the team to grab a few more wins this season.

The Magic are on a dreadful nine-game losing streak, and the bigger problem is the lack of competitiveness in most of the losses. A growing number of reports say coach Jacque Vaughn is out sooner than later.