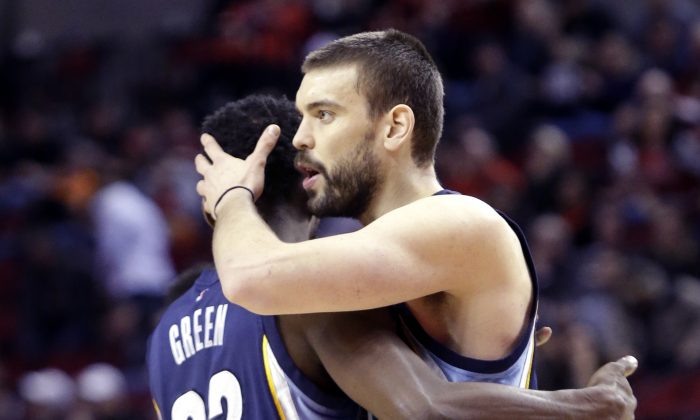 The newest set of NBA power rankings are here, with the two hottest teams in the league–the Grizzlies and Cavs–on top.

The Grizzlies have made up serious ground on the Warriors since acquiring Jeff Green, while the Cavs are rising quick in the Eastern Conference, figuring to get the No. 2 seed when all is said and done.

The Warriors are still winning a lot, just not as much, while the Hawks have been slumping lately.

Check out the full rankings below.

Since acquiring Green, Memphis has gone 15-3 and gained a little ground on the Warriors for the No. 1 seed. They’re now 3.5 games back. If Stephen Curry had been out for longer, the race would have tightened even more. More importantly, Memphis is 3.5 games ahead of Houston and has basically secured homecourt advantage for the first and second rounds of the playoffs.

The Cavs picked up a nice rotation piece in Kendrick Perkins–beating out the Clippers–and Kevin Love had one of his best games in Cleveland against the Pistons, absolutely decimating Detroit with his 3-point range. Cleveland should be in second place in the East by mid-March.

Fortunately, Curry’s injury wasn’t serious and he returned to help Golden State beat the Wizards in a narrow road win. Without their star guard, the Warriors dropped a road game to the Pacers. The Warriors are hoping that the Thunder stay hot and the Spurs stay cold, avoiding a first-round showdown with OKC.

The Hawks have come back to Earth after their incredible win streak, but are still playing some of the best basketball in the East despite an ugly loss to the Raptors and a narrow loss to the Celtics. Atlanta is 7.5 games ahead of Toronto and should get the No. 1 seed; the big question is–who will they face in the first-round? Some of the options are primed for an upset, particularly the Pistons and Pacers.

Houston isn’t doing so great without Dwight Howard, although the Rockets have managed to stay in the top four in the tough West. Houston is on course to take the most 3-pointers over one season in NBA history, but coach Kevin McHale wants them to focus more on scoring in the paint after going 26 percent from long range in the past four games.

Rajon Rondo and coach Rick Carlisle may have blown up at each other during the Mavs win over Toronto on Tuesday, but the team has to be pleased with its three-game win streak–including two wins without starting small forward Chandler Parsons. Sporting a 13-0 road record against the Eastern Conference, the Mavs visit Atlanta on Wednesday.

Russell Westbrook is powering Oklahoma City into the playoffs, while boosting his profile for a potential MVP bid. The Thunder not only face decreased competition from the Pelicans (with Anthony Davis and others injured) and Suns (following the trades), but could overtake the struggling Spurs for the seventh seed. That would possibly match them up with the Grizzlies in the first round.

Two losses for the Blazers after the All-Star break, including a bad one to the Jazz. Portland can’t lose too many or will fall out of homecourt advantage in the first round. The Blazers are 23-6 at home and 13-13 on the road so far this season.

The Raptors offense carries them to wins on some nights but on others spells their demise. In three straight losses the team is shooting horribly. Emblematic of the struggles is Kyle Lowry, who shot 2-13 against the Rockets, 8-19 against the Hornets, and 4-15 against the Mavericks. “We are a jump shooting team, a pick and roll, jump shooting team,” coach Dwane Casey acknowledged before the last loss.

Devastating news for Chicago that Derrick Rose is injured yet again. The team has done well without him over the past few seasons, but not in the playoffs. Early reports indicate that he could possibly return in time for them this season. Either way, the Bulls will need to sign another point guard to help Kirk Hinrich and Aaron Brooks fill the void.

The Bucks have lost two games coming out of the break but remain one of the biggest surprises in the NBA, about to jump into fifth place in the East. The trade for Michael Carter Williams left many shocked. The former Sixers guard will play for Milwaukee for the first time on Wednesday against … the Sixers.

Despite losing Blake Griffin to injury, L.A. has rolled through quality opponents following a brutal loss to the Thunder. DeAndre Jordan exploded in wins over the Mavericks, Rockets, and Spurs, putting up at least 20 points and 18 rebounds in each game. Jordan will be one of the biggest free agents this offseason, if he decides to explore his options.

Tony Parker isn’t the only one struggling for San Antonio, which is in danger of slipping to eighth place in the West. “Can you point to anybody who is doing well?” Manu Ginobili said. “He’s struggling like the rest of us are struggling. It’s an ‘us’ thing. We as a team have to get it together.” The three-game losing streak includes a loss to the Jazz and a blowout against the Warriors.

Washington is grappling with serious issues with starting shooting guard Bradley Beal’s injury exposing their lack of outside shooting besides him. In the six games that Beal has missed recently, the Wizards have only converted 33 of 117 three-point attempts–a 28 percent figure that would place them as the worst 3-point shooting team in the league. Washington has dropped eight of its last 10 games.

The Pelicans are putting up valiant efforts without Davis, Ryan Anderson, and Jrue Holiday, going 2-1 since the All-Star break after a three-game losing streak going into it. Still, with Oklahoma City’s explosion, the playoffs are looking less and less likely.

Missing out on Reggie Jackson was bad but nabbing Thaddeus Young for Kevin Garnett was one of the best moves at the trade deadline, and sets the Nets as one of the favorites for the last two playoff spots in the East. Brooklyn is finding success in the same place they did last season–small ball, with Joe Johnson, instead of Paul Pierce, at power forward. Young also provides a stretch four option, although he can’t shoot threes that well.

Goran Dragic was the best player moved at the deadline, but just hours after celebrating his addition Miami had to deal with the news of Chris Bosh missing the rest of the season. Miami, considered a lock for the postseason immediately after the trade, now must vie with the likes of Brooklyn, Detroit, and Indiana for the last two spots.

Acquiring Jackson at the deadline was just the latest strong move for Stan Van Gundy, who is utilizing his dual coach-GM role much better than Doc Rivers. Van Gundy also picked up Tayshaun Prince–who played great defense against the Cavs on Tuesday–and also nabbed Shawne Williams, another power forward that can shoot the three (to go with previous pick-up Anthony Tolliver) off waivers.

The Pacers gritted out a win over the Curry-less Warriors but couldn’t overcome the Thunder and Westbrook. Still, Indiana is only 1.5 games back from the eighth seed, and Paul George could come back this season. If he does, even before it happens it will provide a boost to the team, which was the No. 1 seed last season.

Utah has won some impressive games lately, including over the Pelicans, Trail Blazers, and Spurs. The Jazz dealt Enes Kanter away, but that move opens up more playing time for Derrick Favors and Rudy Gobert, who are one one of the best young big men tandems in the league.

Phoenix, in many eyes, gave up the fight for the eighth seed when dealing away both Dragic and Isaiah Thomas. The Suns did get several pieces back, primarily Brandon Knight, but have fallen three games back from OKC, and are on a five-game losing streak. Thomas and Boston inflicted one of the losses.

The Hornets, still only a game outside the eighth seed despite losing five straight, are trying to hang on until Kemba Walker gets back. Lance Stephenson is still underwhelming at best, and Mo Williams is producing but is not Walker.

Thomas was a great pick-up and should be the Celtics starting point guard or sixth man for years to come if the first couple games indicate anything. Coach Brad Stevens is giving the guard free reign to terrorize opposing teams in the pick-and-roll, and Thomas led the Celtics to a win over the Suns. Boston still has an outside shot at the playoffs.

Orlando is salvaging a rough season by picking up their defense under interim coach James Borrego. The 4-2 record under Borrego is mostly due to the Magic holding their opponents to 92.7 points on average, although the wins came over the Knicks, Lakers, Pelicans, and Sixers.

George Karl has been testing different bench lineups to try to shore up what has so far been one of the worst benches in the league. “Finding the personality off the bench is going to have some inconsistency because, one, I’m not even sure they know who’s going to play because I don’t know who’s going to play,” Karl said. The players have been enjoying Karl’s offensive system, which emphasizes spacing and cutting.

The Kevin Garnett pick-up was the right move despite a slew of detractors. Garnett and the Timberwolves are reportedly discussing a new two-year contract after this season, which would enable the superstar to mentor the young core in the locker room before transitioning to a management position. Garnett wants to buy the team eventually.

There’s always some bad news for this season’s Lakers. The team got a W over rival Boston but coach Byron Scott and injured star Kobe Bryant were upset with how some players celebrated afterwards. “If you’re doing something that isn’t very well done,” Bryant told Jimmy Kimmel, expressing his frustration. “I’m not going to say it’s very well done.”

The Sixers did move Michael Carter Williams and K.J. McDaniels but do still have a number of promising young players who are winning some games after the dismal start to the season. Philadelphia was competitive in the latest loss against Miami but ultimately fell by 9 points.

Denver is one of the few teams that has managed to not be competitive in many of its games, and also isn’t much fun to watch even when they are. Denver, which had hopes for the playoffs early in the season, is now giving its younger players more time, such as recent signee Joffrey Lauvergne.

Much has been made of Langston Galloway and some other bright spots on New York, but the fact remains that the Knicks are 0-15 without Carmelo Anthony–who is now out for the rest of the season. It’s difficult to envision wins when looking at the Knicks schedule, but they do play the Nuggets on March 9.