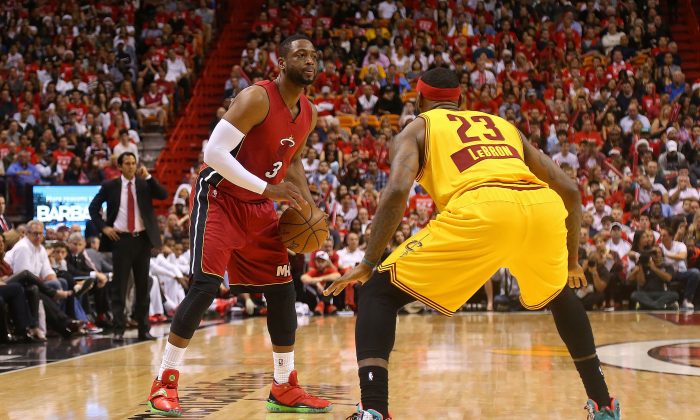 Dwyane Wade of the Miami Heat posts up LeBron James of the Cleveland Cavaliers during a game at American Airlines Arena on December 25, 2014 in Miami, Florida. Could LeBron and his former team meet in the playoffs? (Photo by Mike Ehrmann/Getty Images)
NBA

The NBA playoffs are quickly getting closer as the season winds down, with more and more attention being paid to potential first-round playoff matchups.

A host of matchups are possible right now for the first round with all the jockeying going on.

Check out the most intriguing potential matchups below.

A Cleveland–Miami matchup in the first round looks like the most exciting potential matchup, especially considering Miami could actually win with the addition of Dragic and the experience of the Heat core.

The series would suffer from the lack of Chris Bosh, who was recently declared out for the season, but would still be a lot of fun. The Cavs finally acquired a true center, Timofey Mozgov, to replace Anderson Varejao but Whiteside is better right now and would cause problems for Miami. Dragic against Kyrie Irving would be a great matchup, as would James against his replacement Luol Deng.

The Cavs would most likely win, but the series could easily stretch to seven games.

Brooklyn is looking hot following the All-Star break. Thaddeus Young gives them an injection of youth along with the continued emergence of Mason Plumlee and the stunning promotion of Markel Brown, who barely played in the first half of the season.

Deron Williams and Brook Lopez are producing in bench roles, and the Nets still have the Raptors’ nightmare—Joe Johnson. The Raptors could make a deep run in the postseason, building on last season’s strong regular season with more growth from Kyle Lowry, DeMar DeRozan, and the rest of the crew. Lou Williams figures to win at least one game by himself, although he’s played horribly in his past playoff appearances.

Neither team would be the favorite in this series; expect it to go to seven games and to the last second, as the last one did.

Here’s to predicting Milwaukee not only completes its rise over the Wizards, who can’t stop losing, but also overtakes the Derrick Rose-less Bulls to nab home-court advantage in the first round.

The Bucks are one of the most exciting teams in the East, with their bevy of athletic, long-armed players who enjoy playing defense and dunking. They may have gotten even better by adding Michael Carter-Williams, since Jason Kidd will definitely boost the young guard.

Chicago faces some of the most pressure in the conference despite losing Rose for an extended period. Whether he can come back for the playoffs or not, the Bulls need to advance to at least the second round or coach Tom Thibodeau could easily find himself on the market in the offseason.

Milwaukee is the favorite in this series since everyone outside Chicago wants to see them try to upset Atlanta or Cleveland in the second round. By the way, a Bulls–Wizards rematch would be intriguing, but Washington is playing so bad right now that they don’t deserve a spot on this list.

A storyline that will get bigger as the draft approaches later this year, particularly if the Nets miss the playoffs: Atlanta having the ability to swap first-round picks with Brooklyn from the infamous Joe Johnson trade.

The only bright side to this? The hope that Johnson uses the trade as motivation to torch his former team and lead Brooklyn to a stunning first-round win. Brooklyn would get immense satisfaction in sending Atlanta home.

Atlanta, meanwhile, has had a phenomenal regular season but has to prove that it can win in the playoffs before more people take them as a serious contender.

The Hawks are the favorites, but the series would likely go to at least six games, with Johnson averaging 25 points a game.

Only two teams will get the seventh and eighth seeds, with six teams currently vying for them. If the Pacers sneak past the others into the seventh seed, then a rematch with Paul George’s nemesis LeBron awaits.

George joined in a full practice for the first time this season on Thursday, and tentatively plans on playing his first game in mid-March. Indiana is only one game behind Brooklyn for the eighth seed and 2.5 games behind Miami for the seventh seed.

Sure, Cleveland against Indiana isn’t the most compelling series, but it beats many of the alternatives. It would be the fourth straight year that LeBron and the Pacers faced off in the playoffs. James has won three times straight, but George and Indiana would be extra motivated with his recent return from injury.

Cleveland would likely win in five or six games, though.

Okay, so the Wizards do get the last spot. But only because seeing a Pierce-led team—and Pierce will undoubtedly be one if not the leader of the team in the playoffs—beat the Raptors again would be very, very interesting.

Washington hopefully gets back to playing semi-exciting basketball when Pierce gets healthy and Bradley Beal returns from injury, focusing on getting fast-break buckets and making sure Nene and Marcin Gortat get fed. Toronto would have its hands full containing the Wizards’ rotation of big men, while the Wizards traded Andre Miller for Ramon Sessions with matchups against Lou Williams and Aaron Brooks in mind.

John Wall against Kyle Lowry would be a great matchup of young guards, while Pierce against whoever guards him would also be fun to watch.

If the Wizards can get back to playing the way they were, Washington wins in six games. If not, Toronto wins in five games.