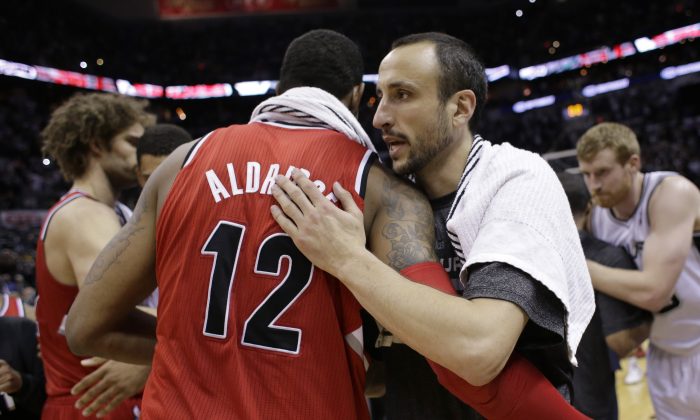 The NBA playoff bracket and picture is clearer after the second round wrapped up on Thursday night.

The Miami Heat and San Antonio Spurs–the teams that made the NBA finals last year–both completed their second round series and claimed a spot in the respective conference finals.

The Indiana Pacers and Oklahoma City Thunder wrapped up their series a day later.

Now it’s the Heat vs Pacers and Spurs vs Thunder in the conference finals.

The Eastern Conference finals will start on Sunday afternoon at 3:30 p.m. in Indiana.

The Western Conference finals will start at 8 p.m. CDT on Monday night in San Antonio.

See an Associated Press article about the Wizards-Pacers game below.

WASHINGTON—For all their mysterious slumps and chemistry curiosities, the Indiana Pacers are back where they were last season — in the Eastern Conference finals.

David West scored 29 points Thursday night, and the Pacers blew a 16-point second-half lead before pulling away late in a 93-80 win that ousted the Washington Wizards in six games.

Next up, a rematch with the Miami Heat.

Lance Stephenson added 17 points and eight assists for the Pacers, who earned a Game 1 at home against the two-time defending NBA champions on Sunday. Indiana took Miami to seven games in the conference finals a year ago.

Marcin Gortat scored 19 points, and John Wall had 12 points and nine assists for the Wizards, who ended their best playoff run in decades. Washington won a playoff series for the first time since 2005 and a second-round game for the first time since 1982. But the team was ultimately undone by an inability to win at home, going just 1-4 at the Verizon Center and 5-1 on the road in the playoffs.

The Wizards appeared to have a fix on the home-court demons when Bradley Beal stole a rebound from Roy Hibbert, then hit a 3-pointer at the other end to put the Wizards up 74-73 with 8½ minutes to play.

But that was Washington’s only lead of the second half. West answered with a pair of jumpers, including a tough fade-away, and Stephenson added a layup to start a decisive 20-6 run that included threeWizards turnovers in four possessions. Washington went five minutes without a point and scored only two field goals after Beal’s go-ahead 3.

The Pacers were 46-13 on March 2 before limping to the finish line, barely holding on to the conference’s No. 1 seed. Things didn’t look much better when Indy was pushed to seven games in the first round by eighth-seeded Atlanta, or when the Pacers lost Game 1 at home to the Wizards.

But Hibbert revived himself in Game 2, the defense held the Wizards to 63 points in Game 3, and Paul George went off for 39 points in Game 4. The ugly Pacers returned in a 23-point beatdown at home in Game 5.

But they pulled ahead early in the clincher by shooting 59 percent in the first half and holding the up-tempo Wizards without a fast-break point until the second half.

The Wizards had to reschedule a Lady Gaga concert to host the game, upsetting the singer’s fans and prompting an apology from team owner Ted Leonsis. Instead of Little Monsters in the arena, there were big ones — such as a 4½-minute field goal drought in the second period that helped the Pacers to a 52-40 halftime lead.

Wall, who broke out of a shooting and leadership slump in Game 5, had moments that were more reckless than sublime in the first half. He was 2 for 6 from the field at the break, while Beal was 3 for 10. The Wizards were 1 for 7 from 3-point range, and only the inside presence of Nene and Gortat kept it close.

The Pacers got the lead to 16, but the Wizards answered with an 11-2 run capped by Wall’s 1-on-3 transition layup, Washington’s first fast-break basket. Wall was particularly assertive at the start of the fourth quarter, but the Pacers’ defense held firm when it mattered.