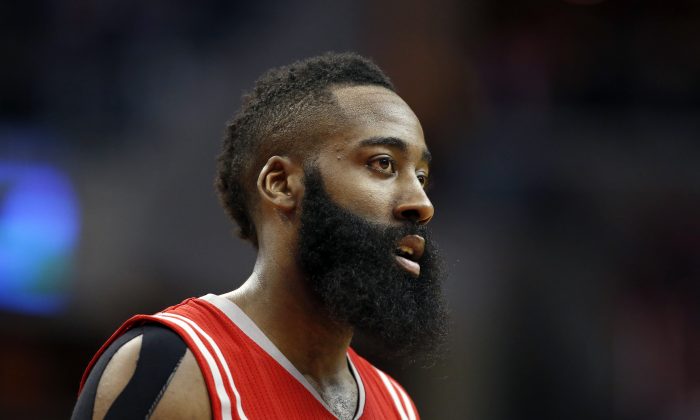 Houston Rockets guard James Harden (13) pause on the court in the second half of an NBA basketball game against the Washington Wizards, Sunday, March 29, 2015, in Washington. The Rockets won 99-91. (AP Photo/Alex Brandon)
NBA

The NBA playoff picture has changed significantly over the past few weeks, and things are starting to get clearer.

The New Orleans Pelicans nabbed a playoff spot in the tough Western Conference, but not for long. And now the Oklahoma City Thunder looks like they’ve claimed the eighth spot for good, 2.5 games ahead of the Pelicans.

The Dallas Mavericks keep struggling but should be able to hold off the Thunder and keep the seventh spot. Their matchup is still up in the air because the Houston Rockets passed the Memphis Grizzlies for second place on Sunday night. The middle of the West is a jumble, with only three games separating the Rockets and sixth place San Antonio Spurs. If the season ended today, some compelling matchups would await–including Houston vs Dallas, with Chandler Parsons facing his former team; and the Grizzlies vs the Spurs.

Over in the East, the big battle is for the last three playoff spots. The Milwaukee Bucks are trying their hardest to hold on to the sixth spot, though they are just two games ahead of the Miami Heat and 3.5 games behind the Brooklyn Nets.

Brooklyn has reemerged lately and, thanks to a three-game winning streak, are half-a-game ahead of the Boston Celtics and Indiana Pacers. The Charlotte Hornets are another half-a-game back.

The top of the East looks settled, with the Atlanta Hawks maintaining their hold on first place and the Cleveland Cavaliers creating separation for second place. A Brooklyn matchup with Atlanta would be interesting, with Joe Johnson facing his former team and the fact that the Nets are going to get their first-round pick swapped for the less favorable Atlanta pick in the upcoming draft. Another big matchup would be the Cavaliers against the Heat, with LeBron James facing his former team.

As things stand now, the Chicago Bulls have third place wrapped up, meaning the Toronto Raptors and Washington Wizards will face off as the four and five seeds.