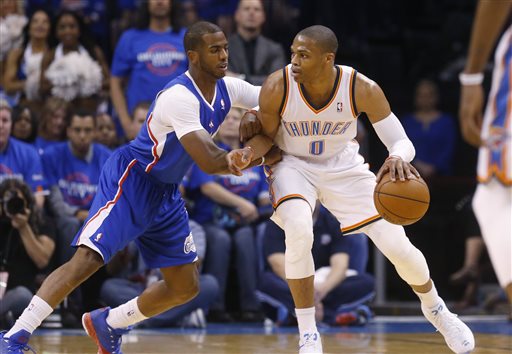 The updated NBA playoff picture has all two upsets in the making.

The Washington Wizards are on top in their series against the Indiana Pacers, as are the Los Angeles Clippers against the Oklahoma City Thunder.

Game 2s in both series are scheduled tonight, May 7. The Wizards-Pacers starts at 7 p.m. EDT while the Clippers-Thunder will tip-off at approximately 9:30 p.m.

See the full schedule, including TV channels, below. Games that are broadcast on TNT can be livestreamed through TNT, and the same with ESPN. See a preview of the Clippers-Thunder game below the schedule.

See an Associated Press preview of the Clippers-Thunder game 2 below.

OKLAHOMA CITY—Chris Paul is usually about assists — he led the league in that category this season, and his popular television commercials focus on them.

He helped his team in a surprisingly different way Monday night in Game 1 of the Western Conference semifinals. The point guard made eight 3-pointers against the Oklahoma City Thunder — three more than he had ever made in an NBA game — to help the Clippers win 122-105.

Paul, who only missed one 3-pointer and finished with 32 points, said fans should not expect a similar explosion in Game 2 on Wednesday night.

“The next game, I might have 12 points, 10 points, maybe not even that many,” he said Tuesday. “I think I’m one of those people — whatever it takes to win. I don’t care. I’m never going to lead the league in scoring or anything like that. It’s just whatever to try to win.”

Paul, who finished seventh in the MVP voting despite missing nearly one-quarter of the season with a shoulder injury, has been a capable scorer throughout his career. He averaged 19.1 points this season, and has averaged 18.6 points over his nine NBA seasons. Clippers forward Blake Griffin believes Paul could be even more of a scorer.

“A night like last night shows what he can do offensively,” Griffin said. “There’s dialogue sometimes for him to get more aggressive like he was last night because he can do that almost every game. We tell him to be aggressive, but his whole thing is getting other guys the ball.”

Paul’s shooting leaves the Thunder with an unexpected problem. The Clippers have plenty of offensive weapons — Griffin, who finished third in the MVP balloting, and Jamal Crawford, the league’s Sixth Man of the Year, immediately come to mind. Add perimeter players Matt Barnes, J.J. Redick and Darren Collison, the inside game of DeAndre Jordan and Paul as a more assertive threat from the outside, and the Clippers might be more dangerous than the team that led the NBA in scoring during the regular season.

“When he’s hitting 3s like that, it’s tough,” Thunder forward Nick Collison said of Paul. “We can definitely make it more difficult on him than we did (Monday). I think that’s where our focus is going to be, is how can we defend better?”

Paul scored 17 points and made five 3-pointers in the final 6:21 of the first quarter in Game 1, matching his career high for 3-pointers in a game in the first 12 minutes. By the end of the barrage, the Clippers had turned a 16-13 deficit into a 39-25 lead.

“When a guy hits five or six 3s in a row, you don’t want to give him some more, and that is when they started to get some stuff in the paint,” said Thunder forward Kevin Durant, who was named MVP on Tuesday.

“The effort was there,” Durant said. “We had good intentions, but they got hot. We have got to correct it. We have to make them miss next game and be a little bit more physical.”

“It wasn’t like I was making unbelievable shots, it was because the court was open,” he said. “When I had two defenders I gave it to Blake, and that’s what put so much pressure on the defense because BG (Griffin) is such a great passer.”

“The ball didn’t stick,” he said. “The ball moved. Everything was quick. Quick decisions, quick drives, quick shots. There was not a lot of hesitation. If we play like that, we’ll be good.”

Though it was a good start, the Clippers say there’s a long way to go if they are to reach the Western Conference finals for the first time.

“You don’t read too much into it because it’s still Game 1 of the series,” Rivers said. “With us, I don’t think you can get too high or too low. You’ve just got to keep coming out and playing. You might get those same shots tomorrow and they not go in.”