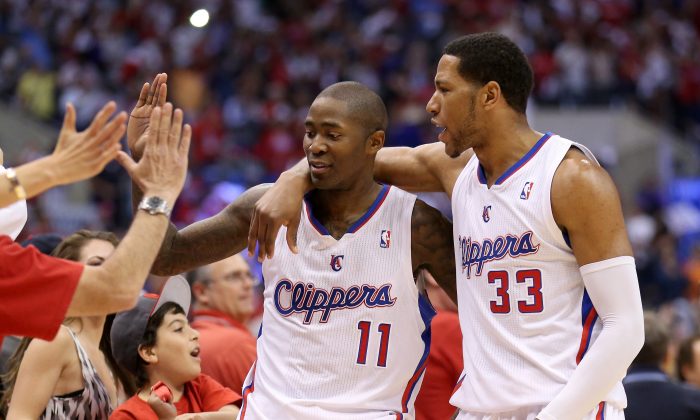 Jamal Crawford #11 and Danny Granger #33 of the Los Angeles Clippers celebrate the fans after defeating the Oklahoma City Thunder in Game Four of the Western Conference Semifinals during the 2014 NBA Playoffs at Staples Center on May 11, 2014 in Los Angeles, California. The Clippers won 101-99. (Stephen Dunn/Getty Images)
NBA

The NBA playoff picture got a little bit clearer after the Spurs took a commanding 3-0 lead over the Blazers this weekend.

That series is basically over, meaning the Spurs will advance to the Western Conference finals.

On the other hand, the Clippers stunned the Thunder by coming back from 22 down and winning by a bucket on Sunday afternoon, leaving the series tied 2-2. Whichever team makes it out of that series could easily beat the Spurs as both teams have shown how good they can be. (Prediction: Clippers in 7, then Clippers in 7 in the finals).

In the Eastern Conference, the Nets carved out a nice win at home to bring the series against the Heat to 1-2. The Nets need another win on Monday to have a chance at winning the series but are at least back in it and have some confidence now. (Prediction: Nets in 7).

The other series in the East had the Pacers go up 2-1 against the Wizards, who played a horrible game. The Wizards need a win at home on Sunday night (game info) to even the series as it shifts back to Indiana. (Prediction: Wizards in 6).

Most NBA fans outside of Miami and San Antonio likely want to see a final with at least one different team from last year. That’s entirely possible since the Clippers or Thunder have a good shot at beating the Spurs, while any of the three teams left in the East could beat the Heat.

Check out the bracket below and the TV schedule below that.

See an article from the Associated Press below.

Nets try to back up belief by beating Heat again

NEW YORK—Paul Pierce called the Miami Heat a juggernaut. He insisted they are still the team to beat.

So yes, the Brooklyn Nets have plenty of respect for the two-time defending NBA champions — and no fear.

Pierce made that clear again Sunday, a day after the Nets’ Game 3 rout that cut Miami’s lead to 2-1 in the Eastern Conference semifinals. Brooklyn will try to even the series at home Monday night.

“You’ve got to have that type of mental ego against a juggernaut. You go against the best, a lot of series are won on fear factor, like, or non-belief. When you have that non-belief, then you have no chance,” Pierce said after practice.

“What I try to do in this locker room, or with my teammates, is just try to give them belief that we can beat this team. They’re not unbeatable.”

The Heat had been in these playoffs until the Nets’ 104-90 victory on Saturday night. Miami hadn’t even faced a fourth-quarter deficit, but was out of the game long before then after Brooklyn dominated the third quarter to build a huge lead.

“The defeat was complete,” Heat coach Erik Spoelstra said. “It was both sides of the basketball.

“It was like trying to plug in holes in a leaking dam. There was so many things that were not in our favor really on both ends of the court.”

The Nets made 15 of 25 3-point attempts, outrebounded Miami 43-27, and limited LeBron James to two baskets over the final three quarters after he had 16 points on 6-of-7 shooting in the first.

Brooklyn swept the regular-season series, though none of the games was anywhere near as easy as Game 3. Yet the four victories gave the Nets a confidence against the Heat that some other opponents may not have.

“We just had a little success against them during the regular season. We played them well and we feel like we match up well with them,” Nets guard Deron Williams said. “And if we’re on top of our game, we’re playing defense the way we’re capable of playing, like we did the last game, we put ourselves in a good position to win.”

Pierce did his part after the Nets were routed in Game 1, asking coach Jason Kidd to switch up the defense so he could guard James. And after he and the Nets did such a good job of it over the final three quarters of Game 3, Pierce said the Nets wanted to show the Heat that they weren’t scared of them.

“We’ve never been a team that talks. We don’t get into that, and we’ve never been a bulletin board team. We just want to play the game the right way and we give ourselves a good chance to win if we play our type of basketball and last night we didn’t do that.”

Miami had won its previous eight postseason games and followed every loss with a victory last year. To do that in this series, Spoelstra said the Heat would not only need better effort and urgency, but also more attention to the little details.

Pierce is expecting that, as well as in Game 5 back in Miami on Wednesday night. Even though the Heat didn’t look it Saturday, he believes they are just as good as the recent versions that ended his seasons in Boston.

“Definitely. They’re well-seasoned now. They know how to win,” Pierce said. “They’ve won two championships, there’s nothing they haven’t been through. So the one thing you always hear, it’s kind of a cliche, is never underestimate the heart of a champion, and you know that’s what they have under their belts. So you know, they’re the team to beat.”