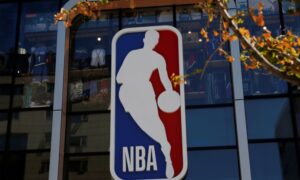 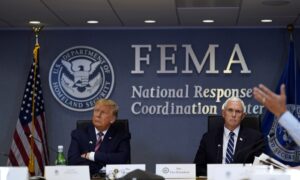 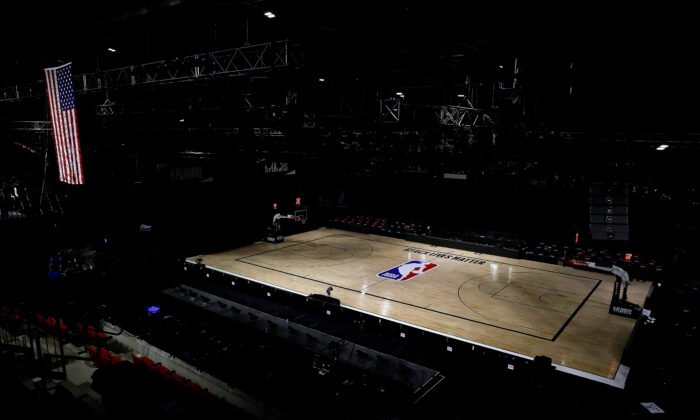 An empty arena is seen as all NBA playoff games were postponed today during the 2020 NBA Playoffs at ESPN Wide World Of Sports Complex in Lake Buena Vista, Fla., on Aug. 27, 2020. (Kevin C. Cox/Getty Images)
NBA

NBA games will resume on Saturday, the league and its player’s union announced Friday.

Games were called off Wednesday after the Milwaukee Bucks refused to take to the court. Since then, no games have been played.

Players said they were upset about the police shooting of Jacob Blake, a 29-year-old man wanted for sexual assault who was shot after resisting arrest in Kenosha, Wisconsin, on Sunday.

League stakeholders discussed how to take additional steps in the quest for so-called social justice and racial equity.

The NBA and its players agreed to immediately establish a coalition to focus on issues including boosting access to voting and advocating “for meaningful police and criminal justice reform,” the statement said.

Newly created advertising spots dedicated to promoting civic engagement in both national and local elections will run during the games.

In addition, in every city the league franchise owns and controls an arena, the team’s governors will keep working with local elections officials to utilize the arenas as an in-person voting option for the Nov. 3 presidential election.

That effort was originally announced on Aug. 14 by the Election Super Centers Project, described as a nonpartisan project that was helping teams, arena owners, and arena operators work with officials to open large venues as polling sites.

At the time, NBA teams including the Los Angeles Clippers, the Bucks, and the Dallas Mavericks were listed as working to open their arenas as voting spots.

“Our mission is not only to help large-scale venues offer thousands, even millions, of voters greater poll access this year but to ensure that their voting experience meets the highest standards of safety, security, and election integrity,” Eugene Jarecki, a filmmaker who is co-chairing the project, said in a statement.

While the project claimed to be nonpartisan, Jarecki has a number of tweets denigrating President Donald Trump.

The president, a Republican, is vying against Democratic presidential nominee Joe Biden.