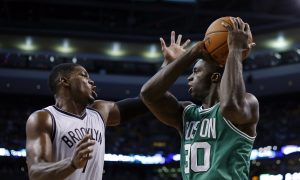 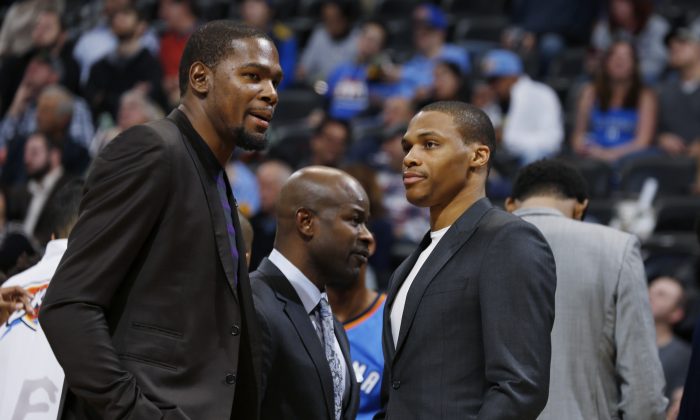 Injured Oklahoma City Thunder forward Kevin Durant, left, confers with injured guard Russell Westbrook during a timeout against the Denver Nuggets in the third quarter of the Nuggets' 107-100 victory in an NBA basketball game in Denver on Wednesday, Nov. 19, 2014. (AP Photo/David Zalubowski)
NBA

The NBA has lots of action on Friday night after an off-day on Thursday, and the news and rumors are ramping up.

Russell Westbrook finally gets to put his fashionable suit collection away.

Thunder coach Scott Brooks said after Friday’s shootaround that his ultra-athletic point guard will return to action Friday night and start against the New York Knicks.

Westbrook, a three-time All-Star, broke a bone in his right hand against the Los Angeles Clippers in the second game of the season, and he hasn’t played since. He was reevaluated this week and finally was cleared to play.

“I’m just excited to get back to my game routine,” he said. “Go home, take my nap — normal things I usually do to get myself prepared for a game. You kind of miss all that stuff when you’re sitting on the sideline in a suit. I’m about to take all my suits to the cleaners and pick them up at the end of the season.”

Westbrook averaged 26.7 points, 7.3 rebounds and 8.1 assists in 19 playoff games last season. He was expected to pick up the slack after MVP Kevin Durant broke a bone in his right foot before the season began. Westbrook opened the season with a 38-point effort at Portland before getting hurt against the Los Angeles Clippers. Without the pair, the Thunder won just four of their first 16 games.

Even as the losses piled up, Westbrook felt the team showed determination. The Thunder entered Friday’s action fourth in the league in defensive field-goal percentage and fourth in points allowed.

“They compete,” Westbrook said. “We’ve got a group of guys that compete every night. Regardless of whether we win or lose, we know our guys came out and gave it all we had. They compete. That’s the best thing about our team.”

Westbrook will wear a brace on the hand.

Reggie Jackson, who filled in and averages 20.2 points and 7.8 assists, will return to his backup role. Durant is still unavailable, but at least Brooks has one of his stars.

“Russell has great passion for the game,” Brooks said. “He’s been a great, tremendous leader for us. He brings toughness, the emotional part, what it takes for a team to be successful. He’s obviously one of the best players in the league, so we’re all excited to have him back.”

Pacers Get Players Back

Injured players are also returning for the Indiana Pacers.

Paul George is still out and will be for a while longer–possibly the whole season–and George Hill won’t return yet, but C.J. Watson and David West are expected to make their debuts on Friday night.

The Pacers have been competing even without the four players, staying close in many games and winning 6 out of 15.

In the Eastern Conference, that’s good enough for 9th place, just 0.5 games outside of the playoff positioning.

To make room for the players, the Pacers waived A.J. Price, despite the guard averaging 10.5 points and 2.7 assists over 10 games. The Pacers were 5-5 with Price in uniform, and 1-4 without him.

Hill is expected back in mid-December.

Anthony Davis indicated in a new interview that he plans to stay in New Orleans.

Davis said the Pelicans, who are in playoff contention, are on the “right path.”

“We know what we got in this locker room,” he told Yahoo. “We know what direction we want to go in and our identity to be.”

Davis, 21, will make $7 million next year in the final year of his rookie contract.

He’s eligible for an extension next summer that could be worth about $90 million over five years. If the extension isn’t signed he’d be a restricted free agent in July 2016.

But Davis indicated that he’d like to stay where he is now.

“Great city. Great atmosphere. …We’re getting the fans back and New Orleans back buzzing for the Pelicans, a great organization. I love my team here,” he said.

“We’re definitely moving in the right direction. I don’t know what the future holds, but right now I’m definitely loving the team and the organization.”

Meanwhile, coach Monty Williams gathered his players this week for a meeting, and told them he wants Davis to take at least 20 shots a game.

Davis had 12 shots and 14 points in the 99-89 loss to the Sacramento Kings on Tuesday night.

”Anthony cannot be in a game and not touch the ball,” Williams told The Times Picayune after his meeting with players.

”We have to have an effort to get him at least 20 shots every night. ”And that’s on me too. As much as I draw up plays for him, run the offense through him, the guys on the floor has to know it. When they don’t do it, I’ve got to make sure they get him the ball. Because he’s not a selfish player, he’s going to make the right plays. And our guys know that.”