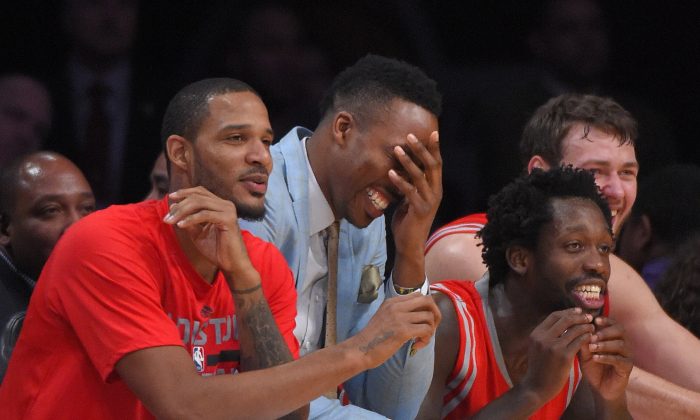 Some major NBA players are dealing with injuries, including Dwight Howard, Kobe Bryant, and Dwyane Wade.

Bryant underwent shoulder surgery on Wednesday, and revealed a night later that he is not going to retire just yet.

He was asked by ESPN if he’ll be ready to play in September, when the Los Angeles Lakers are slated to start training camp for next season.

“Yeah, that’s the plan,” he responded. He noted that his rehab will involve patience, and that his shoulder is “sore but OK.”

“They said he has some swelling on his knee and he was going to check with more people today, and we’ll probably get a better update when all the doctors get together in a day or two,” he told NBA.com.

“But he’s not doing anything at all for a few days.”

McHale added that he doesn’t expect Howard to be available “for a while.”

The Rockets previously said that an MRI revealed edema in Howard’s right knee, and that he would be evaluated further in the coming days.

Another big injury is to Wade of the Miami Heat. Wade called a news conference on Thursday, telling reporters: “I won’t be seeing y’all for a little while, so take a good look at this face.”

Wade strained his hamstring on Tuesday night, and said that the best case scenario is for him to return in two to three weeks.

“You can’t put a time on it,” Wade said. “You can’t look at the hamstring and say you’re going to be out this amount of games. Like many muscle strains, you’ve got to go day-by-day.”

Wade had already suffered two leg injuries this season, and has missed 10 of the Heat’s 45 games so far.

Wade, who will likely miss the All-Star game, noted that he’s “frustrated.”

“I know our fans are very frustrated,” he said. “I just want them to know that they aren’t more frustrated than us.”