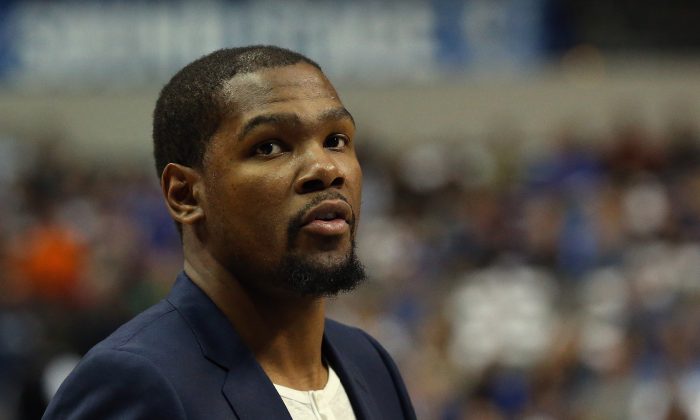 Kevin Durant and a slew of other NBA stars are missing more time due to injury this season than the last five seasons.

While the number of injuries leaguewide is slightly down this season from the last, and also down from 2011-12 and 2010-11, stars have seen injuries slightly rise when compared with the five previous seasons.

The high number of injuries among stars is shown further by ESPN by analyzing the percentage of games that incumbent All-Stars play in a season, dating back to 1978.

Prior to 2010-11, incumbent All-Stars had missed more than 20 percent of their games just twice–in 1997-98 and 2004-05. But these same types of players have missed more than that in each of the seasons since, reaching a peak last season to miss nearly 25 percent of the games, led by Bryant–who only played six games–Brook Lopez, and Rajon Rondo.

“It’s too early to draw any conclusions from this trend, but it certainly has to trouble the league,” Kevin Pelton noted. “As entertaining as the 2014-15 season has been, it could be even better with something closer to full participation from star players.”

This season, the Lakers have missed the most general production due to injuries, including the ones to Bryant, rookie Julius Randle, and veteran Steve Nash. But the teams that lost the most production–or the best players–to injury are the Indiana Pacers, who have been without Paul George all season; the Thunder, with the majority of the team missing at least a couple of games; and the Minnesota Timberwolves, who went without Ricky Rubio and Kevin Martin for much of the season.

On the other end, the Suns lost the fewest games to injury this season and has the lowest count over the six years studied.