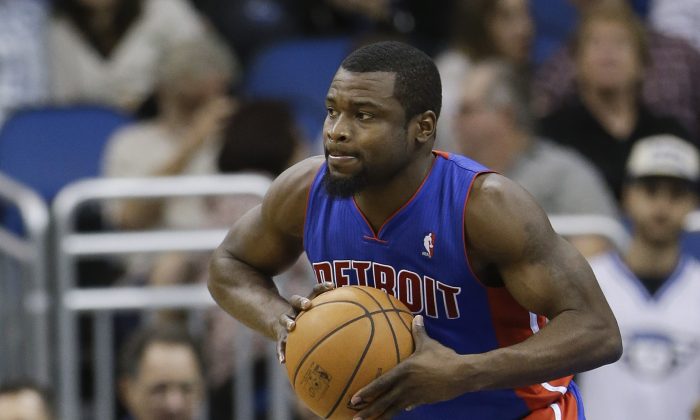 A number of players are starting to head back from China, where they’ve been playing for the last several months, while others who got bought out from NBA teams are available for other teams to pick up.

Many playoff-bound squads or those in contention are looking for a player to bolster their roster, including the Washington Wizards, Los Angeles Clippers, and Dallas Mavericks.

Multiple players have already ended up on new teams, including Amare Stoudemire, John Lucas III, and Michael Beasley. Even some teams not in playoff contention, such as the Knicks, are looking for young players they can “try out” for next season.

Check out the top players still available below.

The combo guard can play point or shooting guard, and is coming off an impressive season in China. Bynum operated Guangdong’s offense, averaging 22.9 points per game and 7.3 assists per game.

“A hugely experienced pick and roll operator, Bynum can also open up space for a shot thanks to his lethal crossover,” noted Andrew Crawford of Sheridan Hoops.

Another combo guard who had an outstanding individual season in China, the 26-year-old led the league in assists with 8.2 a game and finished third in scoring at 37.9 points per game.

Jones’ biggest weakness is likely his three-point shot. But he does have previous NBA experience, last playing for the Mavericks in 2012.

The 29-year-old point guard is possibly the best three-point shooter available on the market, provided Ray Allen doesn’t suit up. “An experienced shoot-first point guard, Dentmon’s biggest skill is being able to pull up and sink the three-point shot over and over again,” Crawford said.

Dentmon just finished his season in China and has spent time in the NBA and D-League, including for the Dallas Mavericks in spring 2013.

If teams want someone younger who also has a nice stroke, they can target the 24-year-old Canadian. Heslip spent time in the D-League earlier this season, before signing with Igokea of the Adriatic League.

With the team, he won the Bosnian Cup–and was named MVP of the final game. after scoring 26 points.

Lamb, with a career 39 percentage from 3-point range in 100 games in the NBA, could be the most attractive option for teams looking for a shooter. Lamb, 23, was chosen in the second round of the 2012 draft but hasn’t been able to catch on with a team.

He currently plays for the Westchester Knicks in the D-League.

No one knows for sure whether Allen is going to retire or suit up this season, but as time goes on it’s looking increasingly unlikely that the 38-year-old will play.

Allen has attracted wide interest, including from the Wizards, Warriors, and Clippers.

Another player whose China season recently ended, Adrien received uneven playing time there but still notched 13.6 points per game and 11.3 rebounds per game.

Adrien, 29, is “a possible signing for teams seeking an athletic frontcourt addition,” noted Shams Charania of RealGM, who noted that Adrien is back in the United States. Adrien played for the Timberwolves and Rockets last season.

“Physically stronger than almost anyone else in the league, Tyler could get his points down low, but he also helped Shanxi clean up on defense and was rebounding at a fairly regular pace,” noted Crawford. “The American, still only 24, could be an interesting project for several NBA teams.”

Fresh off being waived by the 76ers, the 27-year-old underperformer could get yet another shot from another team as seven-footers who can play good basketball are rare. McGee still has good games sometimes despite being underwhelming most of the time.

McGee would likely take a low salary considering the waive, as opposed to a buyout, left his huge contract intact in terms of money. Marc Stein of ESPN says that McGee will clear waivers on Wednesday but won’t rush choice on next team. “Mavs ‘seriously interested’ in JaVale McGee but word is list of interested teams stretches well beyond Dallas,” he added.

Perhaps the most puzzling aspect of free agency so far this midseason is that Blatche hasn’t landed with a team. The 28-year-old was a solid contributor with the Nets last season, averaging 11.2 points and 5.3 rebounds in 22 minutes a game. He also played pretty good in the playoffs.

Blatche has been linked to the Nets, and could end up back in Brooklyn, though the team has been playing small lately.