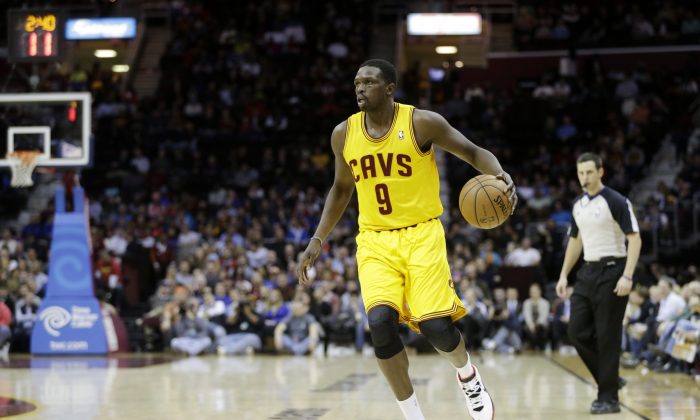 The NBA free agent signing continue, with many of the top ones already off the board after a flurry of weekend activity.

Anthony took an estimated $122-$123 million contract instead of the maximum $129 contract, reported the New York Post.

Phil Jackson confirmed that Anthony structured the deal to give the Knicks more cap space in 2015, when the team is expected to pursue a number of free agents. “It is believed he didn’t take his annual 7.5 percent raise in Year 2 and may have taken a tiny pay decrease. Under collective bargaining agreement rules, a player can receive as high as a 7.5 percent pay raise annually,” it reported.

“He did exactly what we kind of asked him to do,” Jackson said. “Give us a break in the early part of the contract when we have some wiggle room — hopefully big enough wiggle room — next year when we can exploit it.”

Evan Turner, who had a good start to the year at the Philadelphia 76ers before languishing on the Indiana Pacers bench, has received interest from the Boston Celtics and Minnesota Timberwolves.

ESPN reported the interest on Monday.

Now that the top free agents are off the board, the likes of Turner are getting pursued.

Caron Butler and D.J. Augustin agreed to deals with the Detroit Pistons, a source said.

Detroit has missed the playoffs the last five seasons, and the Pistons recently hired Stan Van Gundy as their new coach and team president. The first order of business this offseason has been to add some perimeter help for the team’s imposing set of big men.

Augustin was waived by Toronto early last season, but the 26-year-old point guard caught on with Chicago after that and ended up averaging 13.1 points for the season. He shot 40 percent from beyond the arc.

The Pistons have also agreed to terms with Jodie Meeks, who shot 40 percent from 3-point range with the Los Angeles Lakers last season.

The Detroit Pistons are trying to make another move late Sunday. The team is close to signing Caron Butler.

Butler came off the bench for the Oklahoma City Thunder last year.

D.J. Augustin, the Chicago Bulls sparkplug, has signed a deal with the Detroit Pistons.

The contract is for two years and $6 million, a source told David Aldridge of NBA.com.

Augustin came off the bench for the Bulls last year behind Kirk Hinrich and Jimmy Butler, providing some much-needed offense.

Chris Bosh says that he’s “excited for the challenge” that the Miami Heat have ahead of them.

Bosh will sign a $118 million, five-year deal to stay with the Heat, a formality only held up by the logistical challenge presented by him being in Ghana right now and with more exotic stops on a family vacation still to come before returning home.

When he finally puts pen to paper, the Heat locker room will essentially become his — and in an interview with, Bosh said that while it’s a shock to realize James is no longer with Miami after four seasons, he’s ready to have that voice.

“I can’t lie to you: I’m excited. I’m excited for the challenge,” Bosh said during a break from NBAAfrica duties. “I want to step up to the challenge. I feel this is a chance to prove to myself and others that I can still do this.”

“I want to see if I can do what’s necessary to go in there and win every night. That’s the challenge of being a leader. It excites me. It’s been a long time and I feel like I’m a much better player and a leader now, so it’ll be fun.”

Bosh had that role in Toronto before coming to Miami, then was perceived as a No. 3 behind James and Dwyane Wade when they teamed up in 2010 to begin the “Big 3” era with the Heat.

Now, Bosh will be one of the league’s highest-paid players over the next five seasons, and with that comes a responsibility role to lead.

“It’s a very different process,” Bosh said, “but I think I know how to do it.”

The Chicago Bulls have finalized the deal with European star Nikola Mirotic, whom they drafted in the first round in 2011.

The deal will be three years, $17 million-plus, according to Wojnarowski.

“I am very happy and excited to announce that next season I will be playing with the @chicagobulls,” Mirotic told fans via Twitter. “Today I fulfill a dream. #BullsNation.”

According to Yahoo Sports’ Adrian Wojnarowski, “Houston decided that the contract was too constraining to future roster building to keep Chandler Parsons. He goes to Mavs now.”

The Rockets recently inked Trevor Ariza to a deal, but it’s debateable whether Ariza is an upgrade over Parsons.

Parsons tweeted Sunday after he said he heard from Rockets general manager Daryl Morey and owner Leslie Alexander about the team’s decision.

“Nothing but utmost respect for them, the fans and the city of Houston. THANK YOU for your support!,” Parsons wrote before following that with another farewell tweet.

“Houston will always have a special place in my heart and I will never forget the memories. My teammates, I love you, thank you,” his second entry read.

Kirk Hinrich was being pursued by the Charlotte Hornets but not so much anymore.

Hinrich stepped up in a starting role after Derrick Rose got hurt again last year.

Mike Miller is being pursued by multiple teams, including the Cleveland Cavaliers and Denver Nuggets.

Miller reportedly wants to reunite with LeBron James, which may be the deciding factor.

The Charlotte Hornets have signed free agent Brian Roberts to a two-year deal.

The deal is worth $5.5 million-plus, sources told Yahoo.

The Miami Heat are trying to re-sign a number of players, primarily Dwayne Wade, Udonis Haslem, and Chris “Birdman” Andersen.

Bleacher Report’s Ethan Skolnick said that the holdup on Wade and Haslem is about years, not money, as the Heat are trying to get as many players as they can to take two-year deals.

In addition, the Heat “haven’t ruled out returns of Chalmers, Jones, Oden, Lewis or even Beasley” he said. Deng, Danny Granger, and Josh McRoberts are the only free agents the Heat have signed so far outside the team.

Lance Stephenson hasn’t made a decision yet but Paul George wants him back with the Indiana Pacers.

“I was a restricted free agent so I didn’t have to go through this,” George told the Indy Star at his youth basketball camp at Avon High School on Saturday. “So this is really up to Lance but I do want Lance coming back. I love being teammates with Lance. If he needs any words or anything to talk about, I’m always here for Lance.”

George has talked to Stephenson a little bit since the season ended.

“I know how stressful this can be,” George said. “I don’t want to add more to it. Whenever he wants to come out to me, I’m there.”

The Dallas Mavericks offer sheet is for three years and $46 million.

The Rockets have until midnight EDT on Sunday to match the sheet.

Luol Deng has agreed to a two-year deal with the Miami Heat.

Deng, who played for the Cleveland Cavaliers and Chicago Bulls last year, signed a contract worth $20 million that has a player option for the second season, league sources told RealGM.

Deng was pursued by teams including the Atlanta Hawks and Dallas Mavericks.

The Cleveland Cavaliers really want Kevin Love, but really don’t want to give up Andrew Wiggins.

Paul Pierce  signed with the Washington Wizards, but his departure doesn’t mean Kevin Garnett is done.

Garnett’s decision on whether to retire or return for the final year of his contract “was never dependent on Pierce’s final destination and he has remained in contact with the #nets,” reported Alex Raskin of the Wall Street Journal.

Michael Scotto of Sheridan Hoops added that the Nets expect Garnett to return.

The Knicks can pay the All-Star forward nearly $130 million over five years, though Anthony has said he would be open to taking less than the maximum salary if it would help build a winning team, per AP.

Paul Pierce signed with the Washington Wizards in a deal announced late Saturday.

Pierce, who spent last season with the Brooklyn Nets, was signed to a two-year, $11 million deal.

The second year of the contract is a player option so that Pierce, 36, can hit the free agent market again next summer if he wants.