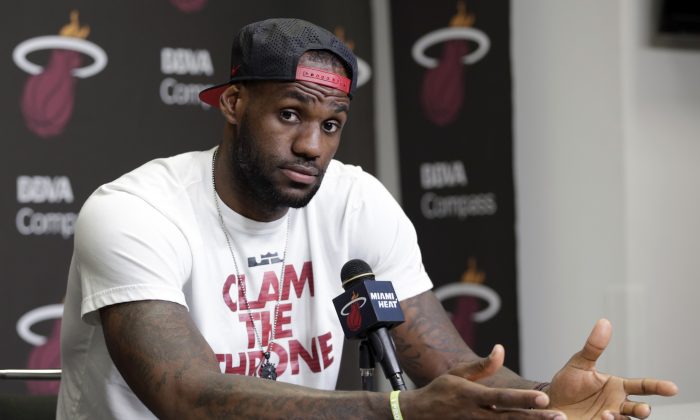 In this June 17, 2014 file photo, Miami Heat's LeBron James gestures as he answers a question during a news conference in Miami. (AP Photo/Alan Diaz, File)
NBA

The NBA free agent rumors keep flying, as many have not yet agreed to deals partly due to Carmelo Anthony and LeBron James not choosing where they’re going as of Wednesday.

Check out the latest rumors and rumors below.

LeBron James is going back to the Cleveland Cavaliers.

James told Sports Illustrated Friday that he’s decided to go home. It’s a move that would have seemed unfathomable four years ago, after the venomous fallout that followed his decision to leave Cleveland for the Miami Heat.

James told SI in a first-person story: “My relationship with Northeast Ohio is bigger than basketball. I didn’t realize that four years ago. I do now.”

He spent his first seven NBA seasons in Cleveland. In four years with the Heat, he went to the NBAFinals four times, winning two championships. And now heads back to Cleveland to see if he can finally deliver on his promise of winning a crown for that title-starved city.

James is from Akron, Ohio, not far from Cleveland.

“Before anyone ever cared where I would play basketball, I was a kid from Northeast Ohio. It’s where I walked,” James told SI. “It’s where I ran. It’s where I cried. It’s where I bled. It holds a special place in my heart. People there have seen me grow up. I sometimes feel like I’m their son. Their passion can be overwhelming. But it drives me.

The Mavericks and Rockets, among other teams, were also pursuing Carmelo Anthony but seem to have failed.

The star forward has narrowed down his choices to the Knicks, Lakers, and Bulls, a source told the NY Daily News. He could team up with Kobe Bryant in Los Angeles or a strong contender in Chicago, but he could also return to New York, where new team president Phil Jackson is already making moves.

A friend told the News that Anthony is still debating his decision and is “torn” over what to do.

Anthony lives in southern California during the offseason and is friends with Bryant, while his wife La La is a budding actress who would be comfortable moving west. Anthony is currently in Los Angeles.

The Bulls have the best chance to immediately contend for a championship, although the health of Derrick Rose is always a concern. But that would be the most complex deal, perhaps needing a sign-and-trade with the Knicks.

On Friday, a source close to Anthony told Bleacher Report that the Melo decision could come today.

His choices have been narrowed down to the New York Knicks and Chicago Bulls–the Lakers are notably out, according to the source.

The Houston Rockets were offering a four-year, $88 million deal.

The move by Bosh is surprising considering the Rockets would have instantly become serious title contenders with him on board. The Heat will have taken a step backward after the LeBron loss.

Bosh could have played power forward in Houston, his more natural position.

Wade is even more likely to stay with the Heat despite LeBron James’ departure.

Wade has played his entire career with the team.

Wade opted out of his contract, like Bosh and James, to give Miami more flexability.

The Heat are pushing to sign him on a deal shorter than five years, according to Yahoo.

The Charlotte Hornets are going all out to sign restricted free agent Gordon Hayward, agreeing on a maximum offer sheet with Hayward that would pay the small forward $63 million over the next four years, a person close to with the situation said Wednesday.

The Utah Jazz would have three days to match the deal once Hayward officially signs. The person commented  on condition of anonymity because Hayward can’t officially sign the offer sheet until Thursday when the league lifts its moratorium on signing free agents.

The person also said the Hornets have spoken to representatives for free agents Marvin Williams and Brian Roberts and will meet with them later this week. Williams would give the Hornets another option at forward and Roberts would fill the backup point guard spot behind Kemba Walker.

It’s unclear at this point if the Jazz would match the offer to keep Hayward or consider a sign-and-trade with Charlotte.

Hayward, who visited with the Hornets this week, averaged 16.2 points, 5.1 rebounds, 5.2 assists and 1.4 steals last season for Utah. Hayward has spent all four seasons in the NBA with the Jazz. He shot 41.3 percent from the field and 30 percent from 3-point range in 77 starts.

If the Hornets are able to land Hayward, it’s unclear what that might mean for small forward Michael Kidd-Gilchrist or shooting guard Gerald Henderson.

The 6-foot-8, 220-pound Hayward is capable of playing both positions.

Kidd-Gilchrist, the No. 2 pick in the 2012 draft, is considered a strong defender but trying to revamp a hitch in his jump shot. Henderson hasn’t emerged as a dominant shooter as the team hoped when they signed him to a three-year, $18 million contract extension last year. The Hornets are high on small forward Jeff Taylor, their second-round pick in 2012, who is coming off a torn Achilles tendon.

After a slow start in free agency, the Hornets are picking up the pace. The 6-foot-9, 237-pound Williams, the No. 2 pick in the 2005 draft, played at North Carolina where he helped the Tar Heels win a national championship as a freshman and could be a backup option if they don’t land Hayward.

Roberts has spent the past two seasons with New Orleans. He started 42 games last season averaging 9.4 points and 3.3 assists while shooting 94 percent from the free-throw line.