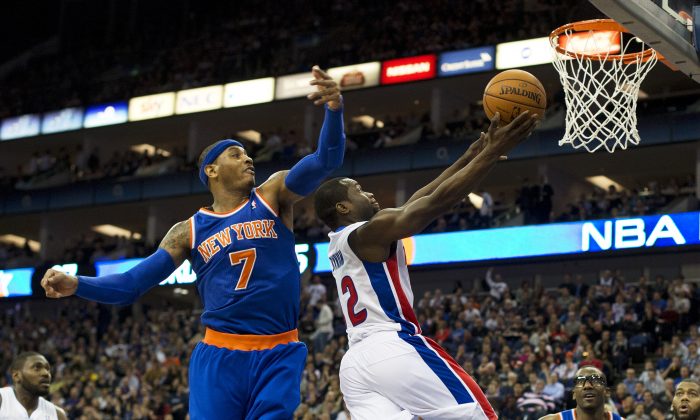 New York Knicks' forward Carmelo Anthony (2nd L) tries to block the ball as Detroit Pistons' guard Will Bynum (C) goes to the hoop during their NBA basketball game at the O2 Arena in London on January 17, 2013. (AFP/Getty Images)
NBA

The NBA trade rumors are heating up, but free agent signings are currently happening at a much faster pace.

Multiple players playing in China have been reported on team’s radars, while several teams have made new 10-day signings. Check out the latest buzz below.

The San Antonio Spurs will not sign forward JaMychal Green to a second 10-day contract.

The 24-year-old played four games with the Spurs.

Yahoo reported that Memphis Grizzlies, New York Knicks, Chicago Bulls, Milwaukee Bucks and Portland Trail Blazers have shown interest in Green, who could return to the D-League if another team doesn’t sign him by the weekend.

The Minnesota Timberwolves have signed forward Lorenzo Brown to a 10-day contract.

Brown made it to shootaround, and the T-Wolves should finalize the signing before Wednesday’s game against the Celtics.

Brown will help fill in for Mo Williams, who will miss the game for personal reasons. Without Williams and the injured Ricky Rubio, rookie Zach LaVine was the only healthy point guard left, noted the Pioneer Press.

Brown was the 52nd pick in the 2013 draft for the Wolves, but was cut in training camp. He played for the 76ers last season and has been playing for the D-League this season. He’s a 6’5″ combo guard.

The Utah Jazz also signed a D-League player to a 10-day contract. Utah signed Chris Johnson, a 24-year-old, 6’6″ swingman who has been averaging 20 points in the D-League.

Johnson started the season with Philly but was waived on November 15. The team announced the signing.

The Miami Heat have also called up guard Tyler Johnson from the D-League on a 10-day contract, reported RealGM. Johnson has averaged 18.5 points, 4.3 rebounds, and 4.3 assists there.

He played for the Heat earlier this month on a 10-day contract.

A number of players currently playing in China are starting to be connected to teams.

Will Bynum has received interest from the Cleveland Cavaliers and Washington Wizards, reported Shams Charania of RealGM. He should be available in late March.

Andray Blatche is likely the best big man that isn’t currently with an NBA team, apart from the still-recovering Emeka Okafor.

Blatche is averaging 30 points and 15 rebounds a game for the Xinjiang Flying Tigers, which may not make the CBA playoffs. That would make his return possible in early February.

“When he does return, Blatche will be bringing with him a real scoring streak. While he has been a solid low post presence, the big man also has shot 39 percent from 3-point range. It has helped Blatche that Xinjiang paired him with Zhou Qi, one of the best rim protectors in China and a future NBA player in his own right. With Zhou handling much of the dirty work on defense, the American has been able to focus on getting buckets,” noted Sheridan Hoops.

Another familiar player who could latch back onto an NBA team–Michael Beasley, who is averaging 29 points a game for the Shanghai Sharks. Beasley played for the Miami Heat last season, but failed to sign with a team this season.

“If he were to land with an organization that has a strong locker room culture, Beasley would be good for 7-10 points off the bench on most nights. As always, Beasley is a gamble but remains one worth taking based on his CBA form alone,” Sheridan noted.

Ray Allen is probably the biggest free agent out there, but there’s still no concrete update on him.