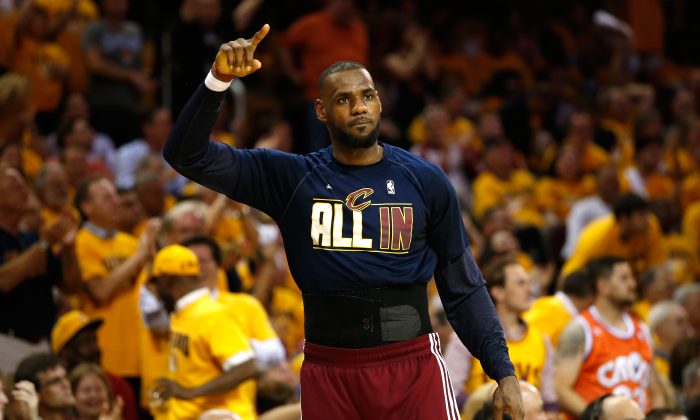 LeBron James came back to Cleveland Cavaliers to bring a trophy to Ohio. Now is his chance. (Gregory Shamus/Getty Images)
NBA

After an entire week off, the NBA Playoffs continue Thursday night as the Cleveland Cavaliers and Golden State Warriors start a hard-to-predict NBA Finals matchup in Oakland.

Why the prediction difficulties?

Before the season started, few people would have picked Golden State to roll through the regular season with the best record in the league (67–15) and then come out of the loaded Western Conference in the postseason. But they did.

Normally even the best of teams fold when a crucial player goes down and the team chemistry is lost.

The Cavaliers, after finding out in a Sports Illustrated article that LeBron James was signing with them (his former team) to deliver a title to the city he still loves and then trading an arm and a leg for Kevin Love, were the preseason favorites in the East. Yet, all bets went out the window when Love was lost to injury in the opening round against Boston.

If that wasn’t enough, Kyrie Irving missed half the Atlanta series with a knee injury—yet the Cavs, without two-thirds of the Big Three, still rolled to a sweep of the top-seeded Hawks.

How did they do it? Normally even the best of teams fold when a crucial player goes down and the team chemistry is lost. But the Cavs used role players who turned out to be better than they thought (and another awesome showing by the four-time MVP LeBron James), to come through an albeit weak Eastern Conference.

When Love went down, Cleveland coach David Blatt inserted Tristan Thompson into the starting lineup, and the 6-foot-9 center has shown what they’ve had all along in him. One of the best offensive rebounders in the league, Thompson’s hustle to keep possessions alive and block shots was critical in the last two series—especially late in Game 3 against Atlanta when he made a game-saving block late in overtime and then came up with a crucial offensive rebound in overtime that directly led to a LeBron James three.

Meanwhile, guards Matthew Dellavedova (great defense), J.R. Smith (great shooting), and Iman Shumpert (a little of both) have more than made up for Kyrie Irving’s loss.

Golden State, on the other hand, resisted offering too much for Love last summer—namely Klay Thompson—but added rookie coach Steve Kerr, and the talented former player’s leadership has improved the team by 16 wins over last year’s playoff squad.

While MVP Stephen Curry has been his usual stellar self, Kerr convinced All-Star forward Andre Iguodala to come off the bench so that the team could use emerging defensive specialist Draymond Green against the opponent’s best offensive player from the opening tip.

Related Coverage
Stephen Curry: The Curse of the MVP?

The formula worked in the regular season just as well as it’s worked in the postseason as the Warriors have suddenly become a dangerous team, dropping just three games in three series on their way to the franchise’s first Finals in 40 years.

Now the question is, are they ready to take the next step and win the title—something LeBron has done twice in the last three years?

On paper, Golden State is the better team. All they have to do is put Green on James and hope Curry’s incredible shooting is no match for the defense Dellavedova and Shumpert provide.

But titles aren’t won on paper—though maybe they can be announced in a popular sports magazine. Cleveland in Six.